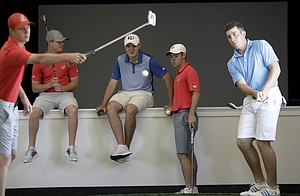 A whopping 24 players, including two current University of Kansas golfers, tied after two rounds of stroke play for the 64th and final spot in match play in the U.S. Amateur.

The 24 players, including KU junior Andy Spencer and sophomore Ben Sigel, all finished stroke play, which consisted of a round at Pebble Beach and a round at Spy Glass Hill, at 4-over par.

The playoff started at 9:30 a.m. and took two holes to complete after two players advanced with a birdie.

The playoff started at No. 17 at Pebble Beach, a par 3, and concluded on No. 18, a par 5. Neither Spencer nor Sigel made it past the first hole.

Playing in the second foursome to tee off in the playoff, Spencer pulled his tee shot well left of the green into a deep rough, missed a long putt on a misread and picked up.

Sigel teed off in the third foursome, and reached the front of the massive green. He initially took a few practice swings with a wedge and then put that club back in the bag in favor of a putter. He left the putt well short, then left his par putt of about 75 feet, which, as it turned out, was meaningless anyway, an inch short.

Another player left in the same spot later in the playoff hit wedge from there and left it a few feet from the pin. Had he sunk it, he would have incurred a two-stroke penalty anyway because he had suffered a brain cramp and left the pin in.

Jacob Bergeron emerged from the playoff victorious with a bogey 6 on No. 18, knocking Peter Quest, who knocked his second shot into the ocean, out of match play. Quest missed his 5-foot bogey putt.

Bergeron earned the No. 64 seed in match play and advanced to a first-round match with Daniel Hillier, 19, of New Zealand. By the way, Hillier is not a brother to KU golf team brothers Charlie and Harry Hillier.

The playoff for the final match-play spots in the 118th #USAmateur at Pebble Beach. https://t.co/mr3jFk3GzZ

I saw Hillier from New Zealand on the leaderboard and tried to figure out if he was of any relation to the Hillier brothers. Guess not!