Kansas track and field athletes off to quick starts 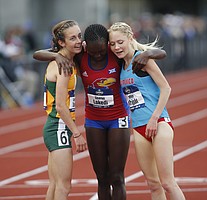 The basketball team isn’t the only Kansas athletic program to make a national splash this spring. KU is No. 12 in the nation in men’s track and field, per the first in-season poll released earlier this week by the The U.S. Track & Field Cross Country Coaches Association.

Hussain Al Hizam has the fourth-best mark in the pole vault (5.60 meters, 18-feet-4.5 inches). Nick Meyer, Paulo Benavides and Kyle Rogers also rank in the top 50 nationally in the pole vault. Sophomore Bryce Hoppel ranks fifth in the 800 meters, Dylan Hodgson is ninth in the 3,000-meter steeplechase and Joel Long has the 22nd-best high jump. Brandon Lombardino is 35th in the shot put.

The Kansas women are ranked No. 38.

Sharon Lokedi broke her own school record in the 10,000-meter run with a time of 32:21.19 at the Stanford Invitational. It’s the third-fastest time in the NCAA this season.

Laura Taylor (fifth) and Andrea Willis (eighth) are among the nation’s top pole vaulters and LaTyria Jefferson ranks seventh in the long jump.

Let's have a good season!