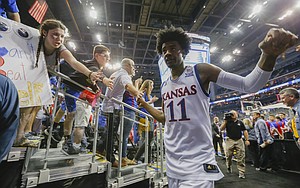 Now that the Sixers moved into the No. 1 slot of the NBA draft and the Lakers reportedly traded their point guard, D’Angelo Russell, clearing the way to select a point guard (Lonzo Ball or De’Aaron Fox) with the No. 2 pick, all the intrigue shifts to the Celtics and what they will do with the No. 3 pick.

Celtics general manager Danny Ainge and coach Brad Stevens are of like mind in that they put a premium on intense, defensive-minded competitors. Nobody in the draft fits that type better than Josh Jackson.

Ainge fueled the Jackson-to-the-Celtics speculation by saying, “There is a good chance the player we take at No. 3 will be the exact player we would have taken at No. 1.”

But Jackson apparently doesn’t want to become a Celtic and reportedly has refused to work out for the organization without an assurance that he will be chosen by them and not traded. But why would the Celtics, or any team for that matter, make any such assurance to any player?

Duke’s Jayson Tatum has worked out for the Celtics, which leads some to believe that since he wants to go there and Jackson apparently does not, the Celtics might just take Tatum. Not buying that. Jackson’s a great defender and Tatum’s lateral quickness could prevent him from ever developing into an even average defender.

Should the Celtics decide to deal the pick, no shortage of franchises interested in Jackson would make offers. The Kings hold the fifth and 10th selections.

The Knicks and Bulls reportedly are high on Jackson.

One name of strong interest for Knicks and Bulls is Josh Jackson https://t.co/YUQ7kgjfeC

The Knicks reportedly would entertain trade offers for Kristaps Porzingas, the Bulls for Jimmy Butler.

CSN is reporting that Jackson's camp, as everyone else, were convinced Boston was taking Fultz. The trade of the pick came as a surprise and scheduling prevented a workout. His medicals have been sent there.

This is the first rumor I've heard that Jackson does not want to play there or refused to workout without assurances.

Based on other sites it does not sound like the rumor is true. Can't imagine why Jackson would not want to play for the Celtics after Pierce became legend in Bean City.