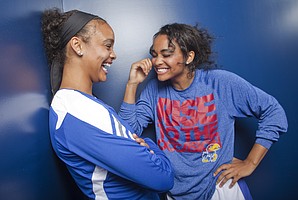 In case you’re wondering whatever became of the Gonzalez twins, Dakota and Dylan, after the transferred from Kansas to UNLV to continue their women’s basketball careers, they have moved on again, this time taking a different path to fame.

The twins bypassed their fifth, and final, year of college eligibility, graduated and embarked on a music career.

The much photographed and photogenic twins who have nearly two million followers on their joint Instagram account, didn’t stand out much from most Big 12 freshmen trying to find their way in a competitive conference during their time at Kansas.

Their careers took off once they hit Vegas. Dakota led UNLV in scoring in both of her seasons there, averaging 13.8 and 13.3 points, and Dylan averaged 5.4 and 9.9 points in her two seasons in the desert.

They have been celebrities since their high school days and drew curiosity seekers to their games, including rapper Drake.

The twins, rhythm and blues artists, have released their first EP, “Take 1,” on SoundCloud. In an interview that can be found at slamonline.com, they cited frustration with NCAA rules that restricted what they could do with their music careers as the driving force behind foregoing the 2017-18 season.

She added: “Playing a collegiate sport is a job that you don’t get paid for like a job. If you’re trying to build a foundation for yourself in another avenue, it’s nearly impossible because you don’t have the time to do it, nor are you allowed to do it.”

Dakota said that being a student-athlete under the NCAA’s umbrella is tougher than most believe.

“To be very blunt, a lot of people don’t see the behind-the-scenes type of actions that go along with it,” she told slamonline.com. “People always ask why no one has spoken out if it is such a big problem. . . . Let’s say you have a job and are working to survive, why would you go start slandering your boss? So you can get fired or have some consequence come your way? You’re just not going to do that.”

As a freshman in 2013-14 at Kansas, Dakota averaged 4.4 points in 17.3 minutes and appeared in 30 games, making four starts. Dylan appeared in nine games, played 25 minutes and scored 10 points.

good for them. it is the way it is. for female athletes and those in sub par ratings sports it is better to follow another path to make money. especially if you're talented and driven.