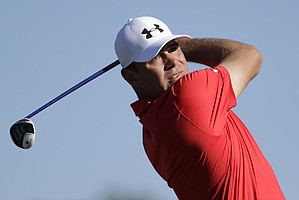 Gary Woodland watches his tee shot on the second hole of the South Course during the final round of the Farmers Insurance Open golf tournament Sunday, Jan. 29, 2017, at Torrey Pines Golf Course in San Diego. (AP Photo/Gregory Bull)

Gary Woodland heads across the pond Saturday and will arrive in England on Sunday, early enough to get adjusted to the time change and log a few days of work with instructor Butch Harmon.

After taking a break for the birth of his and wife Gabby’s son Jaxon, Woodland returned to competition last weekend and encountered mixed results at the Greenbrier Classic.

He did his best work on the back nine of the second round. Standing a few strokes on the wrong side of the projected cut line with seven holes left, Woodland caught fire, carding birdies on three of the next four holes, then making par the rest of the way in to survive the cut.

He finished 57th at 1-under par and has been trying to regain the form he showed early in the 2016-17 season, when he placed in the top six in 4 of 7 events from early Nov. to late February.

“I was feeling as good as I’ve ever felt on the golf course, just excited to play,” Woodland said during a recent interview at Twin Oaks in Eudora. “And that happens when you play well. When you see shots, and you see certain golf courses that usually aren’t set up great for you and you just get out there and feel like this golf course is made for you, that’s the feeling you want every week, trying to make every course your home course.”

He’ll try to make Royal Birkdale Golf Club in North West England his home course next week in the British Open, even though he never has played it.

“I hear it’s great,” Woodland said. “I hear from talking to Butch that it’s a great golf course for me. He’s obviously been there numerous times. I’m excited to get over there and get some work in.”

Woodland never has been one to be shy about working on his golf game. Golfers at Eagle Bend last month had to pinch themselves to make sure they weren’t dreaming when they saw the man who currently ranks 26th on the PGA money list hitting shot after shot out of the tallest fescue he could find in preparation for the U.S. Open at Erin Hills in Wisconsin.

Woodland talked about what he has been working on lately.

“We’ve really got the golf swing right, so we’re trying to focus on driver, focus on timing, trying to get rid of some of that lag that I’ve had for so long, trying to slow that down a little to drive the ball straighter, drive the golf ball in play so I can hit more drivers,” Woodland said.

Armed with one of the fastest swing speeds in the world, driving it straight is a tough task because the slightest glitch exaggerates his misses.

“Obviously, when I’m driving it in play I’m playing a game that a lot of guys aren’t playing,” he said. “You’ve seen it with Dustin Johnson the last two years. He focused on driver for a long time. Now he’s one of the best drivers we’ve seen."

The straighter Woodland can hit his driver, the more wedges that puts in his hands for second shots. Woodland’s wedge game has come a long, long way.

“That’s been a huge emphasis,” he said. “We ended up buying a Trac Man so I could work on distances. The whole deal is distances, distance control. So I’ve hit more wedges this year than I ever have. I can tell when I don’t do it for a week (during his break as a new dad).”

His improvement in wedge play has been easy to spot.

“We’re amazed now in how good my misses have been,” Woodland said. “Obviously, every time I hit one well I can get it close, but my misses now are giving me a chance to still make putts and still make birdies.”

As a putter, Woodland has gone through hot streaks and cold ones. Based on the shooting touch on display on Youtube from his high school basketball days, Woodland has the touch to become a terrific putter — the skills are related, regardless of what anyone might tell you — it’s just a matter of finding the right key to getting that touch to bubble to the surface the way he did when he won the Transitions in 2011.

Woodland said he plans to pick the brain of Harmon and veterans in the field about the nuances of Royal Birkdale.

As Brooks Koepka showed in the U.S. Open, when a big hitter drives them straight and gets hot with the putter, look out! Watching Koepka destroy the field in the U.S. Open reminded me of watching Woodland when he’s on top of his game.

“Very similar,” Woodland agreed. “We both hit it a long way. When we putt well we seem to play well. We both like to play aggressive. When he gets in grooves like he is right now he’s obviously playing some good golf. You could see it coming. He played well a couple of weeks before that as well. It’s all confidence out here. We can all play. Once you get that confidence rolling, you’re pretty hard to beat.”