Film room: Initial impression of Jason Bean based on his performance against Louisiana Tech 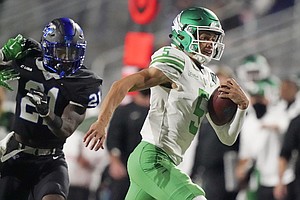 Bean has already demonstrated what he can do at the collegiate level after playing in 15 games for the Mean Green over the past two seasons. Bean even started in seven of 10 games in 2020 as a redshirt sophomore.

Due to his level of experience compared to the rest of the quarterback room, Bean has a real shot to be the Week 1 starter for the Jayhawks even though he won’t be joining the team until the summer.

Since Bean won’t be ready to show what he’s got this spring, let’s look back on some of his college tape to see what kind of player the Jayhawks could be getting. I wanted to start with the Louisiana Tech game, since Benton Smith mentioned that it was one of Bean’s better statistical games in his story.

This will just be my initial impression based on that one game on Dec. 3, 2020, so it certainly won’t tell the whole story of what Bean has to offer. I’ll just share a few things that stood out to me, and hopefully it helps provide a better idea of what KU’s newest quarterback can do.

Stats from the Louisiana Tech game: Let’s provide necessary context first. Bean went 17-for-30 through the air in a 42-31 home loss to Louisiana Tech. He threw for 231 yards to go along with three touchdowns and one interception.

Per NCAA premium stats over at Pro Football Focus, Bean had a season-best 92.2 passing grade in that game and a season-worst 51.5 rushing grade. Here is his passing chart for that particular contest via PFF: 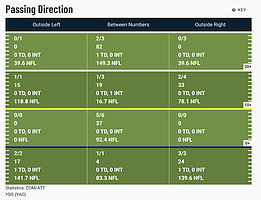 Right away, the chart tells us that the number of passing touchdowns in this game might be inflated a bit because two of them came on screen passes. While there is certainly nothing wrong with that, it just wasn’t what I was expecting when I sat down to watch this game.

Both screen passes went to North Texas wide receiver Jaelon Darden, who is a NFL prospect in this year’s draft class and the real reason video of this game is made available. The first score came on the left side, capping off the second drive of the game.

3 and 1 Screen pass TD to Darden by Shane Jackson

North Texas then ended the next possession with another screen touchdown pass, this time on the other side of the field.

Again, there is nothing wrong with converting on a screen pass. It was just worth pointing out right away. And While Mike DeBord’s offense remains a mystery entering 2021, it is probably safe to assume screen passes will be a part of his game plan.

If anything, these two plays should be considered promising because Bean did manage to get the ball out quickly and on target. That is something Jalon Daniels struggled to consistently do at times during his freshman campaign.

The first drive of the game was somewhat of a rude awakening.

After picking up a first down on a deep curl, North Texas went back to the air on first down. We obviously don’t know the play, but it looked to be a simple passing concept that consisted of three different options.

First off, Bean has no reason to leave the pocket in this instance. There was no immediate pressure, and it feels like he’s making this more difficult than it has to be by rolling right after his internal clock ran out.

More importantly, Bean misses a wide-open Darden on a seam over the middle. The ball should have been out of Bean’s hand as soon as the safety turned his hips to the opposite side of the field.

I don’t even think the video does it justice, here’s a screenshot: 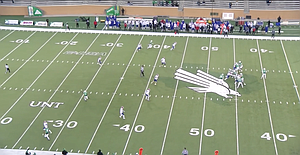 Screen shot of North Texas wide receiver Jaelon Darden waving his hand to signal he's open during a game against Louisiana Tech this past season. Jason Bean, who was the quarterback on this play, has decided to transfer to KU. by Pro Football Focus

So it’s bad all around. Sure, it’s just one play. Bean throws an interception almost immediately after, demonstrating how fickle this game can be. Had Bean hit his future pro WR, the Mean Green would have had points on the board instead of giving their defense a short field.

Showed ability to learn from early mistake in game

All that said, North Texas went back to the seam over the middle based on how the Louisiana Tech safety played it the first time.

During the third drive of the game, Bean connected with Darden on a big chunk play over the middle. Even on this play, I thought Bean could have thrown the ball a tad sooner instead of moving to his right.

But it demonstrated his ability to make an in-game adjustment nonetheless.

More importantly, Bean learns from it right away. This exact throw came two drives later in the game against Louisiana Tech #kufball pic.twitter.com/mZBp5r4q1m

On the first drive of the second half, with the score 35-17 in the opposition’s favor, Bean connected on a touchdown over the middle on 2nd-and-2. It wasn't identical to the original play, but the concept of the slot seam was similar.

This time, Bean drilled Darden for a 33-yard touchdown. Bean does a good job of getting the ball out quickly, even with pressure looming in his face.

Last play from that game worth sharing is Bean’s lone non-screen TD pass. Really good job getting the ball out, with pressure looming #kufball pic.twitter.com/m0jodjrLFf

Bean’s feet can be a blessing and a curse

Bean didn’t actually use his legs as often as usual, so I won’t share any videos. It is obviously Bean’s biggest strength, as he has the ability to extend plays with his feet or pick up big yardage on keepers. He’s fast, which is obvious on tape.

Still, especially in this game, I thought Bean got too used to the idea of extending plays. He left clean pockets. He rolled out when it wasn’t always necessary. And sometimes he was too quick to tuck the ball and run, rather than letting the play develop.

Considering KU’s offensive line struggles last year, a mobile quarterback could be ideal this fall. But trusting your receivers to get open is important, and being comfortable to make a throw before it is there is just as necessary.

Young quarterbacks with good legs can get too used to just making plays out structure or picking up yardages with their feet. It can create bad habits, but it also puts them in bad situations sometimes. In fact, Bean was injured on a late hit in the bowl game against Appalachian State on a quarterback keeper.

It is good that Bean can improvise, but he also shouldn’t get used to trying to make something happen when he doesn't have to.

This is just one game, but it is easy to see why KU wanted him. He’s a mobile quarterback that could be a serious contender to start right away, especially given how young and inexperienced the current quarterback room is at Kansas.

I noticed some inconsistencies within Bean’s base throughout this game, which might explain some of his struggles as a passer at times. He doesn’t seem to always follow through on his throwing motion, and that leads to the ball not always being on target. It is only worth noting, in case these problems persist in other games where Bean has less success.

Overall, Bean has a lot to offer based on the one game I watched closely. I’m not certain Bean is the starting quarterback in Week 1, but I think he is firmly in the mix based on his strengths shown in this game. Maybe that opinion changes based on more information, but I thought this was a strong first impression.

Thanks for this article. I am interested in hearing and reading more about Jason Bean, your opinions, as you have time to digest his film.