Getting to know: Eastern Washington basketball, Round 1 NCAA Tournament 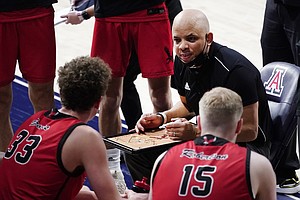 Eastern Washington head coach Shantay Legans talks to his players during the second half of an NCAA college basketball game against Arizona, Saturday, Dec. 5, 2020, in Tucson, Ariz. (AP Photo/Rick Scuteri)

For the first time in 24 months, it is time to take a closer look at a team that Kansas basketball will be facing in the NCAA Tournament.

Unlike when we did our Northeastern breakdown in March of 2019, it doesn’t appear that Eastern Washington is a trendy pick to upset KU this year. Maybe I’m just not paying attention to the right bracket analysis, but it certainly feels like the discussion has been more about the Jayhawks and who they won’t have available this weekend.

But let’s turn our attention to Eastern Washington for the purpose of this blog, and see if the Big Sky champion has what it takes to knock off Kansas in the opening round of the NCAA Tournament. Tipoff for Saturday’s game is slated for 12:15 p.m., and will be televised on TBS.

The Eagles have only lost one game since Jan. 22, and enter the tourney on a four-game win streak. They went 12-3 during conference play after losing their first three games to start the season. One of those losses was a 70-67 defeat to Arizona, as Benton Smith wrote about earlier this week.

KenPom gives Eastern Washington a 17% chance of victory in this game, projecting a 78-67 win for Kansas. After this quick breakdown, we will decide if those numbers seem right and whether or not we should bet on a given side in this one. 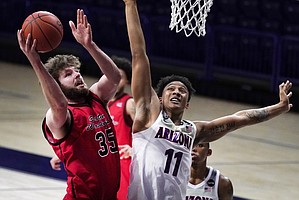 As the Big Sky MVP, Groves will play a huge part in whether or not Eastern Washington is able to earn its first-ever win in the NCAA Tournament.

This season, the EWU big man is averaging 16.4 points and 8.1 rebounds per game while shooting 55.7% from the floor. He’s coming off a 14-point, 14-rebound effort against Montana State in the Big Sky championship.

According to KenPom, Groves takes 28% of Eastern Washington’s shots and has an offensive rating of 116.4. Both of those numbers rank inside the top-200 in the nation. His defensive rebound rate of 26.8% is the 27th-best mark in the country.

Groves came off the bench last year, but has been instrumental in getting the Eagles back to the NCAA tourney for the first time since 2015. 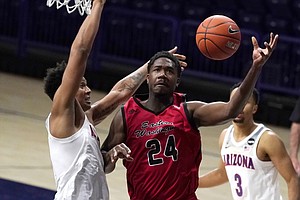 Aiken is almost always on the floor for the Eagles, averaging a team-high 30.4 minutes per game this season.

That’s really because of how much Aiken does for Eastern Washington when he’s in the game. Not only does Aiken average 11.7 points per game, but he also produces 8.5 rebounds and 2.0 assists per contest.

Aiken is coming off back-to-back double-digit rebound performances, and has a total of 42 rebounds over his last four outings. That is certainly something to be concerned about, considering KU will likely struggle on the glass without Jalen Wilson.

Per KenPom, Aiken’s defensive rebound rate of 23.4% ranks 87th among all individual players in college basketball.

While also being one of five players to average in double figures, Robertson makes his biggest contribution as a passer.

Robertson leads EWU with an average of 3.0 assists per contest, as no other player has more than 2.2 assists per game. Robertson has dished out 11 assists over his last three games, a stretch that also included an 18-point performance.

This season, Robertson is averaging 11.3 points and 3.6 rebounds per game. He’s also shooting 46.3% from the floor, which includes a 39.5% clip from long range.

In terms of KenPom numbers, Robertson’s best metric is offensive rating, where he ranks 156th in the country with an offensive rating of 117.6. Robertson is also shooting 85% from the free throw line this year.

ONE THING EASTERN WASHINGTON DOES WELL

Shooting. Eastern Washington ranks inside the top-72 in most shooting metrics, posting a 35.9% clip on 3-point attempts and a 54.2% mark on 2-point attempts. EWU’s effective field goal percentage of 54.1% ranks 37th in the nation.

The Eagles won’t force a lot of turnovers on the defensive end. They have posted a turnover rate of 16.5% this year, a number that ranks 301st in the nation. EWU’s steal rate of 6.8% is 316th in the country.

Kansas a 10.5-point favorite over Eastern Washington on most sportsbooks as of Friday night. Full disclosure: I picked EWU to defeat KU in my lone bracket this year. While that has more to do with trying to find leverage in a pool, I do think Kansas could be tested in this one. So, for my official pick, I’ll take the points in a victory for the Jayhawks.