Getting to know: Iowa State basketball 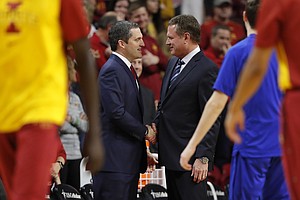 The Kansas men’s basketball team prepares for a rare back-to-back stretch against the same opponent, starting tonight when it welcomes Iowa State to Allen Fieldhouse.

After tonight’s battle in Lawrence, KU and Iowa State will have just one day off before both teams square off again. The rematch will then take place at Hilton Coliseum in Ames, Iowa on Saturday.

There are benefits and challenges for both teams to have to play such a stretch. Fortunately for each squad, they will be on an even playing field in that regard.

These teams are not even in terms of where they are at in the standings, however. While winning the Big 12 is probably off the table, Kansas (13-7, 7-5) is still aiming for a high finish in the conference.

Iowa State, meanwhile, is just looking to get in the win column during league play. The Cyclones are 0-9 against conference opponents after winning just two games in nonconference action. ISU is 2-12 overall on the year.

Bolton has been Iowa State’s best player during a rough season because of what he provides as a scorer.

This season, Bolton is leading the team in scoring with an average of 16.6 points per game while shooting 46.1% from the floor. Bolton has reached double figures in 13 of the 14 games this year for the Cyclones.

Bolton, who has eclipsed over 1,000 points in his career, is actually averaging 20 points per outing over the last four contests. He averaged 14.7 points per game last year after transferring from Penn State, which led to him making the All-Big 12 honorable mention team.

In addition, Bolton leads this year’s Iowa State squad in rebounds (5.3 per game), assists (4.5 per game) and steals (1.8 per game) entering this series against Kansas.

As one of four players to average double figures for the Cyclones, Coleman-Lands is second on the team in scoring ahead of this week’s two-game stretch.

Coleman-Lands, who has played in 13 contests this year, is averaging 11.9 points per game. It’s worth noting that two other ISU players average 11.8 points per outing and 11.7 points per game, so Coleman-Lands’ claim for second-leading scorer isn’t very strong.

The graduate transfer has scored 1,215 points in his career and ranks seventh among active players with 123 career games played. He has reached double figures in all but two games this season for the Cyclones.

Prior to coming to Iowa State, Coleman-Lands was at DePaul for a few seasons after originally starting his collegiate career at Illinois. For his career, Coleman-Lands has averaged 10.0 points per game with this season being his best scoring mark.

Young is fourth on the team in scoring with an average of 11.7 points per contest for the Cyclones.

This year, Young has played in 12 games after missing contests against Oklahoma State and Mississippi State due to health and safety protocols. This is Young’s fifth season with the program after taking a medical redshirt in 2018-19.

Young, who has a wingspan of 7-foot-1 according to Iowa State’s game notes, is averaging 4.9 rebounds per outing to go along with nearly a block per contest.

ONE THING IOWA STATE DOES WELL

The Cyclones have done a solid job at the free throw line, shooting 75.1% from the charity stripe on the year. It is a mark that ranks 52nd in all of college basketball.

As of Thursday morning, Kansas is a 15-point favorite over Iowa State on FanDuel’s Sportsbook. That number is a bit higher than KenPom has it, as his system projects a 78-65 win for KU. KenPom currently projects a 76-67 victory for Kansas on Saturday as well.

In terms of this game, though, the 15-point spread seems a bit too high for me. The Cyclones have been more competitive of late, suffering single-digit losses to West Virginia, Oklahoma and TCU over the last three games.

So I’m taking the points, but expecting a comfortable KU victory in the end.

Basketball Friends | Jayhawks Digging In On Defense by KUsports.com

Given how we don't know which team will show up on any given night, I don't think any game is a given.