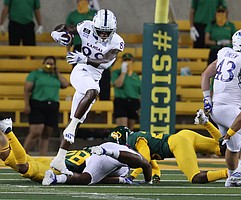 Kansas wide receiver Jamahl Horne (88) jumps over a defender during a kickoff return in the first half of an NCAA college football game, Saturday, Sept. 25, 2020, in Waco, Texas. (Rod Aydelotte/Waco Tribune Herald, via AP) by Rod Aydelotte

Kansas suffered a 47-14 loss to Baylor in the Big 12 opener this past weekend, which wasn’t too surprising given the recent results between these two teams.

What was interesting was looking at statistics from that game, using NCAA Premium Stats on Pro Football Focus. PFF’s grading system gives us an easy way to quantify how each player did for a particular game. Their process essentially gives a positive, negative or neutral grade for every player on every snap, which leads to an overall grade at the end of the game.

With this being the first year those stats are available to the public, I’ll do my best to share a handful of noteworthy numbers every week. The first version of this weekly feature revealed that Thomas MacVittie was better than Miles Kendrick.

Neither of those two signal callers played against Baylor, but we will still take a closer look at how KU’s quarterback performed this past weekend to kick this thing off.

True freshman Jalon Daniels got the start against Baylor, despite not really being in the mix in the opener. Daniels played 76 total snaps in the loss, earning an overall offensive grade of 54.6 by PFF. His passing grade was 61.2, while his rushing grade came in at 47.2.

What does all that mean exactly? Well, it is probably safe to assume that MacVittie would have been the signal caller against Baylor if he was healthy. But there were still flashes of potential by Daniels, and it would be understandable if the Jayhawks just wanted to roll with the kid all year.

Daniels went 0-for-3 on passes that were 20 yards or more downfield after both MacVittie and Kendrick combined for three such deep shots against CCU. Daniels showed off his arm strength on those plays, particularly on an overthrow in the first quarter.

A look at PFF’s passing chart for Daniels further illustrates what he adds to the team. Daniels has the arm strength to test defenses deep as well as outside of the numbers. It was certainly a different looking chart than what MacVittie or Kendrick had in Week 1.

The Jayhawks had a historically bad pass-blocking performance against Coastal, posting its worst grade (19.3) in the PFF era which dates back to the 2014 season. So, in reality, KU’s offensive line only had one direction to go in that department.

KU still took a big leap in that area, recording a pass blocking grade of 58.8 against Baylor.

The right side of the line, in particular, was better this past weekend. Right guard Chris Hughes led the o-line for the second game in a row with a pass blocking grade of 84.9. Earl Bostick Jr., who had a 30.8 grade in pass pro against CCU, had a mark of 78.1 in that category in his second start at right tackle.

Malik Clark still struggled at left tackle, however, posting the lowest mark among linemen with a 50.7 pass blocking grade. Left guard Jacobi Lott finished with a 53.1 for the game in pass protection.

KU gave up 10 total hurries against Baylor, which included five that were charged to Clark.

The Jayhawks performed well in coverage

Other than tackling, KU’s highest mark against Baylor came in coverage. The Jayhawks received a coverage grade of 69.5 by PFF. It marked the highest coverage grade by KU since posting a 71.1 against West Virginia in Week 4 of last year.

Duece Mayberry led the way for KU’s secondary with a mark of 73.4 in coverage on 44 snaps, though plenty of his teammates had a strong showing as well. Cornerbacks Elijah Jones (72.4 coverage grade), Kyle Mayberry (66.2) and Karon Prunty (64) all played at least 61 snap and performed well.

The Jayhawks had four pass breakups as a team in the road loss to the Bears.

Kansas linebackers had a day to forget

Gavin Potter had the highest grade among defensive players with an overall grade of 83.9 on 41 total snaps. The rest of the linebackers finished at the bottom for KU’s defense, however.

Steven Parker posted the lowest mark on the team with a 30.1 defensive grade in 35 snaps, while Kyron Johnson finished with a defensive grade of 42.2 in 47 snaps. Denzel Feaster played 44 snaps and ended up with an overall grade of 45.0 on the day.

Missed tackles probably had the biggest impact on these low marks. The trio of linebackers combined for four of KU’s six missed tackles.

As mentioned in my initial takeaways, Prunty was targeted early and often in his Big 12 debut.

That was to be expected for a true freshman cornerback, of course. Prunty was targeted on six of Charlie Brewer’s 23 pass attempts, while the next highest KU defender was thrown at just three times.

Prunty gave up a reception on three of those six targets, but only allowed a total of 25 yards. R.J. Sneed caught two of his four targets against Prunty for a total of 19 yards. Jared Atkinson had a 6-yard reception on one of his two targets when Prunty was defending him. The two receivers recorded a total of two yards after the catch on those three plays.

Opposing teams will continue to test the rookie corner, but Prunty rose to the challenge for one week.

Since Daniels received lower grades than MacVittie and Kendrick, is the degree of difficulty factored in since the Baylor D is better than the Coastal D.

The highest passing grade in college football so far this season is Trevor Lawrence with a 95.7, for context.

PFF essentially grades each play as positive, negative or neutral. Most plays tend to get a neutral grade, but negatives and positives obviously impact the overall grade. Daniels obviously had some freshman mistakes, and missing throws end up being negative. I don't believe opponent is factored in, but I wouldn't read too much into MacVittie and Kendrick both having better grades. Had either of them played more snaps, I think you would have seen them have more negative plays. MacVittie might still have been better, but I highly doubt Kendrick would have performed better in terms of PFF grades.

Context is always key. Just thought the info was worth sharing. Great question!

Higher than Costello at Mississippi State who threw for over 600 yards and 5 TD's?

Exactly my questions, too, especially how the opposing defense figures into the grades, if at all. If it doesn't, it should.

The opposing D figures into the evaluation at least indirectly. If you are playing against an excellent pass rush or coverage, the time to throw or window for completion is reduced making it harder to record a positive play and easier to have a negative.