Getting to know: Iowa State football 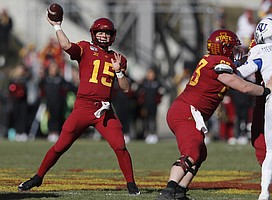 Iowa State quarterback Brock Purdy drops back to pass during the first half of an NCAA college football game against Kansas, Saturday, Nov. 23, 2019, in Ames, Iowa. (AP Photo/Matthew Putney) by Associated Press

Things don’t get any easier for a Kansas football team still searching for its first win of the 2020 campaign.

The Jayhawks (0-5, 0-4 Big 12) might be back home after back-to-back road contests, sure, but that’s probably the extent of reasons for optimism. Iowa State (3-2, 3-1 Big 12) is favored by more than four touchdowns, which is the largest spread of the season for KU.

Iowa State has won five consecutive games against Kansas, which matches the third-longest streak over a league opponent in team history.

The Cyclones, who currently are third in the Big 12 standings, boast the second-best rushing offense in the Big 12 behind Wichita native Breece Hall. The NCAA’s leading rusher is averaging 143.2 rushing yards per game and has helped ISU reach 200 rushing yards in a game three different times so far this season.

In addition, Brock Purdy is the winningest QB in ISU history against league competition. He is now 14-6 vs. conference teams with at least one victory over every member. The Cyclones are also only giving up 21.2 points per game on the defensive end.

Kickoff is set for 11 a.m. Saturday at David Booth Kansas Memorial Stadium. The game will be broadcasted on FS1, with Eric Collins (Play-by-Play) and Ben Leber (Analyst) on the call.

Quarterback — Brock Purdy needs no introduction, as he has set 22 school records during his time at Iowa State. Purdy is fourth among active quarterbacks in passing yards per game, with an average of 260.9 yards per contest. Last time out, Purdy was 19-of-34 for 162 yards to go along with one touchdown and one interception in a loss to Oklahoma State.

During his junior season, Purdy has thrown for 1,074 yards on 159 attempts, completing five touchdowns through the air.

Running backs — Sophomore Breece Hall took over as ISU’s primary running back midway through the 2019 season, and he’s been effective ever since. Over the last 13 games, Hall is averaging 117.6 rushing yards per game with 19 total touchdowns. Hall has nine 100-yard rushing efforts in his last 13 games.

Receivers — So far this season, Xavier Hutchinson leads the team with 28 catches for 297 yards and two scores. The transfer from Blinn JC chose ISU over Oklahoma and Nebraska after tallying 47 receptions for 652 yards and five touchdowns as a sophomore. Junior tight end Charlie Kolar and senior tight end Chase Allen each have 17 catches and 11 receptions, respectively.

Hall, who has 10 catches out of the backfield, is the only other Cyclone with double-digit receptions.

Offensive line — From left to right: Senior Sean Foster, sophomore Trevor Downing, junior Colin Newell, junior Robert Hudson and sophomore Joey Ramos are listed as starters along the o-line for Iowa State. According to PFF’s NCAA Premium Stats, ISU has a pass-blocking grade of 65.4 and that mark ranks fourth in the Big 12. Cyclones are fifth in run blocking with a grade of 64.9.

Bailey is back for his fifth season after suffering a season-ending injury in the fourth game of 2019. His career 22.0 sacks is the best in school history and second among active FBS players.

Linebackers — A few upperclassmen make up the starting linebacker unit for Iowa State. Junior O’Rien Vance is holding things down as the middle linebacker. Junior Mike Rose handles the strong side, while senior Jake Hummell is listed as the starting WLB. With the play of the linebacker unit, Iowa State has held opponents to just 123.0 rushing yards per game to rank 31st nationally and third in the Big 12.

Secondary — It is a veteran group on the back end, led by seniors Lawrence White IV (FS) and Greg Eisworth II (SS) at the safety position. Anthony Johnson Jr., who is a junior, is one of the team’s starting cornerbacks as well. Iowa State has most notably improved on third down, thanks in large part to its pass defense. ISU ranks in the top-40 nationally on third downs, giving up a conversion rate of 35% to opponents.

SPECIAL TEAMS — Senior Connor Assalley is the team’s starting kicker, and he is 5-of-8 on field goal attempts this year. For his career, Assalley is 36-of-50 on field goals and has made all but five of his point-after-attempts. Senior punter Joe Rivery is second in the Big 12 in punting average at 44.0 yards per punt, which also ranks 22nd nationally.

VEGAS SAYS… Iowa State is considered a 28.5-point favorite by most sportsbooks, which would be the largest spread of the season for KU. Despite the big spreads, I haven’t backed the Jayhawks during Big 12 play and that only cost me once.

Still, four touchdowns and the hook seems like a lot to me. Give me the points, KU’s defense can help Les Miles and company at least cover the big number.

4 TD's is a lot but KU is losing by an average of 30 points a game. Until they can show me otherwise I don't think they can cover the spread. Hope I'm wrong.