Getting to know: West Virginia football 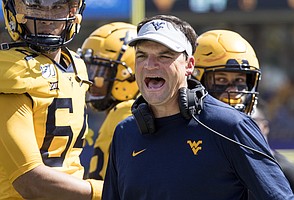 Playing without its head coach on the sideline, the Kansas football team will travel to Morgantown to take on West Virginia.

Les Miles, who is in his second year directing the program, will not make the trip as a precautionary move after testing positive for COVID-19. So if the Jayhawks (0-3, 0-2 Big 12) are going to get in the win column for the first time in 2020, they will have to do so without the captain of their ship.

West Virginia is off to a strong start in Neal Brown’s second year at the helm. The Mountaineers are 2-1 through their first three games, which includes a 1-1 clip in Big 12 action. WVU is coming off a 27-21 win over Baylor just two weeks ago. For comparison, KU suffered a 47-14 loss to BU in the league opener.

On the other side of the ball, quarterback Jarret Doege is also having a strong showing in his second year with the program. It all has led to West Virginia being considered a 22.5-point favorite on FanDuel’s Sportsbook.

To determine if Kansas can cover for the first time in 2020, let’s take a closer look at West Virginia ahead of this weekend. Kickoff is slated for 11 a.m and it will be televised on FOX with Gus Johnson and Joel Klatt on the call.

Quarterback — The transfer from Bowling Green could be on his way to a breakout season for WVU. Doege has completed 69-of-104 attempts through the air for 724 passing yards and five scores. He has thrown for at least 211 yards in each of his previous two outings. Doege is having more success when targeting the middle of the field, so it will be up to KU’s defense to figure out a game plan to take that away.

Running backs — Junior running back Leddie Brown already has 320 rushing yards through the first three games of the season. He’s getting a decent workload, too. Over the last two games, Brown has tallied 53 carries (26 at Oklahoma State, 27 against Baylor) and is the first WVU player to finish with 26 or more carries in back-to-back games since 2006.

Receivers — Four receivers tallied at least four receptions against Baylor, marking the fifth time in the last six games that three or more WVU players have hauled in four or more catches in the same game. Sam James leads the team with 17 catches for 160 yards, while Winston Wright has 15 receptions for 180 yards.

Defensive line — West Virginia is holding its opponents to 268 yards of offense per game this season, ranking No. 1 in the Big 12 and No. 8 nationally. Senior defensive lineman Darius Stills is coming off a 2.5-sack performance against Baylor. WVU has only allowed seven quarterbacks to reach 300 yards passing in a game since 2017.

Linebackers — It was another strong outing for senior linebacker Tony Fields, who finished with 10 tackles (five solo stops) against Baylor. It marked his second 10-plus tackle performance of the season. But these linebackers as a unit have helped stop opposing run games this season. According to PFF, West Virginia has the top run defense in the league with a grade of 85.6 on the year.

Secondary — The Mountaineers are just as good on the back end, posting a coverage grade of 87.1 on the year to lead the Big 12 in that category as well. Cornerback Dreshun Miller, in particular, has been targeted just eight times on his 89 coverage snaps. He’s allowed four receptions for 29 yards. West Virginia’s secondary has averaged 1.14 interceptions per game over the last six seasons.

SPECIAL TEAMS — Kicker Evan Staley is back to lead the special teams department after going 11-for-17 in field goals last year, including a long of 44 yards. Transfer punter Tyler Sumpter joined WVU this past offseason from Troy, where he played for WVU coach Neal Brown from 2016-18.

VEGAS SAYS… West Virginia is a 22.5-point favorite, and somehow that still might not be enough based on what Kansas has shown the last two Big 12 games. Until I see KU cover a large spread, or show any signs of being competitive in this league, it is going to be tough to pick Kansas to cover any number. Give me the Mountaineers in this one.

If I'm a betting man I'm picking West Virginia to cover the spread. We’re 73rd in the country on scoring offense and 74th on scoring defense. And that’s out of a total of 76 teams.