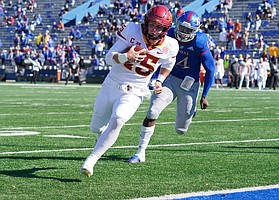 In a weird way, that might have been the most-interesting 30-point defeat in recent memory for the Kansas football team.

Part of that is because it wasn’t really as lopsided as the final score would indicate. Iowa State earned a 52-22 win over Kansas on Saturday afternoon, but the Jayhawks were down 16 points with the ball with about six minutes left in the game.

KU also had many young players stepping up on both sides of the ball, which showed some serious potential for a rebuilding team. The Jayhawks remain winless in Year 2 of the Les Miles era, but their latest loss to the Cyclones offered some signs of progress.

Iowa State improved to 4-2 overall, including 4-1 in Big 12 action, after Saturday's win. The Jayhawks are now 0-6 overall, while going 0-5 against league foes. Kansas has lost every game by at least 15 points this season.

With that, let’s dive into three things we learned from KU’s latest defeat:

Kenny Logan Jr. just has a knack for making plays

Without question, sophomore safety Kenny Logan Jr. was the player of the game for the Jayhawks. He scored on a 100-yard kickoff return and intercepted a pass, becoming the first FBS player to do both of those things in the same game in over two years.

But neither of those two moments proved why Logan has a knack for making plays. For me, Logan’s most-impressive sequence was on a stop he made on a short run by Iowa State midway through the second quarter.

Leading 13-7, Iowa State elected to try a run to the left on 1st-and-10 from inside KU’s 30-yard line. Logan, who was lined up on the weak side, was basically further away than all but one KU player at the time of the snap.

In fact, here is a screenshot to show where Logan is at when the ball is handed off to sophomore running back Breece Hall. 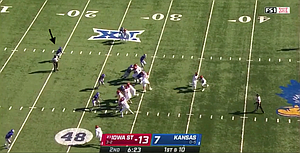 This is where Kenny Logan is when the ball is handed off on a play that ended with Logan tackling Hall for a short gain. by Shane Jackson

Hall, a Wichita Northwest product, proceeded to run around the left edge. Just as Hall was bursting his way upfield through the hole, he was met by Logan in a one-on-one situation. Logan caught Hall on his spin attempt and tossed him to the ground for a tackle.

It was one of Logan’s four stops on the day, but I thought it best illustrated his prolific speed and decisive intent. When Logan decides to do something, it is hard to find many players on the football field moving faster than him.

The play was not that different from a tackle Logan made against Coastal Carolina. Logan sprinted upfield on a run to the left, while avoiding a key block from a receiver in the process, to make the tackle and stop the Chanticleers on third down.

Kenny Logan stop on 3rd down vs. Coastal Carolina by Shane Jackson

I wasn’t doing this particular blog at the time, but I still saved that clip because it was a moment that stood out to me for a lot of the same reasons that Logan’s tackle against Hall did this week. Logan is fast, and he certainly has the athletic tools to make plays at the Big 12 level.

But Logan appears to be doing a better job of processing plays, particularly within his run keys, as of late. And that could be a big deal for a promising young Jayhawk.

Jalon Daniels is not helping his offensive line

Look, I know the story of the season has been about how much the Kansas offensive line has struggled. The Jayhawks had their two worst passing-blocking grades in the PFF era (2013-20) in the first two games of the season, according to NCAA Premium Stats.

However, true freshman quarterback Jalon Daniels doesn’t do the o-line any favors.

I think Daniels is taking off a bit too much — or at least abandoning clean pockets when it isn’t completely necessary. Of course, Daniels has been effective as a scrambler over the last two games. He picked up 37 yards (and two first downs) on four scrambles against ISU.

Against Kansas State, Daniels scrambled on 10 of his 13 rushing attempts for 37 yards.

Yet what I’m talking about is when Daniels is leaving a clean pocket because he thinks he feels pressure. This can lead to him being charged with his own sack or forcing him to come off his initial read on a pass play.

An example of this occurred late in the first half on 3rd-and-15, when Iowa State rushed just three players. Of those three players, one was on the ground and one didn’t even come upfield. Daniels still felt like he had to roll out to his right to extend the play, leading to a low-percentage pass near the sideline while throwing on the run.

This is just one play, of course, but it highlights a tendency that I’ve noticed on tape. Daniels can scramble effectively, and he’s done a decent job at extending plays so far. KU’s o-line has also struggled, which probably could cause any quarterback to have some happy feet.

All things considered, though, KU’s offense line wasn’t that bad on Saturday against Iowa State. The Jayhawks were down two starters, and dealt with multiple in-game injuries during their loss to the Cyclones.

They weren’t perfect, obviously. Freshman Garrett Jones had a couple low snaps when he first came in at center in the second half, but otherwise I thought that he had a solid day. Right tackle Earl Bostick Jr. overcame a rough start, and Iowa State eventually quit testing him on the edge and chose to create more pressure on the left side.

Iowa State brings pressure on LS on 3rd down vs. Kansas by Shane Jackson

Kansas posted a pass-blocking grade of 57.8 against ISU, according to PFF, which was its second-highest mark on the season. After posting grades below 20 in each of the first two outings, KU has been 50.6 or better in three of its last four games. That is not great by any means, but it’s not historically terrible like it was early in the season either.

In fact, PFF actually charged Daniels with three of his five sacks this past Saturday. This could be due to holding the ball a bit too long or running into pressure after leaving early.

Whatever the reason, Daniels should at least shoulder some more of the blame when discussing how KU performs in pass protection.

This time last week, it was Parker getting much of the praise for his play in the Kansas State game. Parker, a redshirt freshman, delivered arguably the best game of his career against K-State and it led to Benton Smith writing this great story on Parker.

Then, Parker received a harsh reminder of just how difficult it is to be consistently productive at this level.

Per PFF, Parker posted the worst defensive grade (39.1) on the team against Iowa State. He received a mark of 27.9 in run defense on 22 such snaps. For comparison, Parker’s defensive grade of 69.2 against KSU was the best mark of his career.

Stats aside, the tape revealed some troubling moments for the top-rated prospect in Les Miles’ first Kansas football recruiting class.

Parker didn’t set the edge in a crucial goal-line situation, which led to Iowa State quarterback Brock Purdy coasting around the right side for the easy score in the first quarter. To make matters worse, Parker actually jumped offside with a subtle flinch before the snap.

Hall scored on a long touchdown run in what effectively iced the game with 5:15 remaining in the fourth quarter. It was the final score when Iowa State had its key starters in, and Hall made a couple defenders miss in space.

But Parker’s missed tackle in the gap was what set the whole sequence up.

It was a day to forget for Parker, who only finished with three tackles. He’s young, and still talented, so there are going to be some growing pains. Still, I think it helps keep things in perspective for the rest of us who are analyzing each game.

Players like Logan, and Parker himself last week, are certainly going to have their moments where they flash some serious potential. It is also important to remember that there will be growing pains as they get used to playing at this level.

I only shared a few of the clips from this game that are saved on my laptop, so let’s share this cool play design by Kansas offensive coordinator Brent Dearmon.

On 1st-and-10 in the second quarter, the Jayhawks showed a read option and had all the action going to the right side. Both guards ended up pulling to the right to lead the way for the running back, if he was given the ball

Daniels kept the ball and fired a pass to the other side of the field. The Iowa State defensive back came toward the quarterback, so Daniels hit Kwamie Lassiter II in stride on a slant over the middle.

The Jayhawks ran a similar play a couple times later in the game, but the ball was given to the running back on both occasions. It is not a new play, of course, but it is an example of how coaching staffs are constantly setting things up when running certain plays.

I always enjoy these articles. Thanks for posting them.

If Jalon is leaving the pocket too soon it might be due to paranoia. Who could blame him.