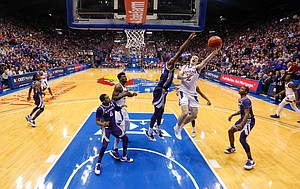 Kansas guard Christian Braun (2) goes to the bucket against Kansas State forward Makol Mawien (14) during the second half, Tuesday, Jan. 21, 2020 at Allen Fieldhouse. by Nick Krug

The first domino has already fallen in the aftermath of the game-ending brawl between No. 3 Kansas and Kansas State, which took place Tuesday night in Allen Fieldhouse.

KU coach Bill Self announced on Wednesday that forward Silvio De Sousa has been suspended from the team indefinitely for his role in the fight. Both programs are still waiting for the final verdict from the Big 12 Conference in regards to the melee that followed KU’s 81-60 win over K-State.

With so much still up in the air, it is hard to accurately predict how this will impact the Jayhawks (15-3, 5-1 Big 12) moving forward. Assuming more players are punished, KU’s chances at reclaiming the Big 12 throne — especially with No. 1 Baylor (16-1, 6-0) playing so well — could be hurt in a big way.

As a result, that might mean Kansas is not a lock for a No. 1 seed in the upcoming NCAA Tournament even though it is currently the top-ranked team on KenPom. On Wednesday, CBS Sports’ Jerry Palm provided insight on how the committee might evaluate KU’s resume, if it were to have multiple key players miss some games.

“The most important thing to remember about how the committee handles suspensions, injuries and other roster issues is that all of the losses count,” Palm said. “They will not pretend a team would have won a game if it had been at full strength, and they will not pretend the game didn't happen. This also applies in reverse to the opponents that kicked them while they were down.”

Palm believes that roster issues tend to only impact seeding decisions and not the selection process. Kansas has made it to 30 consecutive NCAA Tournaments, which is the longest active streak in college basketball.

“That does not apply to Kansas, but a team has to earn selection regardless of roster issues,” Palm said. “For seeding, the committee will put a little more weight on what a team did, good or bad, with the roster it is taking into the tournament than otherwise. It is typically no more than a 1-seed line adjustment though and often times, there is no discernible adjustment at all.”

Last season, KU was the fourth seed in the Midwest region before falling to Auburn in the second round. It marked the first time since 2009 that the Jayhawks weren’t a 1 or 2 seed.

Louisville (East), Dayton (South), Duke (West) and Florida State (Midwest) are all currently listed as No. 2 seeds. KU’s 8-3 record against quadrant one opponents is three more wins than any other No. 1 or No. 2 seed.

Kansas plays host to Tennessee at 4 p.m. Saturday for the Big 12/SEC Challenge.