Getting to know: Texas basketball 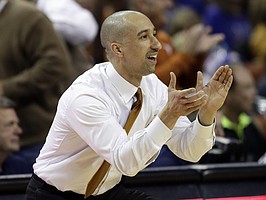 Fresh off a gritty road win, No. 6 Kansas might need a similar blueprint this weekend in Austin, Texas.

With Devon Dotson’s status still uncertain, the Jayhawks could have to replicate what they did in their 66-52 win at Oklahoma without their starting point guard. KU’s next opponent, Texas, figures to be a similar type of test as well.

The Longhorns, who have won two games in a row, are ranked No. 58 overall on KenPom. Oklahoma, for comparison, was listed at No. 52 on the latest team rankings. KenPom gives Kansas a 76% chance of victory, with a projected score of 67-59 in KU’s favor.

The Longhorns are coming off wins over Kansas State and Oklahoma State after falling to Baylor and Oklahoma to begin Big 12 play. Kansas (13-3, 3-1 Big 12), meanwhile, has only lost to BU through its first four conference outings.

Saturday’s contest marks the 43rd meeting between Texas and Kansas. The Jayhawks hold a 33-9 lead in the all-time series. The game will be televised nationally by ESPN, with Rich Hollenberg and Fran Fraschilla calling the action.

Tipoff is slated for 1 p.m.

Leading the team in scoring with an average of 12.1 points per game is the junior guard.

Coleman is in his third year as the starting point guard. Coleman has played and started all 87 games in his three seasons at UT. He has reached double figures in scoring 44 times and topped the 20-point mark seven times.

“I grew up with a basketball in my hand. I think that has helped me along the way.” - Matt Coleman III, @TexasMBB#HookEm #ChampionsForLife pic.twitter.com/OjWHMKpG4y

by Champions For Life

Ramey has emerged as a valuable weapon for the Longhorns.

It should be an intriguing battle between KU’s frontcourt and Sims this weekend.

So far this season, Sims leads the team in rebounding (8.3 rpg) and blocked shots (21) and ranks tied for third in steals (9) and fifth in scoring (9.1 ppg) while converting 67.4% (62-92) from the floor. All four of his double-doubles in his career have come this season.

This is the third year for Sims in the UT frontcourt, and he has played in 85 games (43 starts) in his career. He has reached double figures in scoring 17 times and in rebounds on eight different occasions. Sims is coming off a three-block performance in a win over Oklahoma State.

ONE THING TEXAS IS GOOD AT

Texas has done a good job at limiting easy baskets this season. Opposing teams are shooting just 43.3% on 2-point shots against UT, which is the 27th-best defensive clip in the country on KenPom.

ONE THING TEXAS IS BAD AT

The Longhorns won’t get a lot of production from the charity stripe. Texas is shooting just 64.3% from the free throw line, a number that ranks 320th in all of college basketball.

It is hard to commit to a prediction with Dotson’s status uncertain, especially with this current spread. Kansas is a 7.5-point favorite on FanDuel’s Sportsbook. I know KU just pulled off a gritty double-digit win in a similar test a few days ago, but I think things will be a bit tougher this time around. I’m taking the points, though Kansas ultimately wins a close one.