Getting to know: Oklahoma basketball 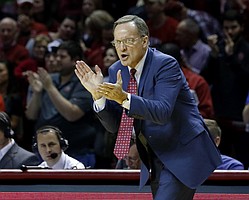 While KU’s first Big 12 loss showed some of the team’s flaws, this year’s squad is still one of the better teams in college basketball.

After a tough opening three-game slate, the Jayhawks will have an opportunity to figure some things out during a favorable stretch to close out January. No. 6 Kansas (12-3, 2-1 Big 12) is slated to face just one top-50 opponent, per KenPom, over the remaining six games in January.

That opponent, of course, is KU’s next foe. Oklahoma, a team ranked No. 48 overall on KenPom, will welcome Kansas in league tilt tonight at Lloyd Noble Center. The Sooners (11-4, 2-1 Big 12) are coming off an 81-68 road loss to Iowa State.

KenPom gives the Jayhawks a 73% chance of winning, which is actually their lowest chance of victory out the remaining games in January. Kansas, which suffered a 67-55 home loss to Baylor last time out, has posted a 44-5 clip coming off a defeat over the last six seasons.

Kansas leads the overall series with Oklahoma, 148-68, including a 52-44 in games played in Norman. The series is tied at 19-19 in meetings in Lloyd Noble Center.

Tipoff is slated for 8 p.m.

As the only senior on the Sooners roster, Doolittle is a key part of Oklahoma’s attack.

Doolittle is the third-leading scorer in the Big 12, averaging 17.1 points per game to go along with an average of 8.7 rebounds and 1.7 assists per outing. He is the only major-conference player averaging at least 17.0 points, 9.0 rebounds and 1.8 assists.

Dating back to last season, Doolittle has registered eight double-doubles in his last 22 games, which includes a stat line of 24 points and 11 rebounds against Kansas on March 5. Doolittle is one of only two Big 12 players to earn Big 12 Player of the Week on multiple occasions this season.

Doo knocks down the go-ahead trey with 13.5 seconds to play.

He's up to 2️⃣8️⃣ points. pic.twitter.com/DdR0jR0blu

It is not hard to see that the Sooners need Manek to have success on a nightly basis.

During his career, Oklahoma is 36-16 when Manek scores in double figures and 22-6 when he scores at least 15 points. The Sooners are also 10-4 when he hits four or more 3-pointers. Dating back to last season, Manek has scored in double figures in 26 of his last 31 games, including 13 of 15 games this season.

With 741 career points coming into this season, Manek is just the 10th player in OU history to reach 700 career points by the end of a sophomore campaign. Only Blake Griffin, Trae Young, Willie Warren and Buddy Hield scored more points as underclassmen.

Reaves has been one of the Sooners’ leading offensive forces during his first season with the team.

Reaves, who is a transfer from Wichita State, sat out the 2018-19 season but has quickly made up for lost time. Through 15 games, he is averaging 15.9 points along with 5.5 rebounds and 2.4 assists per contest. His 15.9 points per game ranks sixth in the Big 12 and leads the conference’s newcomers.

In addition, Reaves has reached 20 points on four occasions this season, which is the third-most outings in the Big 12.

Austin Reaves was not going to lose his first Big 12 game.

He scored 1️⃣8️⃣ points in the final 10 1/2 minutes of the game to lead the #Sooners to a comeback win. pic.twitter.com/hySOZNRRVs

ONE THING OKLAHOMA IS GOOD AT

OU does a good job of taking care of the rock, which should be important tonight. Oklahoma’s turnover rate of 15% is the sixth-best clip in the nation, per KenPom.

ONE THING OKLAHOMA IS BAD AT

I wanted to update this, because it is important to adjust when you get more info. Since Matt Tait reported that sophomore point guard Devon Dotson won't play tonight against Oklahoma, the line has moved in a hurry. Kansas is now just a 4-point favorite after opening as a 6.5-point favorite on FanDuel's Sportsbook.

Honestly, I'm impressed at how tough this line is now. As Saturday showed, Kansas is limited on what it can do offensively when Dotson is out of the game. But this defense can still play well enough to win this game. I'm taking the points on the new line, but I think the Jayhawks squeak this one out.