Getting to know: Kansas State basketball 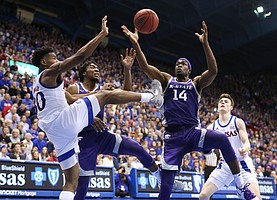 It is no secret that this will be an interesting atmosphere for No. 1 Kansas this weekend.

For the first time since the brawl between Kansas and Kansas State, which took place on Jan. 21, the two teams will square off at Bramlage Coliseum. The Jayhawks won the first meeting going away, by a score of 81-60, but the incident that took place at the end of the game ended up being the biggest storyline.

Now, it is time for the rematch. Oh, and the two teams happen to enter the matchup on completely different streaks. Kansas State (9-19, 2-13 Big 12) hasn’t won a game this month, riding an eight-game losing skid ahead of the latest installment of the Sunflower Showdown.

Kansas, meanwhile, has won 13 games in a row entering this weekend. The Jayhawks, who are tied with Baylor in first place of the Big 12 standings, are now 25-3 on the year (14-1 Big 12) with three games left to play in the regular season.

According to KenPom, KU has an 88% chance of victory against Kansas State. The system gives KU a projected 71-58 win. 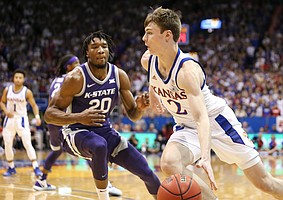 Sneed has been leading the way for the Wildcats during his senior campaign.

This season, Sneed is averaging 14.0 points per game on 37.1% shooting from the floor. Sneed has scored in double figures in a team-best 21 contests, which includes four 20-point performances. Sneed has paced Kansas State in scoring in 12 different outings.

In addition to leading the team in scoring, Sneed paces KSU in field goal attempts, 3-point field goals made and successful free throws. He is also tops in defensive rebounds with 108 boards on the year. 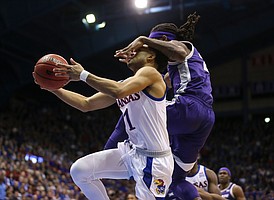 The only other K-State starter averaging in double figures is Diarra.

Diarra is averaging 13.1 points per game on 41.2% shooting with a team-best 4.4 assists per contest. Diarra is also averaging 4.0 rebounds and 1.9 steals per contest in 31.0 minutes per outing. Diarra has led K-State in scoring on 11 different occasions.

Over the last 24 games, Diarra has reached double figures in 17 different contests. According to KenPom, Diarra ranks 36th in the country with an assist rate of 34% on the season.

Kansas guard Christian Braun (2) goes to the bucket against Kansas State forward Makol Mawien (14) during the second half, Tuesday, Jan. 21, 2020 at Allen Fieldhouse. by Nick Krug

The battle in the post could go a long way into determining how close this contest will be.

Mawien, a 6-foot-9, 228-pound senior, will have his hands full with KU center Udoka Azubuike on Saturday. This season, Mawien is averaging 7.5 points and 5.5 rebounds per game in 21.4 minutes per contest.

With his next start, Mawien will become the fifth Wildcat (Steve Henson, Barry Brown, Jr., Rolando Blackman and Rodney McGruder) to start in 100 consecutive games.

Kansas State is coached by Bruce Weber, who is 159-108 in his eighth season at KSU.

ONE THING KSU IS GOOD AT

Kansas State isn’t good at a lot of things during what has been a bad season, but it can still force turnovers. The Wildcats have posted a 24% turnover rate, which ranks eighth in all of college basketball.

ONE THING KSU IS BAD AT

Azubuike should have another strong defensive showing in this game. Opposing teams have posted a block rate of 12.1% against K-State this year, a number that ranks 342nd in the country.

Kansas is favored by 11.5 points, which seem surprisingly low given what the computers say. KenPom projects KU to win by 13, while Torvik has Kansas winning by 12. The Jayhawks have also covered the spread in six consecutive games, for the record.

The spread is probably lower than both because of what should be an intense atmosphere. But Kansas State isn't playing well right now, and Kansas very much is. KU has also proven its defense is good enough to bury teams on the road, and that should be the case in this one.