Spread for KU's Week 2 matchup with Coastal Carolina moving down 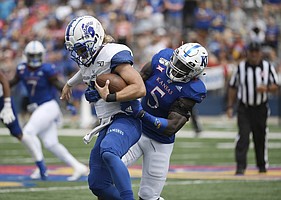 It was a successful week for the Big 12 conference to start the 2019 football season.

All 10 teams won in the season opener, even though a few squads had to play well late to survive. It marked the first time since 2012 that the Big 12 has gone undefeated in the first full weekend of opening games.

A win is a win, especially in Week 1 of college football. But all of these programs have already turned their attention to the second week. Based on the opening betting lines by FanDuel, a pair of teams are likely to lose in the second game of the season.

As of late Monday afternoon, seven of the eight Big 12 betting lines were available on FanDuel’s sportsbook. With that, let’s take a look at those seven respective lines:

The line for this one is trending down, and that makes sense to me.

Sophomore running back Pooka Williams Jr. is back, and that obviously played a part in the lofty opening line. On some betting sites, KU was considered a 10-point favorite over Coastal Carolina as of Sunday afternoon. It has since moved to 8.5 points as of late Monday afternoon, however.

Coastal Carolina is coming off a 30-23 loss to Eastern Michigan in the first week, but Kansas needed a late drive to rally past Indiana State. There were positive in KU’s win, but the offense looked stagnant at times.

Perhaps Pooka fixes all of that. It is not hard to believe that, considering what he accomplished last year. I want to watch Coastal Carolina’s season opener before committing to a bet here.

It is worth noting, though, that Bill Connelly’s SP+ has a projected margin of six points for this game. He gives KU a 64% win probability, which is lower than the 72% win probability for Kansas against Indiana State.

This line line seems pretty spot on. Kansas State ran over Nicholls, 49-14, in the first game of the Chris Klieman era. The Wildcats ran the ball 58 times (!) last weekend, accumulating 361 yards and five scores in the win.

The Mountaineers needed 10 points in the fourth quarter to pull out a 20-13 win over James Madison in the first game under head coach Neal Brown. Missouri, meanwhile, suffered a 37-31 loss to Wyoming.

SP+ projects WVU to lose by 11.4 points, and the visitors have just a 26% win probability.

It should be another easy contest for Baylor, which rolled to a 56-17 win over Stephen F. Austin on Saturday. In fact, the Bears are projected to win all three nonconference games by at least 25 points via SP+, including a 32.3 projected margin of victory against UTSA.

Baylor has at least a 93% win probability in all three of its games before Big 12 play, so it will be tough to get a good read on this team before it squares off with Iowa State on Sept. 28.

If you read last week’s pick-six blog, I recommended to fade Texas. Yikes. That did not work out. Texas crushed Louisiana Tech by a 45-15 margin. Am I going to double up this possibly bad take? You bet.

I just think the Longhorns are overrated for many of the reasons I mentioned in the previous blog. I’m willing to sacrifice the points here. For context, LSU is projected to win by 14.4 points per SP+.

In his first game, Matt Wells led Texas Tech to a 45-10 victory over Montana State. It marked the largest margin of victory by a Red Raider head coach making his debut since DeWitt Weaver led TTU to a 46-7 win over West Texas State in 1951.

The Red Raiders recorded 691 yards of total offense in the victory, which is the most for a head coach making his debut in school history. Week 2 should be more of the same, as SP+ projects a 35.8 margin of victory for Texas Tech.

Redshirt freshman quarterback Spencer Sanders played every snap of Oklahoma State’s 52-36 win over Oregon State. Sanders went 19-for-24 through the air with 203 yards and three scores.

Running back Chuba Hubbard (221 yards and three touchdowns on 26 carries) and receiver Tylan Wallace (92 yards and two scores on five catches) give the Cowboys plenty of firepower as well. I’m jumping on this line before it moves.

Shane, can you explain what SP+ is? Thanks.