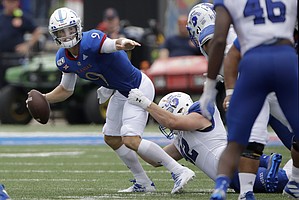 The first eight quarters of the Les Miles era haven’t been impressive from an offensive standpoint.

KU’s passing attack, in particular, has been a problem during the team’s 1-1 start to the year. The Jayhawks are averaging just 174 yards per game through the air, which is higher than only 24 teams in all of FBS after two weeks.

But Stanley and company have had their moments, most notably the game-winning drive against Indiana State. A total of 56.6% of Stanley’s passing yardage on the season came from the final two quarters of the season opener. Both of his passing scores took place in the second half against the Sycamores as well.

Other than that, opposing defenses have loaded the box and stymied KU’s offense. As a result, junior receiver Andrew Parchment has an easy solution for how to prevent teams from focusing too much on the run game.

“Just by taking shots downfield, I feel like that can soften (things) up for the run game,” Parchment said. “I just feel like if we take more shots down the field, then that can make the box a lot easier.”

After charting all 48 of Stanley’s pass attempts through two weeks, it is hard to argue with that assertion. The Jayhawks force teams to respect the pass when they take deep shots, and they have had some success doing so.

For the purpose of this blog, I have labeled deep throws as any ball that travels 20+ yards in the air. It is simply how far the ball travels in terms of charting the pass, but the final statistics will include yards after catch. For example, those touch passes to Parchment go down as a throw behind the line of scrimmage even though it will include his total yards for statistical purposes.

In this blog, I have decided to break all Stanley's throws into four categories in terms of distance traveled. Those four categories are 20+ yards, 10-19 yards, 0-9 yards and behind the line of scrimmage. I have also charted what direction (left, middle or right) of the field Stanley is throwing to on each throw.

Here is a look at his total numbers through two games: 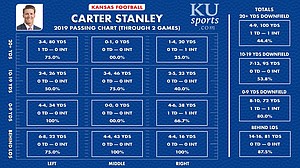 Based on his overall numbers, it was interesting to find that Stanley has had more success going to his left. Just over 46% of his yardage has come from throws to the left side of the field, as he is 15 of 20 for 162 yards and one passing touchdown.

In terms of type of throws, Stanley is averaging 11.11 yards per play on deep throws. Obviously that makes sense given how much yardage one such completion is worth, but Stanley has been effective on the nine occasions he’s been asked to throw deep. Stanley has completed four such passes for 100 yards.

Yet the Jayhawks haven’t asked him to do that much. In fact, six of his nine deep ball attempts came in the second half against Indiana State. So, despite Stanley’s struggles as a passer, there might be some truth to the fact KU should go deep more.

Carter Stanley's deep passes through 2 games in 2019 by KUsports.com

“I feel if we take more shots downfield, I feel like we will have a better chance of winning the football game,” Parchment said. “We just have to have a good mixture of both (run and pass).”

I’d also argue that three of Stanley’s best completions came on deep pass attempts in the second half against ISU. He threw a 32-yard strike to Parchment in the third quarter of that game on first down. Stanley also linked up with senior receiver Daylon Charlot twice on the game-winning drive, including a 22-yard touchdown pass.

Charlot could also be a reason why the Jayhawks didn’t have more deep ball attempts in the second week. After receiving eight targets in the first game, Charlot was not thrown to once against Coastal Carolina. According to Pro Football Focus, provided by Jayhawk Slant, Charlot played just 20 snaps in Week 2.

Parchment, Charlot, Stephon Robinson and tight end James Sosinski have netted 40 of the team’s 48 targets through two games. Here is how they have done on the different passes thus far: 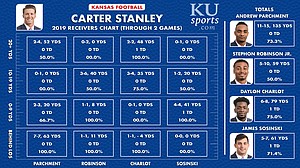 Against Coastal Carolina, Kansas attempted three passes of 20+ yards. The Jayhawks did so on the first play of the game, but Parchment ran the wrong route and it resulted in an incomplete. Seven plays later, KU scored on a 41-yard touchdown run by Khalil Herbert.

And that is the reason to keep taking shots moving forward. It won’t always end up in a big play, but it will keep the defense honest. That should give KU’s talented running back unit more room to work with as well.

It might not solve all of the team’s offensive woes. But it could help Kansas sustain a few more drives without making any major personnel changes.

“Everybody has to just get on the same page and try to duplicate what we did in the opener and opening drive against Coastal Carolina,” Parchment said. “I feel like if we get back to that, we will be a pretty hard team to stop.”

I would add the caveat to allow the quarterback to pass on first or second down as well. Not sure if this is backed by any stats but we sure seemed to be stuck in a rut of two short run plays before trying to pass.

Good point. Yeah, I didn't keep track of what downs the deep passes took place on. But that Parchment bomb in the Indiana State game was on first down, and then Stanley also tried to hit Parchment on the first play of the game against Coastal Carolina. It certainly makes sense to take a shot on first down when the defense is expecting run.

It's hard to argue that Coastal Carolina wasn't fully expecting and set up well to defend a run play or short pass on every down in the second half.

So, what is the story on Charlot not being used? Is there something we don't know about?

He only played 28 snaps the week before, per PFF. That doesn't necessarily explain his lack of usage in Week 2. But I'd guess that formations used and lower number of pass attempts factored into this more than anything else.

One problem with that idea is that I wonder if the o-line will be able to protect well enough and consistently enough to give Stanley time to try those long throws. The line has been one of the biggest problems so far.

Most deep throws in the video I created are simple 3-step drops for Carter Stanley. He throws to his first read on the final step. Not every deep pass play needs a bunch of time.