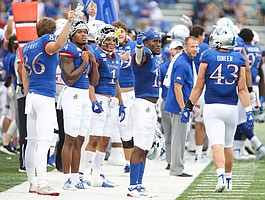 The Kansas bench signal the ball going their way after a recovered onside kick during the third quarter on Saturday, Sept. 21, 2019 at David Booth Kansas Memorial Stadium. Interference was called on the play and the ball was awarded to West Virginia. by Nick Krug

This week was the toughest week to come up with over/under prop bets.

How do you pick five reasonable numbers when Oklahoma is coming to town this weekend?

After all, the Sooners are practically breaking the rules by averaging over 100 yards per game more than any other team in college football. Kansas, meanwhile, has had its fair share of offensive struggles in Big 12 play.

That being said, I believe have come up with five really good over/under prop bets for this week's matchup. Kansas plays host to Oklahoma at 11 a.m. Saturday at David Booth Kansas Memorial Stadium. But you can vote in the Twitter polls well before then.

Through five weeks, Twitter voters are still leading this series challenge. Our sports editor Matt Tait and I are both right in the mix, however. Full standings can be found at the bottom of this blog, which also include Week 5 results.

Make sure to check out our picks by listening to this week's podcast, which should be posted by Friday.

Before that, feel free to vote for the Week 6 over/under prop bets via these polls on Twitter.

Points scored by Kansas in the first half: 8.5 #kufball

Yards per run by Oklahoma’s offense: 7.5

Third down conversions by Kansas: 3.5 #kufball

We are 32 point underdogs which seems generous given how we played last week and how well OU has played all season. I just hope we don't get embarrassed.