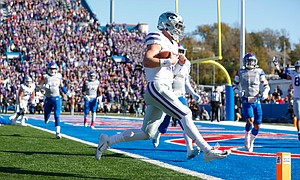 Kansas State quarterback Skylar Thompson (10) runs into the end zone for a touchdown during the first quarter on Saturday, Nov. 2, 2019 at Memorial Stadium. by Nick Krug

Baylor still doesn’t seem to be getting the respect it deserves, and this line seems too low. TCU’s quarterback situation is up in the air after freshman Max Duggan and backup signal caller Mike Collins both got hurt. The Bears might not be winning Big 12 games by a lot, but I’m taking any number that is less than a field goal.

Two touchdowns and the hook is simply too much faith in Michigan State, and the line actually opened at 11.5 points somehow. The Spartans have given up 28 or more points in four consecutive games and are without their leading tackler. Illinois is tied for the FBS lead with five defensive scores.

USC is coming off a 56-24 loss to Oregon, falling to 5-4 on the year. Arizona State, meanwhile, is now 5-3 after dropping back-to-back road games to Utah and UCLA. ASU doesn’t have a great offense, but USC has dealt with a number of injuries on the defensive side of the ball. The Trojans are also averaging 30.4 points and 432.7 yards per game.

Under of the week: Arkansas vs. Western Kentucky (52)

Former Arkansas quarterback Ty Storey is now the starter at Western Kentucky, so perhaps the Razorbacks will have an idea what to do on the defensive side of the ball? The Hilltoppers, meanwhile, are 24th in total defense in the country. Oh, and redshirt freshman John Stephen Jones, who is the grandson of Dallas Cowboys owner Jerry Jones, is expected to start at quarterback for Arkansas.

The easy move would be to take Louisville, as I’m sure most people will do this week. The Hurricanes are coming off a win over Florida State in Tallahassee, while the Cardinals are fresh off a bye week. More of the money appears to be on Louisville, but trusting Miami’s defense seems like the play here.

Once again, I’m recommending to bet against my favorite team. Last week’s win over New England was a lot of fun, but this is such an easy bet. The Bengals are coming off a bye week and have a new quarterback under center. Cincinnati has also played multiple teams close, and even covered an 11-point spread in Baltimore just a few weeks ago.

All of these lines are presented by FanDuel’s Sportsbook. Sign up today on FanDuel using this special promotion.