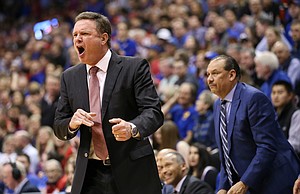 Kansas head coach Bill Self gets heated after a call agains the Jayhawks during the second half, Wednesday, Jan. 9, 2019 at Allen Fieldhouse. by Nick Krug

In a matter of months, Devon Dotson has displayed a ton of growth during his freshman campaign with No. 7 Kansas.

But as special as he’s been this season, especially from a consistency standpoint, Dotson proved he still has room to grow during a 77-68 win over TCU Wednesday night in Allen Fieldhouse.

In the win, Dotson went 0-for-6 from the floor, finishing with five points and three assists in 27 minutes.

Think back to the most previous three-point play, in which I highlighted a 5-on-1 fast break that the Jayhawks (13-2, 2-1 Big 12) failed to convert on during a 77-60 loss at Iowa State. On that play, I highlighted that Dotson did not make an ISU defender commit before passing the ball. So while multiple players were responsible for the blunder, Dotson made the first mistake on that particular sequence.

Dotson displayed similar struggles in transition, which will be the first thing I mention in today’s three-point play. As a reminder, I plan to highlight three takeaways the day after each KU game. If you ever have a suggestion, feel free to reach out on Twitter.

Following a basket by Dedric Lawson, KU took a seven-point lead with less than 17 minutes remaining.

Freshman Ochai Agbaji immediately gifted the Jayhawks another possession by getting in the passing lane to record a steal. He swiftly moved up the court before giving the ball to Dotson, who then tried to make something happen.

The sequence led to a turnover, as Dotson made the wrong pass and it was evident that Kansas coach Bill Self was not pleased with his freshman point guard.

“He made a bonehead play when he tried to go one against two in transition with nothing there,” Self said after the game. “I got on him then.”

Part of Self’s message was that Dotson has to learn to make the safe play sometimes, which he actually did moments later.

Leading by three points, Kansas sophomore Marcus Garrett managed to net a steal near half court around the 11-minute mark. Garrett tossed the ball over to Dotson, who then pushed the ball in transition.

Dotson had another numbers advantage, though this time it was just 3-on-1. Dotson elected to dump the ball off to K.J. Lawson on the left side, rather than lob it up to Agbaji on the right side.

“Right after that, he’s got Ochai wide open for an uncontested lob and he makes the safe play to K.J.,” Self said. “I go, ‘What are you doing?’ He’s like, ‘You told me to be safe.’”

After the game, though, Self credited Dotson with making a “couple winning plays” by pulling the ball out in transition when he didn’t need to attack and having active hands on the defensive end.

Still, those two specific plays illustrated that Dotson has plenty left to improve on. And that he's capable of doing so on the fly in a game.

There were many questions about what life would be like without Udoka Azubuike, who is sidelined for the remainder of the season.

When Self spoke to reporters Monday afternoon, he didn’t quite have all the answers. In some ways, he was going through the different ideas out loud during his media availability.

“If you stop think about it, can we become totally opposite of what we've been? Can we become a charge-taking team?” Self rhetorically asked at his press conference. “Since we don't have shot blockers, can we become a team that's better positionally, that you can't get beat as much because you don't have the guy behind? Could we be a team that maybe soft presses and do some things to create activity?”

Kansas fans got a glimpse of what this team is capable of doing during small stretches on the defensive end without its starting center. After Grimes missed the second free throw with 13:51 left in the first half, the Jayhawks immediately went into a soft full-court press.

The Horned Frogs were thrown off by this different look, and ultimately ended up turning the ball over on a 10-second violation.

The Horned Frogs finished with 20 turnovers, which marked just the second time this season that they finished with more turnovers than assists (12) in a game. And it was a credit to KU being able to throw different looks at TCU, while using athletic guards to create more pressure in passing lanes.

Vick continues to be careless with ball

The entire KU team was forced into abundance of mistakes against Iowa State, as it finished with 24 turnovers in the 17-point loss.

As a team, the Jayhawks turned it over just 12 times against the Horned Frogs Wednesday night. Vick was the main culprit for these miscues, as he ended up with six of the team’s dozen turnovers.

It marked the third consecutive game that Vick has recorded at least four turnovers. To put that in comparison, Vick never had more than three turnovers during nonconference season. Prior to Big 12 play this season, Vick’s highest number of turnovers in a game was five, which he did just once in his career.

During league play, Vick has committed a combined 17 turnovers in 90 minutes. Over that span, Vick has went 12-for-30 from the floor, including 6-of-20 from long range. He’s also recorded a total of six assists over the previous three games for Kansas.

I thought that as a whole, they did well given the circumstancesWe’re so spoiled that we expect guys to automatically play as Devonte or Frank played in their final two years. A great standard but this is still work in progress. .

Dotson did fine. He's going to make some dumb mistakes. Vick can't keep turning the ball over. I made the same point in another comment in another story. As a Sr. he has to be better with the ball. Desperately need to Need to win Saturday. The conference champion will be the team with the most road wins, always is. KU needs to go 5-4 at a minimum on the road and Baylor has not home court advantage.