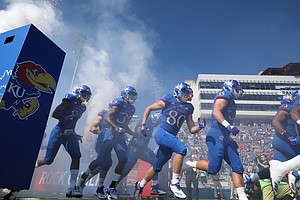 The Kansas Jayhawks take the field for kickoff on Saturday, Sept. 15, 2018 at Memorial Stadium. by Nick Krug

After a long offseason, the college football season is finally here.

Now it is time to empty the bank account, because there is nothing quite like betting on college football. So much crazy stuff happens in nearly every game. While writing this, UCLA quarterback Dorian Thompson-Robinson fumbled twice — without being touched — against Cincinnati to end two promising drives.

This season, I’m putting my money where my mouth is and readers are encouraged to laugh at me when I lose it all. Or you can lose with me, because we are all friends and this is a safe place.

Every Friday morning, I’ll post six gambling/fantasy-related tips for the upcoming weekend in football. In this weekly blog, the KU sports staff will also pick against the spread for six different games based on lines via FanDuel’s sportsbook. We will even keep track of our picks throughout the season.

In the future, NFL games will be included in the mix but this is strictly a college football weekend. With that, let’s dive into my six tips for the first real weekend of football. Win or lose, it is good to be back.

Fading Texas to start the season has become my favorite tradition. The Longhorns might be officially back, but I’m choosing to believe this game will be closer than a three-touchdown difference. Texas averaged 5.5 yards per play on offense, while allowing 5.6 yards per play on defense. Meaning there is a chance that UT was fortunate to go 10-4 last year.

It would also make sense that the Longhorns, who will face LSU next week, might be reluctant to dig deep into the playbook. Most importantly, though, Tom Herman doesn’t do well as a favorite. Herman is 6-11 against the spread as a favorite over the last two seasons at Texas.

LSU, the other party in what should be a riveting Week 2 matchup, might also fall victim to looking ahead during its season opener. At least that is my mindset when making this bet, since I am taking the points against LSU.

Last season, Georgia Southern ran the ball 643 times and threw just 117 passes in its option offense. That is the biggest reason why I’m taking the points. There is a good chance that this game doesn’t have enough total plays for LSU to win by at least four touchdowns.

Fade the noise: Take the under for Ole Miss at Memphis

On the surface, a total score of 67.5 for Ole Miss at Memphis seems like an easy bet. After all, the Rebels averaged 33.9 points per game and the Tigers produced 42.9 points per contest. Neither squad played much defense, as both gave up over 31 points per outing in 2018.

But Memphis might not be as dynamic on offense without Darrell Henderon and Tony Pollard. Ole Miss, meanwhile, has a new quarterback and a new offensive coordinator. With so much uncertainty at the start of a new season, I’m willing to take a chance on the under in this situation.

Oregon State quarterback Jake Luton costs $7,500 on FanDuel, which is cheaper than seven other quarterbacks during Friday’s slate, including both Dru Brown and Spencer Sanders of Oklahoma State. The battle between the Cowboys and the Beavers has an over/under of 72 points, so playing Luton gives me a cheaper option in what should be a high-scoring affair.

Myles Gaskin is gone, and Salvon Ahmed is primed to become Washington’s lead running back. He averaged 6.0 yards per carry in his first two seasons, accumulating 996 yards and 10 scores on 165 attempts. He’s also involved in the passing game, and costs just $8,100 on FanDuel in the season opener against Eastern Washington.

Can the Sooners do it for a third year in a row? That is the question we are all wondering following back-to-back Heisman-winning seasons from Baker Mayfield and Kyler Murray. It is not that crazy to think that the former Alabama quarterback could keep the streak alive. I’ve happily already placed money on Hurts to win the Heisman at 12/1.

Offensive line is a concern, but Hurts can run. He owns the Alabama quarterback career record with 23 rushing touchdowns and ranks second in school history with 1,976 career rushing yards. Hurts will go bonkers in Lincoln Riley’s system this season.

Sports editor Matt Tait, KU football beat writer Benton Smith, Braden Shaw and myself will pick against the spread for six different games each week. We will keep track of our results throughout the year, so that you can laugh at how bad we are at this.

All lines are from FanDuel's sportsbook except KU's season opener against Indiana State. That line was pulled from OddsShark, as we plan to pick KU's game on a weekly basis as well.