Getting to know: Indiana State football 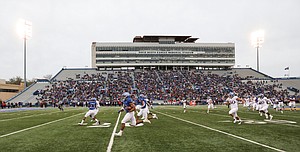 Blue team running back Khalil Herbert runs in a touchdown during Late Night Under the Lights on Saturday, April, 13, 2019 at Memorial Stadium. by Nick Krug

Year 1 of the Les Miles era is officially here.

It is no secret that there has been more excitement regarding the Kansas football team with Miles at the helm. What has been a secret, though, is how this team will look on the football field. The coaching staff has been understandably reluctant to give specifics regarding the Jayhawks. A starting quarterback hasn’t even been announced yet.

None of this means Kansas can’t have success, of course. It just means that there is a level of uncertainty this fall. It would be hard to feel supremely confident about what will take place this weekend, but I’m sure we are all looking forward to seeing what happens.

Indiana State is no joke, and you will learn that as we get into this opponent to preview the season opener. KU opened as a 3.5-point favorite on some betting sites, though that number has since gone up. ISU is ranked No. 16 in the FCS following a 7-4 campaign, in which it was kept out of the playoffs.

The Sycamores have something to prove this year, but then again so do the Jayhawks. I can’t wait to see what happens in this game.

As a reminder, you can follow our live game blog during the contest over on our website. We have a new live blog format, which is fitting for a new era of KU football. You can also follow the KUsports.com staff on Twitter: @KUSports, @mctait, @BentonASmith, @SJacksonLJW & @bradenshaw4real for live updates.

Quarterback — Redshirt senior Ryan Boyle is coming off a strong 2018 campaign, in which he was named the Missouri Valley Football Conference Newcomer of the Year. Boyle threw for 1,627 yards and 12 passing touchdowns, while completing 128-of-205 attempts. He also added 610 yards and six scores on the ground. The former Iowa quarterback helped ISU lead the FCS in fewest turnovers last season.

Running backs — Behind a veteran offensive line, ISU had success running the ball last season. The Sycamores accumulated 2,511 yards on the ground in 2018 after recording just 1,185 in 2017. ISU averaged 226.9 yards in conference action, which was the second-best mark in the league. Juniors Titus McCoy and Peterson Kerlegrand will be the key members of ISU’s rushing attack.

Receivers — KU’s veteran secondary will have to focus on sophomore receiver Dante Hendrix. In 2018, Hendrix started in 11 games and caught 47 balls for 681 yards. He produced four touchdowns on the season as well. ISU also brings back Dante Jones II, Dakota Caton, Rontrez Morgan and Joe Wildt at the receiver position.

Defensive line — Last year’s defense was gashed by opposing rushing attacks, as the Sycamores surrendered 197.6 yards per game on the ground. Indiana State will attempt to neutralize the ground game in Week 1, starting with the four players on the defensive line. Junior Cade Peratt and redshirt junior Kaleb Brewer are the starting defensive ends, while redshirt senior Michael Ghant Jr. and redshirt sophomore Henrick Barndt are the defensive tackles.

Linebackers — Indiana State’s defense is anchored by redshirt senior linebacker Jonas Griffith. The three-time All-American led the MVFC in total tackles a year ago with 132, including 81 unassisted stops. Griffith paced the nation with 7.4 solo tackles per game and ranked fifth in the nation with 12 stops per contest. While Griffith is manning the middle of the defense, Clayton Glasco and Matt Thompson will serve as ISU’s starting outside linebackers.

Secondary — The back end of ISU’s secondary will feature a young group. Cornerback Kewawvis Cummings, a redshirt senior, is the only upperclassmen listed as a starter in the first official depth chart. Mehki Ware, a redshirt sophomore, is the team’s other starting corner. Sophomore Ty Hambright is the starting free safety, while redshirt sophomore Michael Thomas is the strong safety.

SPECIAL TEAMS — In 2018, the Sycamores made 12 field goals in 11 games and it led to success in the red zone. ISU ranked fifth in the nation in the red zone, scoring 91 percent of the time on 46 attempts. In his career, senior kicker Jerry Nunez has made 15-of-19 field goal attempts and all but one of his 41 point-after-attempts.

FUN FACT — Both head coaches are University of Michigan alums with Les Miles graduating in 1976 and Curt Mallory in 1992. Both coaches played for the Wolverines with Mallory playing on three Rose Bowl teams and Miles playing on two Big Ten Championship teams. Miles was also an assistant coach while Mallory was a player.

VEGAS SAYS… It has been funny to see this line move as we get closer to the game, because it really echoes my view of this matchup. The closer we get to Saturday, the more I just think the Jayhawks are going to win comfortably. I have no logical reason for this mindset, because I truly don’t know what this team will look like.

After opening as a 3.5-point favorite, KU is now favored by six points as of Friday afternoon. Maybe it is the long offseason making me delirious. Maybe I’m buying into the Les Miles’ impact after watching ‘Miles to Go’. Maybe I’m just being foolish, but I’m fine with giving up those points in Game 1 of the Les Miles era.

The change in the spread reflects more Jayhawks and others betting on the big school. 3.5 pts was pretty low and potentially reflecting the history of our program more than the current status of the program. I’m still expecting the team to be at least a TD better per game.