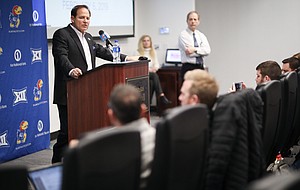 Are you as excited as the KU sports staff for the start of the college football season?

Ahead of KU's season opener against Indiana State, sports editor Matt Tait and I recorded a bonus podcast to preview Saturday's contest. We debated five different over/under bets for the first game of the Les Miles era.

The brief podcast will be a weekly occurrence, and we will keep track of how we do on these over/under bets all season. You can even voice your opinion on whether you agree with the over or the under on all five lines by participating in the polls on Twitter.

I have pasted all five polls in this blog so that you can have it in one location.

The five over/under bets are about KU's total rushing yards, turnovers forced, how many catches the leading receiver will have, how many quarterbacks will play and what the total score will be.

So basically do you believe #kufball will play multiple quarterbacks on Saturday?

Haven’t done more than reading the articles a couple weeks ago about ISU being a ranked FCS Sr team that was fairly conservative and didn’t turn the ball over much.