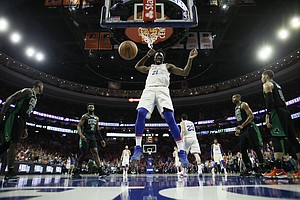 Philadelphia 76ers' Joel Embiid in action during Game 4 of an NBA basketball second-round playoff series against the Boston Celtics, Monday, May 7, 2018, in Philadelphia. (AP Photo/Matt Slocum)

In the first three games of Philadelphia’s Eastern Conference semifinal matchup with Boston, star center Joel Embiid averaged 24.3 points and often became the focal point of his team’s offense. The problem with this particular approach for “The Process” was the Celtics entered Game 4 with a 3-0 lead.

In the former Kansas big man’s first playoff elimination game, Embiid and the Sixers took a different approach and, with the help of a career night from new starting guard T.J. McConnell, knocked off Boston to stay alive.

Leading up to Monday’s win-or-go-home outing for Philadelphia, both ESPN’s Zach Lowe and The Ringer’s Kevin O’Connor pointed out the lack of success the Sixers had offensively when feeding Embiid in the post.

During the first three games of the series, when Embiid received the ball via post-up and shot — an approach welcomed by Boston, by not sending double-teams — the Sixers only produced 23 points on 42 such plays.

From the opening minutes of Game 4, Philadelphia clearly had a different agenda, showing a concerted effort to bring some variation to its offense, with more actions designed to free cutters headed for the paint and the Sixers opting to post up Dario Saric or Ben Simmons when a smaller Boston defender ended up on one of them. Philly didn’t force-feed Embiid and the rest of the team benefited as a result.

While the 24-year-old 7-footer only scored on 1 of 4 shots directly off his post-ups, Philadelphia actually fared far better on his post touches overall. During Embiid’s 35 minutes on the floor, he received the ball 10 times on post-ups and the Sixers scored on 5 of them, netting 11 points (1.1 points per possession).

Embiid finished with 15 points, 13 rebounds, 2 assists and 2 turnovers and looked comfortable deferring more often for the well-being of his team. The masked face of the franchise — or “Phantom of The Process” — shot 6-for-15, while Saric (25 points) led Philly in shot attempts (9 of 17) and Simmons (19 points) got more involved as a scorer (6 of 15).

When his teammate did seek out Embiid in the post, unlike earlier in the series, it tended to work out. In the opening minutes, the starting center went old school, scoring over Al Horford with a jump-hook after backing him down

In the second quarter, Embiid first made an impact in the post by drawing a foul on Marcus Morris, whom he pinned beneath the rim (more on that KU connection to come). He later posted up Aron Baynes on the right block and passed out of a double team to feed McConnell (19 points, 9-for-12 shooting) for a score inside.

The Sixers finished the half in style on a set that began with Embiid posting at the left elbow. After giving the ball to J.J. Redick on a handoff and rolling to the paint, the big man threw down a jam for a 47-43 halftime advantage.

Joel Embiid ends the 1st half with authority!#PhilaUnite

In the third quarter, one Embiid post-up on the left elbow eventually turned into a wide-open McConnell 3 that pushed the margin to 76-62. In the fourth, after Embiid drew a foul while posting up Greg Monroe, the side out of bounds play that followed concluded with a McConnell layup.

Amid all the countable contributions Embiid made to the win, he also kept the raucous Philly crowd involved, sometimes with the help of his opponents.

In the second quarter Marcus Smart reached in after Embiid secured a defensive board and knocked the visor on the big man’s mask, giving the Sixers star the chance to play to the crowd and for the fans to boo Smart — a pastime with which Kansas fans surely are familiar.

The intensity turned up even more a few minutes later, when Embiid tried taking the ball from Terry Rozier after the point guard was whistled for an offensive foul. The two had to be separated after Rozier pushed Embiid and swung at them, leading to double technical fouls.

Of course, Embiid had something to say about it during his post-game press conference.

“Too bad he’s so short that he couldn’t get to my face,” Embiid deadpanned.

In the third quarter, with Philadelphia making a run, Embiid let another former Kansas standout, Morris, know the Sixers were getting in the Celtics’ heads. Morris responded by first flashing three fingers, then zero, referencing the state of the series entering Game 4.

Great exchange between @JoelEmbiid and Marcus Morris after Brad Stevens was called to a technical foul. Embiid was pointing his head to signal” We are in your team’s head.” Morris had three fingers up before forming a circle for 3-0 series lead.

Dull moments don’t exist in Joel Embiid’s world. Check in to see what he has in store on Wednesday, when the Celtics and Sixers play Game 5, in Boston.

I love Joel Embiid, but he needs to tone down the trash talk. Also, doesn't he know that all former Jayhawks are supposed to be brothers? FOE!