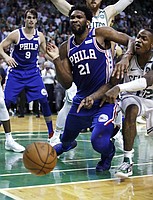 Philadelphia 76ers center Joel Embiid (21) drops to the floor as the ball bounces out of bounds after hitting him, as Boston Celtics guard Terry Rozier, right, points during the final seconds of Game 5 of an NBA basketball playoff series in Boston, Wednesday, May 9, 2018. The turnover helped the Celtics keep the lead as they defeated the 76ers 114-112. (AP Photo/Charles Krupa)

In every great NBA player’s narrative there’s a moment he’d like to forget that actually turns into a point in time that shapes the rest of his career for the better. For Philadelphia uber-center Joel Embiid, that instant might have come Wednesday night in a season-ending loss.

Trailing Boston by two with the shot clock off in the fourth quarter of Game 5, the Sixers turned to a suddenly unmasked Embiid for a potential game-tying basket. The former Kansas big man faced up Celtics center Aron Baynes, drove to the paint and couldn’t finish a layup or secure the ensuing offensive rebound, as Boston point guard Terry Rozier snuck in to swipe at the ball, which went out of bounds off of Embiid with just more than 10 seconds on the game clock.

Already down on the court, Embiid slammed his hands on the floor in disbelief and let his 7-foot-2 body fall prostrate. The Celtics went on to win 114-112, ending Philadelphia’s season in the second round of the playoffs.

The play was the antithesis of the rest of Embiid’s night, as his second season in the NBA concluded shortly after unleashing his array of talents. Smooth jumpers, graceful finishes around the rim, protecting the paint on defense. Peak Embiid. The only thing lacking was a 3-pointer, but he finished with 27 points (9-for-18 shooting), 12 rebounds, 4 assists and 4 blocks in his best performance of the postseason.

“It’s hard, because I feel like we had a pretty good chance of beating them,” Embiid said during his post-game press conference. “You’ve gotta learn from it and come back next year and do better.”

.@JoelEmbiid breaking out the moves! pic.twitter.com/h8n8Hbhjc7

Some observers didn’t even expect the Sixers, a league laughingstock during their rebuild, to reach the playoffs this season. But by pairing Embiid with 2016 No. 1 pick Ben Simmons, Philadelphia found a young one-two punch as intimidating as any in the NBA. The duo helped Philly finish the regular season 52-30, capturing the No. 3 seed, before the 76ers disposed of Miami, 4-1, in the first round.

Considering Embiid is just 24 years old, Simmons is 21, Dario Saric is 24 and 2017 No. 1 pick Markelle Fultz (a non-factor this year) is 19, the confident, young Sixers rightfully anticipate better playoff finishes to come. But they also thought they were capable of more right now.

“We feel like when everybody’s on we’re unbeatable,” the always self-assured Embiid shared. “But we committed a lot of mistakes. We’ve gotta learn from it. But we definitely have more to show.”

The spectacle known as the Sixers will keep the NBA Playoffs compelling for years to come if — and this caveat always must be included when discussing Embiid, who missed his first two pro seasons due to injuries — the multi-skilled Cameroonian known as “The Process” can remain healthy.

A Turkish dish with a Cameroonian jam. pic.twitter.com/v8msmph2Af

“I feel like this season was kind of like a success,” Embiid said. “Our goal was to make the playoffs. And then we changed it and we wanted to get the third seed. And then it was the 50 wins. And going into the playoffs we felt like we had a really good chance, especially after winning 16 in a row (to close the regular season). We felt like we had a good chance to get to at least the conference finals and that was our goal. We didn’t make it, but the whole season we changed the goals we set at the beginning of the season.”

The franchise center said he and Simmons “have a lot of room to grow,” and referenced the beginning of the Kevin Durant and Russell Westbrook era in Oklahoma City as an example of how two young talents can reshape an organization.

“I think we’ve got a bright future,” Embiid said, and related an exchange he and Simmons shared after their loss to the Celtics, when the guard pointed to the center’s hands and predicted there would be “a lot of rings” on Embiid’s fingers.

“I’m excited to learn from this stuff, because I felt like we had a pretty good chance,” the big man continued, “but you’ve just gotta learn from it and we’re gonna be fine.”

As a wise man once said: Trust the process.

Not the way I wanted it to end but Hell of a series... Much respect to Boston and those fans.. y’all made it fun #TheProcess pic.twitter.com/lT6g0T6p89

The last minute resembled more body banging than one sees in a NFL game.

I like when the refs step back a little and make the winner earn it - especially in the paint.