Here are my week 5 Big 12 football picks for this weekend's slate of games.

The results, so far, for this season's picks:

Let's move on to this weekend's Big 12 slate: 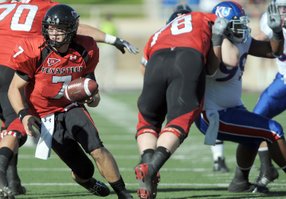 Texas Tech at Kansas, 11 a.m.
Line: Texas Tech by 6.5
Pick: vs. line: Texas Tech; straight up: Texas Tech
One-line reason: Both teams are somewhat of an enigma (Texas Tech has only looked good against an 0-4 New Mexico team, while Kansas showed promise against Northern Illinois, but then was routed at Georgia Tech). The guess here is the home field will keep the Jayhawks competitive, but the image of Red Raiders quarterback Seth Doege throwing at will all over the field (he's averaged 316 yards, more than three touchdown passes per game and has completed 76.3 percent of his passes, all without an interception) can't escape the mind. Most of that reasoning stems from KU ranking dead last in the country in rushing defense, pass efficiency defense, total defense and scoring defense.

No. 14 Texas A&M vs. No. 18 Arkansas (Arlington, Texas), 11 a.m.
Line: Texas A&M by 3
Pick: vs. line: Texas A&M; straight up: Texas A&M
One-line reason: For the sake of this pick, here's hoping the Aggies clean up their four turnovers last week against Oklahoma State, a game they still led, 20-3, at halftime. Should that happen, I like their chances to cover here.

No. 15 Baylor at Kansas State, 2:30 p.m.
Line: Baylor by 3.5
Pick: vs. line: Baylor; straight up: Baylor
One-line reason: It may be a bold prediction, but I don't see K-State, which currently flaunts the Big 12's top-ranked scoring defense and total defense, holding onto that distinction after running into Baylor quarterback Robert Griffin. The junior QB is a legitimate Heisman contender who's thrown for 13 touchdowns versus only 12 incompletions and zero interceptions in three games. 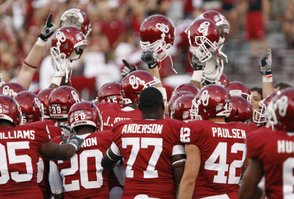 One-line reason: Perhaps the Sooners, who fell from No. 1 to No. 2 in the latest Associated Press poll without losing a game, approach this battle with the mind-set of putting up some style points for the voters. If that happens, they should win by 40 at bare minimum.

No. 17 Texas at Iowa State, 6 p.m.
Line: Texas by 9.5
Pick: vs. line: Iowa State; straight up: Texas
One-line reason: Paul Rhoads and the Cyclones, who stunned Texas (28-21) last year in Austin, are off to an improbable 3-0 start. I'm looking for the Longhorns to reverse that fortune, but 9.5 is a big spread. I'll take the points against the line.

That should be all for now, friends. As always, discuss.

To win or to cover? It's a tall order in either case, since both Texas and aTm are smarting over past results and will out to prove something.

Ahhhhh, NO. They will NOT. Cause, the Defensive Coaches don't have a Freaking Clue.

are you suppose to be the local expert? emaw.