Week 6 Big 12 picks: A farewell and thank you from Conference Chatter

I want to start this blog entry by thanking the loyal readers, fans and commenters of KUsports.com.

For more than three years, I've had the honor of keeping the Conference Chatter blog, where I've detailed my observations about hot topics in the Big 12. I reflect with fond memories, for instance, on live blogging two BCS Championship games involving Big 12 teams (Oklahoma in 2008 season, Texas in 2009 season), interacting with the KUsports.com community during the over/under contest of 2010 and chiming in during the conference realignment craziness last June and this year.

Much of the reason I enjoyed writing the blog was because of the lively discussion generated by the readers. You guys made this blog relevant for more than three years, and for that, I will be forever grateful.

With that in mind, I wanted to write this entry to bid the KUsports.com community farewell.

I recently accepted an offer to become the social media manager at Grantham University in Kansas City, Mo. It's an exciting and incredible opportunity, and I look forward to building and maintaining professional relationships at Grantham as I did at the Journal-World and KUsports.com since February 2008.

Thank you for making these last three years so memorable.

I will still make picks on the KUsports.com weekly staff football predictions this season, and look forward to catching up with you guys in the comments section.

We still have some Big 12 games this weekend, so let's close the blog with predicting those battles, straight up and against the spread. Here's how I've done this season: 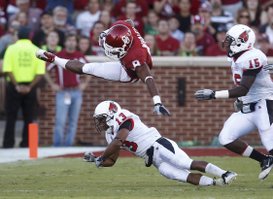 No. 3 Oklahoma vs. No. 11 Texas, 11 a.m.
Line: Oklahoma by 10.5
Pick: vs. line: Texas; straight up: Oklahoma
One-line reason: I could see UT's defense (12th in country in scoring defense at 14.75 points surrendered per game) keeping the Longhorns in the game, but I'm not expecting Texas to threaten OU's bid at a perfect season.

Missouri at No. 20 Kansas State, 2:30 p.m.
Line: Missouri by 3.5
Pick: vs line: Missouri; straight up: Missouri
One-line reason: I don't like doubting this Bill Snyder-led Wildcats squad, but the late-game comebacks can't last all season.

Iowa State at No. 25 Baylor, 6 p.m.
Line: Baylor by 15
Pick: vs. line: Iowa State; straight up: Baylor
One-line reason: ISU's 3-0 start was nice and this game could be close for a while, but the Cyclones were finally exposed in a 37-14 home loss to Texas last week. I'm expecting losses to follow. 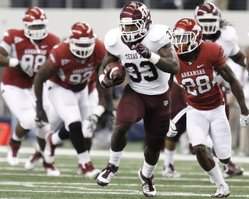 Line: Texas A&M by 8
Pick: vs. line: Texas Tech; straight up: Texas A&M
One-line reason: The Aggies have lost their last two games by a combined five points; I could see them ending up on the other side of a close game on Saturday by pounding the football with Cyrus Gray and Christine Michael; Texas Tech is fourth-to-last in the country in rushing defense, allowing a whopping 229 yards on the ground per game.

That should be all, friends. As always, discuss.

And, again, thank you.

Kidding, congrats and best of luck.

What the hell, a positive post out of you. I didn't know you had it in you. Now say one nice thing about Gill without it being a backhanded compliment.

I was going to go with:
I hear Grantham is the Harvard, errr, University of Phoenix of the Midwest.

I appreciate it! Thanks for the kind words. I'm still waiting on that nice comment about Gill as well. Perhaps someday, haha.

The Odds. Why play football games if the results are known? I mean, my reasons for being a fan include beliefs in passion and esprit de corps, and being a part of KU's fate via actually showing up on a Saturday. Unlike KUsports.com beat writers, I don't care a flyin' flip about what the past says about my team.

that's the spirit. I actually am in agreement with Sorrentino and the majority of jayhawk nation in that this will be an embarrassment of a game for us. Sorry I'll gladly eat my words if they don't but their offense is tops in the country and our defense is the second worst in the country. That's pretty big odds

I admire the positive thinking, but can't bring myself to pick a close game here, sir. Not with that OSU offense in Stillwater. I suppose stranger things have happened. I heard today the line jumped up to 35. Has anyone else heard that? I'd consider taking KU and the points in that scenario. Thanks for commenting!

OU and Texas, give me UT to cover and OU for the win

Missouri and KState, give me KState across the board

Kansas and Okie St., I think KU can get into the 30's on offense so I'll be different and take KU to cover and OSU for the win

ISU and Baylor, Baylor's defense is crap so give me ISU to cover and Baylor the win

TAMU and Tech, Tech across the board as A&M continues their Britney Spears impersonation...Oops, I did it again!

Much obliged, TX. Thanks for making picks on the blog every week.

Where are you in TX? If you're from around where I grew up, go Rangers.

I'm down in Houston, so I had to suffer through that joke of a season, but I do cheer for the Rangers as well.

Well, so far this year OU has managed to evade the #1 jinx. They defeated Florida State in their stadium, avenged the last year's loss to Missouri and managed to squeek by Ball State. In times past, teams like Ball State have snuck up on the Sooners. And since Oregon is not on their schedule this year, the Pac 10 official crews do not have a chance to foul up that game.

We just might make it this year, and get Alabama or LSU, whoever wins their meeting in November.

Sorry to see you go, Eric, but good luck on what sounds like a great opportunity for you.

As for the KU game, ... I'll listen to it and hope for the best, but let's just say I'll probably end up thankful that it won't be on TV. Eric, I think you're being too kind to the 'Hawks in saying they'll barely miss out on covering the spread. I understand that the OSU defense is pretty good, too, so I think it will end up something like 55-10.

Hey Len, means a lot. Thank you! Your frequent posts on my blog have created lively discussions. I've really enjoyed it.

So you like a rout this weekend. I could see 55-10, but I also think the OSU defense will give up more points than that. We'll see. Perhaps take the over?

Sorry to see you go, Eric! All the best in your future endeavors.

I appreciate the time and the kind words!

congrats on the new opportunity! Social Media Coordinator... does that mean that you're job is to facebook and tweet all of the school's goings on?

Thanks, Jonathan! Part of the job will involve Facebook and Twitter interaction, but I'll also be taking on projects within the marketing department, blogging, etc. I can't wait for the challenge. I appreciate you taking the time today to comment!

Best of luck Eric, I've enjoyed your articles on here.

Mr. Berry! One of the original commenters on this blog. Thanks for your time over the years.

Lori! Fantastic to see you on here. Thanks for taking the time to come on the blog today. The countdown continues. Three days. Can't wait to see everyone on Monday. Hope you have a nice weekend!

Thanks for all your work Eric! Good luck with the new job.

Thanks a bunch! It was a heck of a run. You guys really made this blog. Thanks for the time today.

Thank You, for all the time and effort... good luck in everything you do.

Tip of the cap to you as well, sir. Means a lot!

I took Okie State over Aggies 2 weeks ago and I took Ark over Aggies last week--I will take Tech over Aggies again until A&M can show they can stop a no huddle, hurry-up offense as they have been worn down the last 2 games because of it. I also like Texas to win straight-up against OU--Texas D is tough, Texas runs some interesting formations/calls on offense and the game actually means more to Texas to show they aren't having a "down year".

Thanks for all the blogs Eric - I always enjoyed Conference Chatter.

Great to hear! Thanks. In the scope of the conference, it was great following a hoops title in 2008, and coming close in football with UT and OU two and three years ago. Really hope the conference stays together for the sake of this region. Hopefully the TCU news was a step in the right direction. Thanks again for logging on today.

Out with the old and in with the new. Since my pencil written resume was not accepted for athletic director I am applying for the position recently left by Eric. Picture this:

Click on the link and the standard "opinions do not necessarily reflect blah blah nudity blah blah blah Turner's cussing rules does not apply blah blah blah. Must be 18 to enter" warning shows up. Once the reader clicks through the warning we see a mask wearing ahperpointspread as to hide my idenity from past bookies and babies mommas that I owe money to. Gone are the white walls of Ericks section 8 apartment and in is a on location shoot based on the previous weeks picks. If i did well it will be eating a t-bone off of a working girls hinny while her coworkers preform behind me. If not it will be over a bowl of soup at the lords diner. Picks are given and any information I feel is worth sharing is also stated.

But let's not stop there. I'll also attend press conference where Turner will be forced to answer the tough questions like, "say execute again! Say it one more time! I dare you mother lover! Say it!" right before I bang my head into the wall like "the situation" because I'm so frustrated.

Sit down interviews with Sheahorn will also be done. Imagine Ahper and Sheahorn walking down memory lane

Discussing his purple past and the ruins of the stadium of Ill State football stadium which was torn down because he could not raise the funds to keep it from crumbling.

First Nebraska, then Colorado, soon TAM and maybe Missouri...and now Eric the Great!!?? What the hell is going on...my life is coming apart at the seams!!!! :)

Eric, best of luck and thanks for a lot of fun. Just promise us that Keagan doesn't take over the blog!!

You will get that complement for Gill from ahperse........about the same day monkeys fly out of my butt!!!!

Is the school nickname the Grantham On-Liners??