What to make of Chip Lindsey's hiring, and is KU basketball bad for your health? 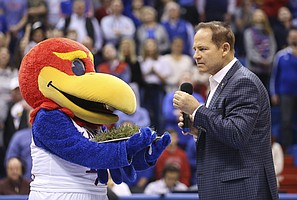 Newly-hired Kansas football coach Les Miles tastes a piece of Kansas grass as offered by Baby Jay as he is introduced to the Allen Fieldhouse crowd during halftime of the Jayhawks’ game against Stanford. by Nick Krug

Already more than two weeks removed from the day Les Miles was introduced as the Kansas football program’s new head coach, there seems to be no stopping the buzz surrounding the program.

This past weekend Miles invigorated the Allen Fieldhouse crowd at halftime of the basketball game versus Stanford by simply strolling onto the court, saying a few words, eating some grass and giving away some Yeezys.

The KU fan base seems to love its new football coach and the hope his presence provides for a program that has fallen flat since a previous administration forced Mark Mangino out.

And the offseason fervor figures to continue in the days and weeks ahead, as Miles continues to fill out his staff and he and his coaches carry out a critical step in the rebuilding process: recruiting.

With that, let’s get to today’s questions. And remember, you can hit us up anytime on Twitter by using the hashtag, #AskKUsports.

What do you think about Chip Lindsey as OC? #AskKUsports

While I haven’t yet got the chance to speak with Lindsey directly — plans from KU staff to make Miles’ hires available for interviews remain in the works — the more I read about him and listen to what he has to say the more I’m intrigued about what his addition will mean for the program.

It shouldn’t surprise anyone if Lindsey ends up being KU’s quarterbacks coach, as well. And QB has been a position of need for the program since Todd Reesing graduated.

It’s not realistic to think Lindsey will be able to make a quality Big 12-level QB appear out of thin air in time for the 2019 season. But the man already has extended an offer to a Class of 2020 four-star prep by the name of Robby Ashford.

That doesn’t mean Ashford will actually end up at KU and become the offense’s savior. It does give you a sense though that Lindsey will be aggressive in finding an effective QB to fit into his system.

Lindsey plans on building the offense around KU’s play-makers, and while it may take time to identify which Jayhawks can fit that bill other than Pooka Williams and Khalil Herbert — I happen to think Daylon Charlot will, too — I think fans should be excited about the hire.

Because this one was asked during basketball season and most KU football outcomes have been foregone conclusions for years now, I’m going to assume this health-related inquiry is about KU basketball’s recent run of close games.

It really did look at various points that KU was going to lose to Marquette, Tennessee and Stanford.

I honestly was impressed that the Jayhawks didn’t drop any of those, because this is a team that’s still finding its way.

There’s no calming influence or unflappable veteran on this roster such as Frank Mason III or Devonte’ Graham to carry the Jayhawks to a victory when the odds are against them. And yet this team still is unbeaten.

The deeper we get into the season, the more it looks as though Dedric Lawson and Devon Dotson will be the players who lead game-changing runs when Lagerald Vick isn’t dominating offensively.

So that should be encouraging for the KU die-hards out there who don’t handle losing or tight games well. This team has room to grow and it’s already in a pretty good spot. Plus, the offense might not look as out of sorts in coming weeks, as Udoka Azubuike’s ankle injury forces Bill Self to go back to the four-guard lineup that has worked so well the past couple of years.

From Matt Roesner via email: Coach Miles will have ~15 available slots for recruits this coming year.  In looking at the KU football team in 2019, what are your thoughts on key positions of needs, and how the graduating class (and any other losses of eligibility) are going to influence Coach Miles and KU?

As I detailed in a recent story, the football team is losing half of its 2018 starters.

There’s no way to replace Daniel Wise and Joe Dineen on defense. But defensive linemen and linebackers will be positions of need in this recruiting class.

Lindsey needs to find a QB for the Class of 2019, too. Whether that’s a high school senior who can be a longterm solution or a transfer who can step in more ready to compete — or both — don’t be surprised to see Kansas bring in a player to compete with Carter Stanley and Miles Kendrick.

It will be tricky, because there are positions where KU needs help immediately and a lot of times, particularly with true freshmen, first-year players are not ready for those types of roles. Developing returning players who haven’t been heavy contributors previously will be critical.

#askkusports what makes tony hull a valuable asst. coach. he is straight out of high school coaching

Hull is no pushover. He’s a big, tough dude. But the running backs like playing for him and respect him. There’s value in that.

But, as I’m sure everyone knows by now, Hull’s been a prized member of KU’s staff because of his recruiting prowess back in and around his home city of New Orleans.

If Hull wasn’t at KU, there’s no way Pooka Williams, Mike Lee or Corione Harris ever would have signed with the program. And those three players will be pivotal in 2019.

Having the foresight to bring Hull aboard was one of the better moves David Beaty made in his four years on the job.

It seems Miles will keep Hull around, too, so that’s good news for the program in this early stage of a massive rebuild.

From Steven McKillip via email: Is there any information on the "blueshirts" that count towards the 2019 recruiting class? Since they are taken up spots in the 2019 class, will they ever play for Kansas?

While it’s difficult to distinguish in many cases which players from the past few recruiting classes were straight-up scholarship athletes and which ones with which Beaty and his staff decided to take the blueshirt route, I don’t think KU fans should be overly worried about how useful those blueshirt players will be for the new coaching regime.

I wouldn’t be surprised, in fact, if many scholarship and blueshirt players benefit from having new coaches around. A new assistant may see something in a player that a previous position coach didn’t or may be better suited for developing certain strengths within a player.

Plus, a lot of these guys who didn’t contribute much in 2018 will be a year older, with more coaching and lifting and preparation behind them, so, theoretically, they should be more capable of playing a role in 2019.

Now, this line of thinking might not hold up if a number of blueshirt and scholarship players end up transferring for some reason between now and next season. Then you have an even bigger problem just in terms of available bodies. But I don’t think there’s any indication at this point that Miles and his staff plan on running people off or that players wouldn’t want to stick around and play for the new coaching staff.

RE: "It seems Miles will keep Hull around, too, so that’s good news for the program in this early stage of a massive rebuild."

How are you guys getting the intuition for what Miles private thoughts are??? Is he telling you these things? If he hasn't, then you can't justify an inclination one way or the other! If he has, then identify your source, whether that be Miles' direct comments or someone who has been told something directly from him. As a reader when I see these comments, it feels like you're nailing something to a wall that doesn't have a stud behind it.

Joe, I would suggest that the fact Tony Hull is out recruiting for Les Miles is a pretty good inclination that he leans on the side of being kept. They obviously don’t have much more than that to report on at the moment. Just my take as it would be easy for Benton or Matt to simply say they have no clue. I like the, what do you think is going to happen, knowing it may not be right at all. Gives us something to chew on.

I just don't want to chew on leather.

You are so right. I think the term is "wishful thinking." Obviously Hull has done well, and it is sad to think of Miles not keeping him, but it is Mile's call. And all the board promotion in the world is not gonna stop the Head Coach from doing what he thinks is right, and obviously Hull
might be able to get a better job, somewhere else.

Benton/Matt, any inclination on whether the strength coach might be kept. Or is that one of those positions where coaches simply must have their own guy.

No question KU basketball is bad for your health. No heart attacks yet but I've suffered countless broken hearts over the years.