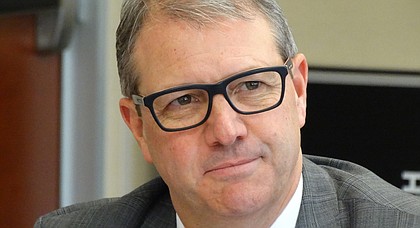 University of Kansas Chancellor Douglas Girod said Monday that KU “ended up in a good place,” in the wake of last week’s addition of four schools to the revamped Big 12 Conference.

During Kansas Athletics Inc.’s quarterly meeting of its board of directors, Girod told the group that welcoming BYU, Cincinnati, Houston and UCF to the conference in the coming years will bring “a lot of strength to the Big 12 and will position us well as a conference as we have Texas and Oklahoma leaving us at some point.”

Their departure is yet to be determined, but it will be by 2025, when the Big 12’s grant of rights agreement. First-year KU Athletic Director Travis Goff said Monday that BYU joining the conference in 2023 and the other three by no later than 2024 was a possibility.

As a member of the Big 12’s expansion committee, Girod was privy to the conversations about each of the candidates discussed by the conference, and he said Monday that conference officials had specific discussions about BYU’s past policies against the LGBTQ+ community.

“They have demonstrated really significant progress in that area,” Girod said. “And I think all the presidents and chancellors felt pretty comfortable with that.”

Regardless of when all of the coming and going takes place, Goff reiterated that he believes the conference is in a much better place today than it was just a few weeks ago.

Goff first spoke about the Big 12’s new additions before last Friday’s game at Coastal Carolina. He said then that the athletic department would continue to emphasize doing what was best for Kansas first and foremost.

“We are in a better stretch here,” Goff said. “The presidents, the chancellors, the commissioner and the rest of the makeup of the Big 12 really acted in strength with clarity around the paths forward, and, honestly, it was really the only path, to add back to the league to give it some more stability.”

Girod said he was pleased with both where KU stands today and what the school’s future “within the Big 12” now looks like. He also said that KU’s status as a Tier 1 AAU research university and a blue blood basketball program “positions KU particularly well during these conversations.”

“This is not your conference realignment of old,” Girod said. “This is not moving the deck chairs. We're seeing major changes (and probably will see) a very different looking NCAA after the first of the year. College athletics is shifting pretty dramatically under our feet.”

In other news at Monday’s meeting:

• Paul Pierce II, KU’s associate AD for Inclusive Excellence, gave a presentation about the department’s “Coach’s Playbook” initiative, which outlines the ways that KU’s coaches are handling and increasing inclusivity within their programs.

The playbook features four pillars that focus on everything from events and community outreach to hosting guest speakers and celebrating heritage months. The program was designed to cultivate a welcoming community that engages all aspects of diversity.

Examples include the men’s basketball program’s recent outing to the Negro Leagues Baseball Museum in Kansas City, Mo., and the football program welcoming in guest speaker C.L. Shepherd, a former NFL player and current motivational speaker whose tag line is “Born in the hood, reaching the world.”

“We already did a lot of these things,” Pierce said. “Which is the great part. Our coaches, throughout our athletic department, have been very aware of the need to create diversity inclusion conversations.”

• Goff said that KU and Kansas Team Health were close to finding a replacement for KU head team physician, Larry Magee, who Goff said was retiring at the end of the calendar year.

“We're closing in on finishing that search out,” Goff said. “Can't replace him fully after all he's done, but we're excited to land the next head team physician for KU athletics… (It’s a) really important hire for us and I’m excited about that.”

• While KAI is still at the beginning of fiscal year 2022, the department’s chief financial officer, Pat Kaufman, provided a final update on the numbers for fiscal year 2021.

After budgeting for a deficit of $11 million last February, Kaufman said the department actually came in with a deficit of around $5 million. When adding to that the surplus carried over from the previous year, Kaufman said KAI “pretty much broke even” on the two-year combined impact of the COVID-19 pandemic.

Salary cuts, furloughs, reduced travel and other cost-savings measures helped KU minimize the negative impact of the sports world shutting down in March of 2020.

“It looks like we were able to escape the two-year COVID impact,” Kaufman said. “But we still have a lot of work to do. Our season ticket holders and donors are still trying to be comfortable coming back into our indoor venues and those types of things, so we know we've got our challenges for our (fiscal year 22), which we're working hard towards.”

Added Girod: “There’s a lot of hard work hidden in all those numbers.”

I don't know - kind of feel like OSU, Baylor, WVU, or maybe a TCU will bail in the near future if the opportunity presents itself.

If the Big 10 comes knockin, we better take it while we can.

Girod, Goff, take the win and work on our program.

The B10 is not interested in adding another B12 school. Especially one with a weak Football team and stadium.

The other B12 teams will stay. Where else can they go? Hopefully the TV money can offset the additional travel all the teams will have.

Big12 is now 3rd Tier Football conference. They were always a tier behind the SEC, now they are also behind Tier 2 conferences like the Pac12 and Big10.

Big 12 might as well rename itself Missouri Valley Conference. This is so dissapointing.

Big 10 revenue payout was 54m per school during a pandemic. SEC was 45.1m for the same timeframe. The Big 10 covers numerous large markets from the East Coast to the Central time zones. SEC might have better Football teams, but the B10 would not be a tier 2 conference. Pac 12, ACC had lower payouts than the B12 by about 5m.

I agree it is disappointing.

Ouch, but they were not prepared, No TV network, and lost 4 schools. B12 leadership had no vision you are right Robert!

This is what happens when you don’t stand for something.

We have added a school with an actual stated anti-gay policy. We’ve added another school where Heil Abbot! Will soon become mandatory after the national anthem, pledge of allegiance and KKK promise are recited.

We have three right wing religious schools, an Aggie school from a slave state, two Aggie schools that would definitely vote to go Confederate if given the chance and two random schools that are good at football.

This is inept, ethically bankrupt and soulless leadership at its normal level of incompetence.

I love the quotes on the annual payouts from the Dixie conference. I think that we are paying those exact same amounts to Charlie Weis….forever. It is Monopoly money. The only reason it has any importance is that Major Milktoast Mushmouth says it does.

Quit supporting this ineptitude. This is a Free State. You are a Jayhawk. Act like one for a change.

Some of you need to stop drinking the Kool Aid from the false rumor mill of KU going to the BIG10. Things in this world are earned not given. The BIG10 isn’t going to just send a invite to Kansas because they are KU! The BIG10 priorities football over all sports, and the TV networks do the same. I agree with the AD that Basketball and being a tier one research school helps KU, stay power 5 in the Big 12 but why would the BIG10 send a invite to KU? Outdated stadium, The state of Kansas offers the BIG10 nothing special recruiting wise, when was the last time a KU home game sold out?? If KU wants to be in the BIG10 they must go out in earn it. Invest big in the football program, upgrade the football facilities, get people back in the seats. What ever happen to that huge upgrade KU was suppose to do to the stadium? I believe it was around 300 million project? or somewhere in that ballpark. If KU wants to be a BIG10 program they must invest like a BIG10 program. Control what you can control!

100% agree Austin! If you go read the messageboard, you will see how much Kool aid is being passed around. No kidding KU fans are considered a cult.

They really believe KU is entitled a BIG10 invite solely on fact that we are Kansas. In fact, someone even posted that our football program should be taken in solely on the merit of the Orange bowl in 2008. Seriously, you cannot reason which these people. They are worse off than the Qanon creeps.

TCU and Baylor may have once been Christian schools but that is a long gone thing of the past. They are as secular as any state school. And while Brigham young they have once been a Mormon school, it sounds like it is no more.

TCU and Baylor may have once been Christian schools but that is a long gone thing of the past. They are as secular as any state school. And while Brigham young may have once been a Mormon school, it sounds like it is no more. Therefore, the 12 does not have three religious schools

Baylor is extremely religious. Almost as must as BYU. .. FACT.

I would call BYU a progressive Mormon school.

LDS has been quietly reshaping some original elements of the Mormon religion for a while now. Numerous updates have been adopted over the years and the book of Mormon has been rewritten a few times.

B12 schools no longer in the conference-

Disaster! Anyone buying this load of weak PR is not a BBall fan. Now, 4 big 12 schools have made smart moves while KU fumbled themselves into a 3-tier existence. It's a dramatic betrayal of Bill Self and his magnificent program.
Now we must really worry about losing Bill Self, and he really can't be blamed- when that happens we will officially be left at Missouri Valley level. This is destruction by Inattention.

Wow, we have a lot of chicken littles running around on this board.

In football we are losing Oklahoma (always overrated and lose miserably in the CFP) and Texas who has been not very good for years.

It this the greatest outcome of all time, of course not but it also isn't as horrible as it is being portrayed on this board.