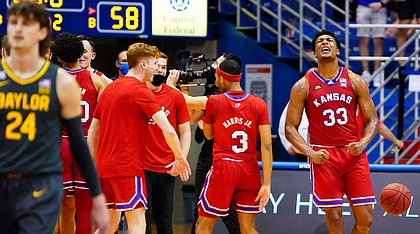 The Kansas men’s basketball team landed in a familiar spot in the Big 12 preseason coaches poll, released by the conference on Thursday.

With 80 points and eight of the nine available first-place votes, Bill Self’s Jayhawks were picked as the team to beat during the upcoming season.

It marks the 10th time in the past 11 seasons — and 19th time in the 26-year history of the conference — that Kansas has been chosen as the preseason favorite. But, year in and year out, Self and his players have emphasized that what people think in October does not mean much in March.

“Preseason polls don’t mean anything other than the fact we hope to have a team that has a great chance to have a great season,” Self said in a news release after Thursday’s poll was released.

Kansas, which finished in a tie for second in last year’s Big 12 race, came in ahead of second-place Texas (70 points and 2 first-place votes) and third-place Baylor (67) in this year’s preseason poll.

The 10 Big 12 coaches who vote in the annual poll are not allowed to vote for their own teams.

Veteran ESPN broadcaster and former head coach, Fran Fraschilla, who has covered the Big 12 for the past several years said Thursday that the tight vote and talent at the top of the conference should set up an outstanding race in 2022.

“The success of the Big 12 over the last decade has been based mostly on upperclassmen players who developed into stars,” Fraschilla told the Journal-World on Thursday. “With immediate eligibility transfers this season, the league continues to stay old and, thus, will be as good as it is usually advertised.”

Beyond that, the 2021-22 Jayhawks have four other seniors or juniors who figure to be in the rotation and four of five starters back from last season’s team.

Both Texas and Baylor are projected as top-10 teams in the national polls entering the upcoming season.

Although the Big 12 portion of the schedule does not arrive until January, all 10 teams will head to Kansas City next week for the annual Big 12 Men’s Basketball Tipoff on Wednesday.

Kansas will send Self, Agbaji and McCormack to represent the program, and portions of the media day will air on Big 12 Now on ESPN+ from 8:45 a.m. through 12:30 p.m.

Kansas is slated to open the regular season on Nov. 9 against Michigan State at the Champions Classic in New York City.

Wow! Dominance.
It’s interesting to look back at a few of the whiffs.

The roster is loaded. Might be cutting down the nets in April. Need to sweep Texas. But we are loaded.

Is it published who voted for each team? My guess is that Weber and Drew didn’t vote for KU!

Hey Matt, is it published who voted for each team? My guess is that Weber and Drew didn’t vote for KU!

Am reserving judgement till I see us play a quality team.