Michigan State coach Tom Izzo happy with team, eager to see what it has in tough test vs. Kansas 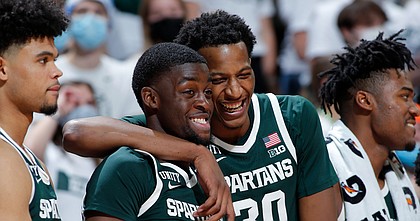 After his team’s 83-60 exhibition win over Grand Valley State earlier this week, Michigan State coach Tom Izzo said he liked his team and not just because it cruised to an easy win.

“I really like what I have to work with,” Izzo said. “They’re good guys and good students.”

How good they are as basketball players — and, more importantly, as a team — will be revealed in a matter of days, when the Spartans take on the third-ranked Kansas Jayhawks in the season-opener for both teams in New York City. 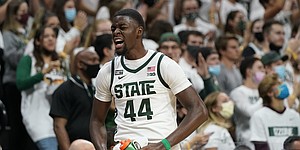 Michigan State forward Gabe Brown reacts after a play during the second half of a ...

But Izzo seems far less worried about who wins and who loses and is more eager to find out what just playing in the game will do for his 2021-22 Spartans, who have talent, experience and versatility but are still trying to lock into an identity.

“The beauty of these games, like Kansas, is you get to see where you’re at,” Izzo said after the win over Grand Valley State. “… We’re right into the fire right away.”

The Spartans are coming off of a 15-13 season a year ago, which included a sub-.500 mark of 9-11 in Big Ten play. That was enough for them to sneak into the NCAA Tournament, but it landed the Spartans an 11 seed and a date in the First Four play-in games, where they lost to eventual Final Four participant UCLA in overtime.

The Spartans led by 11 in that game and imploded a little down the stretch.

After a pair of exhibition victories, Izzo’s team appears to be locked into a rotation of nine or 10 players. But Izzo would like to see that number trimmed a bit and may not have the luxury of going 10 deep against Kansas.

“(I’d like to) shrink it a little bit,” he said. “I think we have seven right now that are etched in stone. What you hope to have is an eight-man playing group and then two guys that can come in (in certain) situations. I think we’re close.”

Izzo referred to his current reality as almost having “seven starters.”

Christie, the 6-foot-6 freshman shooting guard who was ranked No. 20 in the 2021 class, led the team with 31 points combined exhibition play. But Brown was right behind with 30 and Hauser, the former Marquette star, chipped in with 22 points and 15 rebounds in the two wins.

The roster makeup provides Izzo with lmore lineup versatility than he typically has had. He showcased that in the exhibition games by playing his top two point guards (Hoggard and Walker) together and also by playing small with the 6-9 Hauser at the 5 and big, with the 6-8, 225-pound junior Hall at the 3.

As most of Izzo’s teams have been, these Spartans are big and physical and also have good length at all five spots on the floor. More than that, though, Izzo said this week that he believed his current group was already better than last year’s squad defensively, on the glass and in transition.

“We’ll find out shortly how much better,” Izzo said. “I watched Kansas last night (and) things get a little more real now.”

Said Christie of opening his college career on the big stage against a blue blood program in the Big Apple: “It’s going to be a really good test for us right away, and we want it. We’re ready for the test and we want nothing more than to play the best teams in the country right away.”

Here are a few of Izzo’s thoughts about his top nine players from an interview he did with 247 Sports in late October.

On co-captain F Gabe Brown (6-8, 215, Sr.) - “He’s one of the best shooters on this team. He’s improved his shooting. He’s improved his arch. He’s improved is ballhandling a lot. What he has to im-prove is his defense, and he’s made strides in it, and his re-bounding, which I think will be two critical things to take him from good to great.”

On co-captain F Malik Hill (6-8, 225, Jr.) - “I think Malik is a guy that is ready for a breakout season. He can guard 1 through 5. He’s gotten even stronger. He’s always had a great basketball body. He’s adapted to the game really well.”

On PG Tyson Walker (6-0, 175, Jr.) – “He’s a multi-dimensional kid. He’s got phenomenal athleticism. Not the biggest guy but can dunk it any way you need to. He’s a true point guard. He can pass it, he can shoot it, but he has the athletic ability and he has phe-nomenal hands. He gets his hands on more balls than any-body I’ve had in a long time.

On G Jaden Akins (6-4, 180, Fr.) - “I think he could be a defensive dynamo. But his offense is a lot better than I thought. He’s shooting the ball well. He creates, he can create off the dribble. He’s a phenomenal athlete.”

Kansas basketball coach Bill Self on the Champions Classic & the challenge of facing Michigan State by KUsports.com

Kansas junior Christian Braun breaks down what he expects to see in the season opener vs Michigan St by KUsports.com

KU senior Mitch Lightfoot on the excitement of the Champions Classic & what he wants to see in NYC by KUsports.com

They’re a big team. It will be interesting to see how our speed matches up with their size.

It would seem our chances increase substantially if Remy and others can apply pressure to the ballhandlers initiating the O.

I agree. As is always the case when we are outplayed, the athleticism will be the big test. They will have a size advantage. If we are not quicker and more athletic we will be in trouble. Much like the game with USC last year.