Jayhawks in the mix for Northeastern point guard Tyson Walker 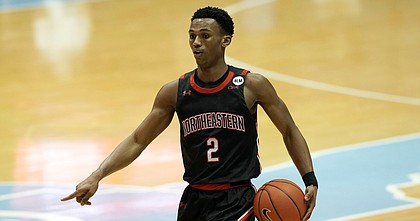 As is the case every offseason, the Kansas men’s basketball roster figures to get a facelift in the coming months.

Decisions are made, players come and go, and the 2021-22 team, which still should have a ton of familiar faces, suddenly looks different than the roster that had its season end in the second round of the NCAA Tournament on Monday night in Indianapolis.

It’s still too early to predict what that means about who stays, who leaves and what areas the Kansas coaching staff will emphasize. But a few clues are starting to surface, and KU coach Bill Self has made it crystal clear that adding scoring and athleticism will be two key components in KU’s future plans.

To that end, Stadium’s Jeff Goodman reported on Wednesday that Northeastern sophomore Tyson Walker, a 6-foot point guard from Christ The King in New York, has narrowed his list of finalists to six and that a decision would come this weekend.

Walker, who averaged 18.8 points and 4.8 assists per game this season in the Colonial Athletic Association, is down to a final six of Kansas, Maryland, Michigan State, Texas, Vanderbilt and Miami (Fla.).

If the NCAA’s one-time transfer exemption passes — as is expected — players like Walker would be eligible to play at their new school immediately, a move that could dramatically reshape the transfer scene and college recruiting as we know it.

A vote on the new transfer rule was supposed to take place in January but it was tabled temporarily. Reports have indicated that, while there is not yet a known date for the new vote, support for the rule remains strong.

Rather focusing their efforts on high school juniors or seniors, knowing they likely will have to wait a year or two for them to get comfortable at the college level, coaches can simply wait for talented, older players to enter the transfer portal and spend their time going after proven players instead of prep gambles.

Walker, who also played a year at New Hampton (N.H.) prep before getting to college, is exactly that.

While his sophomore season at Northeastern was deemed by most to be his breakout year, it’s not as if he was a nobody before that.

The Huskies went 10-9 overall this season and 8-2 in CAA play, good for second in the final league standings.

Here’s a quick look at some of Walker’s accomplishments from his freshman season:

• He ranked third in the conference in steals per game (1.8), fifth in assist to turnover ratio (1.5/1) and eighth in assists per game (3.4) and was 28th on the league’s scoring list, second among all freshmen

Because a local Santa Barbara kid played all 4 years at NE, I have watched a few games and noticed the potential of Walker early on last year. He's definitely athletic and can shoot it from anywhere as well as create his own shot or dish it off with ease.

An older version of Dajuan?

So - Lattrell out or Ochai turning pro?

Ochai has the athleticism but not the talent to make it in the league.I mean He LOOKS like an NBA two guard straight out of central casting, but...
Not even close. Now, Could he potentially still develop the tenacity and fire to score, and the skill set needed?Maybe but the door for growth is closing at this point I think

It takes practices, lots of them. It takes learning - watch lots of youtubes. It takes training. Trained with the right professional. Willingness to work hard.

If you look at how he dribbles, that's not going to attract scouts. There's no pounding, there's no swinging, no bouncing, it's too predictable. He's got a huge room of improvement.

Forget about his ability to dunk or shoot 3s. He needs to be able to create his own shots.

But if Ochai doesn’t leave to give it a shot in the league, then someone else has to go to make room for just the 3 commitments, right?

Yes, someone has to leave to open up a spot. We've got two guys at the end of the bench that Self can gently nudge out the door if necessary, plus there will likely be some transfers out (Tristan or Tyon most likely).

Tyson will likely end up at Michigan St.

We're also in on TyTy Washington who's drawn comparisons to Devonte (but 6'5") so hopefully we can lock him down.

just remembered that we said goodbye to Isaac McBride along with DeSosa this past year, so we do have enough space for the 3 incoming commits already. but we'll probably shake another loose to grab a transfer. Hate to say it because he's as die-hard red and blue as we've ever had in uniform, but it would probably be better for us if Mitch hung up his shoes.

...clear some cap space for someone new?

Correct me if I'm wrong, but I believe Seniors coming back due to COVID do not count against scholarship. So his presence isn't taking a scholarship from anyone.

is that right? - i read that somewhere but wasn't sure if was true (and was too lazy to look up on the NCAA site). In that case we do have more room to work with to bring in a couple of transfers.

According to an article I read, next season, because of COVID, teams could have 16 or 17 scholarship players on the roster, but after next season, the normal restrictions will be enforced!!

At this point, we're desperate to recruit high mobile, stud, shooters, driver, lean & tall & athletic; but I'd take this kid, even if he's not tall. He's got eyes of a tiger!!

That is correct John, any senior using their extra year won't count against the scholarship count. This includes Mitch's 6th year, Garrett's 5th year (if he decided to come back), and any senior transfer.

new senior transfers too, that's incredible. Looks like we'll have a 17 man roster next year! thanks Shannon for that tidbit. Although sadly there's better than average odds we won't be eligible for the post-season next year anyway...

The NCAA recently clarified the rule as there was much confusion and they said Senior transfers WILL count against the scholarship count (which seems like the logical solution), in-house Seniors will not.

Tyson committed to Mich St. as I said he would.