Ochai Agbaji's career-high 26 points lead No. 11 Kansas past No. 25 Oklahoma and into Big 12 semis 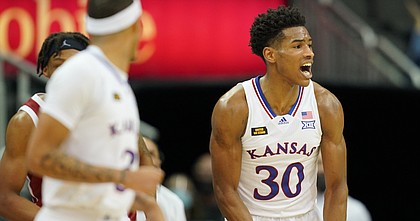 Kansas City, Mo. — By virtue of his spot in the jump circle to open Thursday’s Big 12 quarterfinal contest with No. 25 Oklahoma, Kansas junior Ochai Agbaji was immediately thrust into the spotlight on Thursday night at T-Mobile Center.

But it wasn’t until Agbaji’s red-hot stretch late in No. 11 KU’s 69-62 victory over the Sooners that he took over as the game’s most important player.

Moments after OU had trimmed what once was a 20-point KU lead down to three points with just under 7 minutes to play, Agbaji hit three consecutive 3-pointers to help Kansas (20-8) maintain its cushion and advance into Friday’s semifinals.

Those shots, all pure and all shots Agbaji sought out the minute he crossed half court, put the momentum firmly back on the Kansas bench. 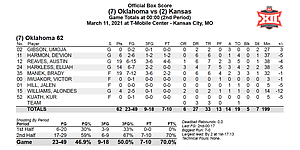 They also came shortly after Agbaji was slammed to the floor on the defensive end. While smiling while discussing the fall after the game, the mix up appeared to put a little extra juice in Agbaji’s game in real time, and he went looking to make the Sooners pay.

“I guess you could say that,” Agbaji said after the victory. “But, not really. I was just thinking next play and what I needed to do for my team.”

That line of thinking started well before the three 3-pointers. Agbaji actually followed up his fall with a hard finish at the rim that inspired him to flex and roar after the foul call. Moments later, he finished a lob on an inbounds play off of a pass from Dajuan Harris.

In all, the junior from Kansas City, Mo., finished 9-of-14 from the floor, 4-of-8 from 3-point range and hit all four free throws he attempted while helping make up for Kansas not having second-leading scorer David McCormack in the lineup because of COVID-19 protocols.

“He was special there,” Kansas coach Bill Self said of the knockout blow Agbaji delivered. “Ochai was the best that I’ve seen, for a period of time in the second half, that we’ve had in a long time.”

Agbaji, who handled the opening tip for McCormack, said he had not jumped to start a game since his senior year of high school. 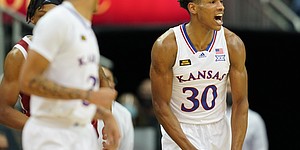 “They told me like right before the game,” he said with a laugh. “And I kind of forgot how it went. I didn't know where he was going to throw the ball. But we still got the ball so I guess I won the tip.”

For a while during Thursday’s victory, it hardly looked like the Jayhawks would even be in position to need any big baskets in the second half.

After a slow first four minutes, Kansas turned things up defensively and dominated the final 16 minutes of the half in building a 35-15 halftime lead.

Reserves Harris (4 points, 5 assists in 29 minutes) and Mitch Lightfoot (11 points, 4 rebounds in 20 minutes) played big minutes and delivered on both ends, and Agbaji and Marcus Garrett (17 points on 7-of-12 shooting, with five rebounds and four assists) were equally as problematic for the Sooners (15-10).

“We didn't make shots,” said Self, offering his only criticism of KU’s first half. “But we did everything else great. We rebounded. We defended. We shared it, turned them over.”

Harris was particularly key to KU’s stellar first half. The backup point guard swiped two steals where he just took the ball from the man he was guarding and another where he poked it away from unsuspecting OU forward Brady Manek (19 points) in the post.

He also hit a floater, finished a hard-driving layup at the rim in transition and continually worked as a ball mover to keep the floor spaced and shooters open.

“Dude, he’s everywhere,” Lightfoot said of Harris. “And he impacts everything.”

While the two sides swapped roles in Thursday’s second half, when OU outscored KU 47-34, Self was not terribly upset.

For one, KU won the game. For two, he liked that the second half forced his team to grind out another win, much the way it had to last week in a come-from-behind home victory over UTEP.

“It was a great game to win,” Self said. “Because they put real game pressure on us and we had some guys step up and make plays.

“To score 69, that's a lot of points for us, with no David and three starters going 3 for 18. So that's a positive. The negative is, obviously, we left our game at halftime.”

The victory pushed second-seeded Kansas past the 20-win mark for the 32nd consecutive season and into Friday’s semifinals, where they’ll take on third-seeded Texas, which knocked off Texas Tech, 67-66, on Thursday night in a back-and-forth game that saw both teams enjoy good-sized leads for chunks of time.

Shaka Smart's Texas squad swept the regular season series with the Jayhawks, winning by 25 at Allen Fieldhouse in early January and in overtime in Austin, Texas, last month.

Tipoff is set for 8:30 p.m., following Friday's other semifinal matchup between top-seeded Baylor and Oklahoma State.

It would have been a great win if we had kept our act together and not blown almost all of that 23-point lead. Thankfully we pulled just enough tricks out of our ass to win the game.

Let's hope smooth Ochai continue his strikes from this point on.
Garrett's spin move to the basket looks better and quicker. With Harris on the floor, Mitch all of a sudden a nifty scorer!!! This is a very entertaining game: a great D, with great O. Not a perfect one. But as Barry puts it: it's a great Win!

“The negative is, obviously, we left our game at halftime.” Self said. I think Self left his coaching in the locker room at the half. Why he stuck with the original starting lineup, which included Thompson and Braun, after Lightfoot and Harris helped key the 20 point halftime lead, was completely baffling. Did he watch the first half? Braun was a no show throughout and OU kept figuring out how to post up Manek against the smaller Thompson. Despite Self’s stubbornness, KU won when Lightfoot and Harris were on the floor. It has become clear for KU to progress, Harris should be starting and Braun coming off the bench. It will be interesting to see what Self tries against a much bigger and more athletic Texas team minus McCormack. It would be frustrating to lose three times this season to Smart and Texas (but could save Smart and potentially get him a contract extension). If foul trouble arises for Lightfoot, maybe Grant-Foster (who has all but disappeared) or even Muscadin (who apparently is not ready to play any meaningful minutes) will get a few minutes. Time will tell. Good luck Bill. Hopefully he has a complete night of coaching ahead. Rock Chalk.

Lightfoot had 11 points in only 20 minutes. Fun game to watch. Obviously the second half was not our best performance. But it's good to see KU win without DMack. Who knows what will happen in the NCAA?

I was pulling for Texas to win so we can get some retribution and here they are right here in front of us. We are out sized and will need to hit the boards hard and be sharp from the outside. Will we be zoning a lot? Go Hawks!

I am in agreement Braun did not play well against OU. However, Harris is right where he needs to be. He gives a charge of defense off the bench. You can't lose the dynamic that lineup decision provides. Mitch can't start because you have absolutely nothing behind him. If he gets early fouls, which he has a tendency to do, you've wiped out your inside game. Grant-Foster is a typical JUCO. Not ready for this year. He should be better with some more coaching. I liked what HCBS did with the lineup and strategy. Anyone notice he inverted the offense to begin the game and it caught OU off guard (no pun intended). Thompson was on the ball and Garrett was in the post with Wilson pulling Manek away from the goal. Harkness can defend on the outside, but inside is not his strength. Overall, good first game with McCormack. UT will be a much tougher out.

Braun hasn't shot it worth a s***t in over a month. huge slump. He should take a seat with Teahan at this point. too slow to guard the drive, and can't make a three to save his life = big liability right now, regardless of his demonstrated toughness.