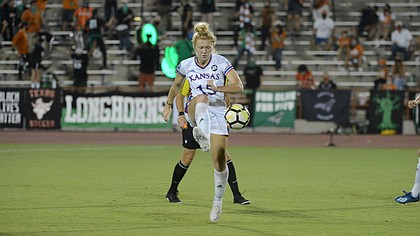 “When we recruited Ceri her ultimate goal was to graduate from KU and continue her career back in England,” Kansas head coach Mark Francis said in a news release announcing the signing. “We are excited for her that this has worked out and know she will do great things at the next level.”

Holland graduated from KU in December 2020 with a degree in exercise science.

“It’s just an honor to be representing such a big club," Holland told Liverpoolfc.com. "For them to give me this opportunity is just amazing for me and I’m really excited to get going.”

Holland is one of 14 players in Kansas soccer history to start every match in her 75-match KU career. While at KU, the West Yorkshire, England, native was a two-time all-Big 12 second team selection and a member of the Big 12 all-freshman team in 2017.

During her senior season last fall, Holland was a three-time Big 12 Offensive Player of the Week pick and tied for the Big 12 lead with three goals and three assists in KU’s nine games.

For her career, Holland finished 10th on the KU all-time shots list with 157. Her 75 consecutive starts as a Jayhawk rank fourth all-time and she also tallied 14 assists and five game-winning goals during her Kansas career.