The Jayhawks shot 5-for-18 in the final quarter and turned the ball over five times, suffering a 75-65 loss to Texas Tech after entering the fourth with the game tied.

In its third consecutive loss, KU only made 33% of its field goals on the night.

“You’re just not going to win games if you can’t shoot at least in the 40’s,” head coach Brandon Schneider said during his postgame video press conference, while lamenting Tech’s 27 points off 17 KU turnovers, as well as the Red Raiders’ 19 second-chance points off 15 offensive rebounds.

Kansas (5-5 overall, 1-3 Big 12) coughed up a turnover and missed its first four shot attempts of the fourth before Ioanna Chatzileonti willed her way to the basket inside, past Tech’s interior defense. The KU forward, playing for the first time since Dec. 29, beat a double team in the post and scored off the glass to cut KU’s deficit to 55-52, after the Red Raiders had again built a five-point cushion. 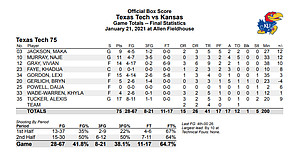 The Chatzileonti bucket propelled the Jayhawks to make three shot attempts in a row for the first — and only — time all night. Chandler Prater scored on a jumper and Julie Brosseau nailed her fourth three-pointer to tie the game at 57 with a little more than six minutes left.

The game took a turn for the Jayhawks from there, however, as the Red Raiders responded to the home team’s spurt with a game-changing 10-0 run.

KU missed nine consecutive shots and committed one turnover in a span of close to four minutes as Tech pulled away.

“We were missing a lot of shots,” said Brosseau, who led KU with 14 points. “A lot of layups or putbacks. That hurt us.”

KU entered the fourth quarter tied with Tech at 50, thanks to sophomore guard Holly Kersgieter (10 points, 3-for-15 shooting, 0-for-9 on 3-pointers) swiftly following up her own missed layup in the final seconds with an offensive rebound and putback. The heads up play allowed the Jayhawks to end the quarter on a positive note after shooting 5-for-13 in the period.

Their offense was most productive during that 10-minute stretch at the foul line, where the Jayhawks went 11-for-14. Junior guard Aniya Thomas (10 points), who also picked off a Tech pass and turned it into a layup in the third, made all four of her free throw tries in the quarter. Freshman forward Chatzileonti went 3-for-4 at the line in the third.

KU climbed out of what was a five-point deficit in the opening minutes of the second half, taking a two-point lead at the 6:07 mark when Brosseau connected on her third three-pointer.

Neither team led by more than two during the opening eight-plus minutes in a back and forth second quarter. But KU went without a successful field goal in the final 3:40 leading up to halftime, and Tech found the slightest bit of separation.

After Zakiyah Franklin scored on a layup to put KU up a point at the 3:57 mark, the Jayhawks went 0-for-5 to close the half, with two turnovers, as well.

The Red Raiders matched their largest lead of the opening half (five) on an Alexis Tucker (17 points) layup, and KU eventually headed to halftime down 32-28.

KU shot just 3-for-12 from the floor in the second quarter and 0-for-3 from 3-point range, while giving away a possession on five occasions. Five of the Jayhawks’ 11 points in the quarter came at the free throw line.

A grad transfer for KU this year, after playing previously at Maine and Utah, Brosseau gave the Jayhawks an early offensive boost. The veteran guard knocked down both of her first two 3-point attempts when she subbed in for the first time in the first quarter.

Brousseau went 3-for-4 in six minutes in the period, scoring eight consecutive points for the Jayhawks, and helping the home team play even with Tech, 17-17, in the opening quarter.

KU is scheduled to face rival Kansas State at 4 p.m. on Saturday at Allen Fieldhouse.

Schneider said after the loss that three KU post players who were on the roster earlier in the season have decided to opt out.

Brittany Franklin, Bailey Helgren and Emma Merriweather, Schneider said, will not play for the Jayhawks the remainder of this year. What’s more, the coach doesn’t expect any of them to return for the 2021-22 season. He said all three will graduate either this spring or summer.

All three players were listed at 6-5 on KU’s roster. Helgren averaged 16.1 minutes a game and played in seven games this season. Merriweather also played in seven, averaging 8.1 minutes. Franklin had only appeared in two games and played a total of 4-plus minutes.