There is something especially meaningful about finding a way to win on an off night in a conference as tough as the Big 12. That was the case for the Kansas men’s basketball team during its 63-59 victory over Oklahoma on Saturday at Allen Fieldhouse.

The Jayhawks had a stretch of eight-plus minutes without a made basket in the second half. Their best player, Jalen Wilson, didn’t hit his first shot until there was 4:40 left to play in the game.

Senior guard Marcus Garrett made a layup on a follow with 5:40 left in the game, giving KU a 51-49 advantage. It marked the first made basket by the hosts since a successful field goal by senior Mitch Lightfoot at the 14:09 mark in the second half. 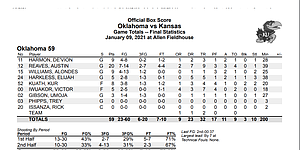 Moments later, redshirt freshman Jalen Wilson drilled a 3-pointer from the top of the key for his first successful shot of the afternoon. The Sooners still responded by grabbing a 55-54 advantage with 3:43 left to play.

The Jayhawks found a way to finish it out, however. David McCormack netted a basket with 2:19 left to give KU an advantage. Wilson knocked down another 3-pointer to create some much-needed breathing room down the stretch.

McCormack added a basket for the hosts in the final seconds. He led the team with 17 points on 8-of-14 shooting from the floor. Ochai Agbaji was the only other KU player to finish in double figures, as he ended up with 14 points.

Kansas will travel to Oklahoma State on Tuesday.

Kansas head coach Bill Self on 63-59 home win over Sooners by KUsports.com

David McCormack after leading Kansas with 17 points in 63-59 win over Oklahoma by KUsports.com

Ochai Agbaji on KU's performance in crunch time during 63-59 victory against OU by KUsports.com

This being a CBS game, I was able to livestream it on my laptop. It was such a maddening game to watch, and I yelled myself hoarse throughout the game.

Despite the final score being in Kansas' favor, I am really disappointed in the Jayhawks' overall performance. You would think that a KU team that got its ass whipped at home the week before by Texas would want to put up a better showing its next time out at home. But there were long stretches, and especially in the first half, where Kansas looked just flat-out disinterested in the proceedings. They had way too many defensive breakdowns - how many baskets did KU give up to OU on backdoor cuts? The lack of communication amongst the players is deeply concerning - where is the on-court leadership for this team?

I'm more relieved than happy for the KU victory, because, based on what I saw, the better-prepared team did not win today.

Ditto, it's frustrating to watch indeed, despite the win. We're back in the dum-dum offense play, and Lon had it figured out. One direction, weave and weave, lost so many opportunities on the other side, because the players just going on one freakin direction. So predictable. OU has better ball movement and passes. FTs bailed us out. Even with under 60% FT made.

But good to see David's progress. He can still improve - more alert to pass to the open man - Ochai was wide open under the basket a couple times, David forced to attack the basket, even well defended instead. Too bad, that fake screen-slip play by David only happened once. Need to do more of those!!!

Wilson's 3s made up for his astonishing TOs. He needs to learn how to fake. But happy to watch him go up and stuff the rim! That's a good progress, even if he failed. It's a good thing!!!

TGF has to learn to share the ball. He doesn't want to be marked as a ball hogger. It happens several times already where he lost the ball for dribbling too much. Gotta get out of that bad habit.

Refs stupid calls on daJuan are just maddening. Two imbecible calls. There was a time when he was on the court and we were scoring like 10 pts. Without Garrett. Coach has yet to figure out how to just kill opponents. This kind of win will not last. Rock Chalk!!

That was another step forward for DMac. Great offense, protected the rim well, not sure why he only had 1 rebound. JW almost had a double, double despite being out of sync most of the night. Great players do that! Its a win! On to Okie State!

OU played great defense at the free throw line. Also, we had way too many turnovers. We played fair defense. Mac had his second great game in a row, maybe he is felling it. We cannot play this poor and expect to win at OU.