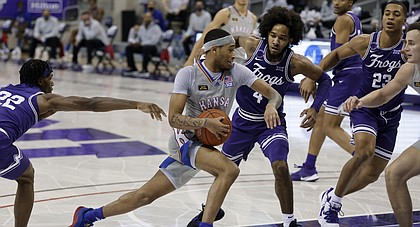 With Marcus Garrett and Bryce Thompson nursing injuries in street clothes and Ochai Agbaji dealing with an injured hamstring, the sixth-ranked Kansas men’s basketball team got all kinds of lifts from all kinds of places during Tuesday's 93-64 thrashing of TCU in Fort Worth, Texas.

“Not to be full strength and to have the guys kind of rally around that after what happened Saturday (in a loss to Texas), I thought it was terrific,” Kansas coach Bill Self said after his team’s Tuesday night victory. “I thought we played great. I'm not going to be nitpicking on anything right now.”

Agbaji wound up playing a full load and scored 19 points on 7-of-12 shooting to help pace the Jayhawks to an early lead.

But the contributions that came from beyond KU’s frontline stars was the bigger story in this one.

And David McCormack delivered what Self called a “screw it” game, pouring in 20 points on 7-of-9 shooting while adding eight rebounds and two blocks in just 23 minutes. 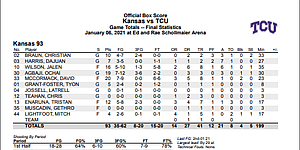 This, after McCormack was benched to start the second half of KU’s 25-point home loss to Texas last weekend.

“There's a time with everybody, when things haven't gone well, that you just finally kind of have to say screw it and just go play,” Self said. “And that's kind of the impression I got from him. I mean, he's a good player. And he hasn't played his best. But tonight was the first night that I thought he's been dominant. He was dominant tonight.”

Even after that type of showing and one of the best games of his career, McCormack was more concerned about crediting the team for its strong bounce-back victory.

After recording just 16 dunks in their first 10 games of the season, the Jayhawks delivered six on Tuesday night, including two from sophomore guard Christian Braun in the game’s first 13 minutes.

“I think we just capitalized on every opportunity,” said McCormack, who also threw down two of those six dunks. “Instead of laying it in, dunk it.”

The Jayhawks outscored TCU 21-11 the rest of the half and did not let the intermission slow their roll. 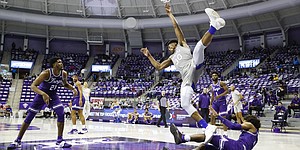 McCormack and Agbaji combined to score KU’s first 19 points of the second half and a 14-point halftime lead quickly exploded to 26 points early in the second half.

That surge left TCU helpless against a hot-shooting Kansas team that continued to get contributions from its entire lineup the entire night.

“I'm really proud of the guys,” Enaruna said Tuesday night. “We knew that the way we played on Saturday, it's not the way that we are. So we practiced hard the next (couple of) days to come out like this today.”

The energy and intensity was palpable from every player that stepped on the floor. And KU got crisp ball movement, aggressive defense and strong decisive play from its halfcourt offense, as well.

“There were a lot of good things that happened tonight that we haven't seen consistently happen,” Self said after the victory. “So hopefully that'll give us some confidence.”

Asked what he liked most about his team’s performance, McCormack pointed to the fact that the Jayhawks got key contributions from everyone who played.

“Everybody, at some point the game, got into a rhythm and got into a flow,” McCormack said. “And the ball moved. I think that was a real key, as well. Being down players, instead of depending on certain players, everybody had the opportunity to show what they can do.”

The victory tied a school record as the 11th consecutive conference road win for the Kansas program, dating back to last season, and it featured 56% shooting from the floor, a 40% clip from 3-point range a 75% showing at the free throw line.

The 1.453 points per possession (93 points in 64 possessions) was by far the team’s best this season — even better than the 1.32 mark in a recent home win against West Virginia — and also the best such mark in a road game in the Self era.

After a couple of down days the rest of the week, which Self said should be key in helping Garrett (head), Agbaji (hamstring) and Thompson (back) heal up, the Jayhawks will return to action at 3:30 p.m. Saturday against Oklahoma at Allen Fieldhouse.

Kansas coach Bill Self on what stood out in 93-64 road win over TCU by KUsports.com

David McCormack after leading Jayhawks with 20 points against Horned Frogs by KUsports.com

Tristan Enaruna on playing without Marcus Garrett and why KU was able to get more dunks by KUsports.com

Good to see Tristan break out and the whole team respond after the sky fell last weekend.

When was the last time we saw 20 assists in a game? 6 dunks without Dok? I'm very satisfied. But this is against TCU, let's keep the momentum going. Everyone seems to play with freedom. 20 by bench players. Everything went our way. Let's keep rolling, let's go Jayhawk!!!!!!

As I listened to the game with TCU, it was pretty clear to me that the Jayhawks had a lot more fire in their bellies after the Longhorns fitted them for clown suits on Saturday, and that they took to heart Coach Self's challenge, "What kind of team do you want to be?" As outrageous and historically bad as KU's loss to UT was, I think this TCU game indicates that Kansas should still be part of the conversation for a Big 12 championship.

Good to see McCormack have a break out game and just play with reckless abandon. Braun continues to surprise all of us with what he can do on the offensive side of the ball.

Great to see DMac come on strong. We need that every game if we are to challenge Baylor and Texas. Our domination of the boards carried the day, along with few turnovers and great shooting. Keep it up Jayhawks!

Got to thinking that one aspect of the game that seems to have been overlooked is the non factor that 2 of 3 best frogs were during the game. Samuels and Miles were both massively below their season averages and even 0-fers in some stats.