Pending might be the best way to describe the Kansas football program’s current quarterback situation, leading up to the start of spring practices in late March.

Now that the QB group has a new position coach — Mike DeBord, Les Miles’ latest offensive coordinator — the starting job for 2021 could end up going to any number of the contenders, depending on how everything plays out.

After starting in six of KU’s nine games in 2020, Jalon Daniels would appear to remain the favorite. But with Miles Kendrick back and freshman QBs Conrad Hawley and Ben Easters already on campus and able to train and practice this semester, DeBord and Miles will have choices.

When asked during his introductory press conference in early February about his expectations for the QB spot, which lacked a definitive returning starter after both Daniels and Kendrick encountered issues in KU’s struggling offense this past season, DeBord indicated no one should be making any assumptions.

“I’m not going to speak for Les, but I’m sure just knowing Les, every position is up for competition,” DeBord replied, when asked about the starting QB job.

“You compete to get better. You compete to be the first string guy. I wouldn’t see that any different at any position,” he added. “I don’t care if you’re a three-year starter, or a two-year starter or what, you’ve got to compete to win your job.”

As a true freshman, Daniels ended up leading KU in completions (76), pass attempts (152) and passing yards (718). But he didn’t solidify himself as the clearcut returning starting QB.

While he did start six times for the 0-9 Jayhawks, Daniels got hurt early in his second career start against Oklahoma State, and was replaced by Kendrick midway through the TCU game in December. So those six starts equate to roughly four and a half games. 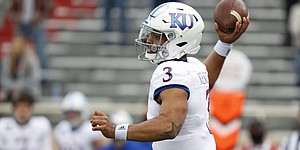 Kansas' Miles Kendrick (3) passes the ball during the first half of an NCAA college ...

Kendrick overtook Daniels as the starter for what turned out to be KU’s finale at Texas Tech, before a rescheduled meeting with Texas got canceled due to a COVID-19 outbreak with the Longhorns.

Who would’ve started at QB for KU versus UT? Who knows.

While both of the Jayhawks’ primary QBs in 2020 encountered problems behind a dysfunctional offensive line, Daniels only had one touchdown among his 152 throws and got picked off four times. (Daniels did run for three TDs, which led the team.)

Kendrick completed 60.8% of his passes, compared to Daniels’ 50% mark, while both QBs appeared in seven games. Kendrick went 73-for-120 through the air, contributing six of KU’s seven passing TDs on the season. He also threw five interceptions.

Neither Hawley nor Easters, of course, are proven yet at the college level. Hawley, from Ray-Pec High in Missouri, helped his team win the 2020 Class 6 state title and threw for 2,722 yards and 26 TDs during his final prep season. Easters passed for 1,842 yards and 13 touchdowns during his senior season at Brownsburg, in Indiana.

DeBord said he and Miles would talk more about the QB job in the weeks leading up to the start of spring practices, as they planned to have greater in-depth conversations about the team’s personnel.

“I just know Coach Miles is all about competing to win,” DeBord said, “and I’m sure that’s the way it is.”

For the 100th straight year, we don’t know who the QB is.

We committed to Stanley. We actually competed.

And what happened the following year?

DeBord: you took the job and the paycheck. Figure it out. Correctly. Early. It’s actually what you get paid to do.

With Spring practice not even starting yet and two high schoolers in the equation it would be very difficult to "figure it out" "early." I prefer they do a thorough job of figuring it out. I don't want it to drag clear to the opening game but if that's what it takes to get it right....

Given the o-line lack of effectiveness this past season I don't see how we can pass judgment on either Daniels or Kendrick. After all, we all saw what happened to Mahomes in a similar o-line situation...

IIRC - Part of the challenge this past year had to do with players getting injured early in the season. But maybe it was just the coach’s indecisiveness.

There seemed to be this great clamor for Daniels to be the guy, but there’s no way a program is going to be successful with a coin flip completion %. The minimum, minimum has got to be 60%, and there’s little reason to settle on anyone if they aren’t at least getting 60%. Some of that is on the receiving end but that’s filmable.

A little of that may be on the receiving end, and certainly Daniels bore some responsibility for his poor completion percentage, but I would argue that the terrible OL play was by FAR the main reason for that percentage.

As Dale said, you can't really judge either Daniels or Kendrick until you see what they can do with at least a DECENT offensive line. The line doesn't have to be great, but being able to provide at least basic pass protection would be a nice start ...

How many times has this headline been used over the past 12 years?

Whatever the excuse, Daniels at the controls was a catastrophe. For example: instead of throwing the ball into the stands, he would take a fifteen-yard sack. That was his bread-and-butter play. Is it possible he will look better with a veteran OC? It’s a definite maybe.

Without an adequate, not great, not good, just adquate o-line, it makes no difference who the qb is. All of us have looked too long for the miracle working qb, and we got one a few years back when Mangino was coaching, but the difference is that that qb had an adequate, at times even good o-line. Carter Stanley set records, once someone actually let him play, but he also had a better offensive line.

Once a young qb is thrown to the wolves, 90% of the time, they will try do the impossible, and their play discipline breaks down, bad habits are created that are very hard to correct.

We need to improve the offensive line, and talk about adjusting to your players, determine, what the hell, the o-line is at least adequate at doing, and tailor the offense more to that. We actually have pretty decent skill-position running backs and receivers, but the o-line is the key to everything, "it's the o-line, stupid!'"