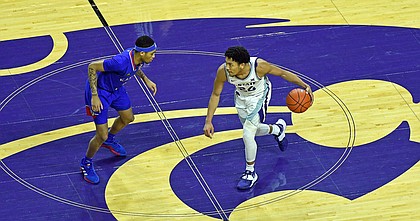 The defense was good, the offense was good enough and the result was more or less what No. 23 Kansas wanted — a 59-41 victory over Sunflower State rival Kansas State in Manhattan on Wednesday night.

The win — KU’s fourth in a row and the 13th straight loss by K-State — was the result of the Jayhawks continuing to keep their emphasis on the defensive end above everything else.

“I think what our team is understanding is we need to guard like all games will be these types of games because we can labor to score so much,” Kansas coach Bill Self said after the Jayahwks’ victory at Bramlage Coliseum. “Even though it doesn’t maybe look as as pleasing (when you’re) watching it, (winning that way is) something our team has to buy into. And if we do that then we can be in the game the last five minutes against the best teams.”

That was the position the Wildcats hoped to be in on Wednesday night. But it was evident early on that Bruce Weber’s team would have no such luck.

Although K-State hung around for a while in the first half because of KU’s inability to find its own flow on offense, Weber’s team did nothing to show that it was ready to score enough to win the game, a struggle that has plagued the Wildcats all season.

The 41 points allowed by Kansas marked the second lowest by a Big 12 opponent against a Self team, second only to KU’s 39-point suffocation of Nebraska in 2007.

And the Wildcats shot 31% from the floor while making just three of 24 shots from 3-point range.

K-State’s first 3-point make did not come until the 11:30 mark of the second half. The Wildcats were 0-for-15 up to that point. And the home team’s final two triples came in the game’s final minute, after both teams had emptied their benches.

“I think it (was) probably one of the best games of us guarding the 3,” said KU guard Jalen Wilson, who finished with 11 points and nine rebounds, one board shy of his fifth consecutive double-double. “I think our defense (played) real well. We definitely can always improve, but we’ve been playing for each other a lot on defense lately.” 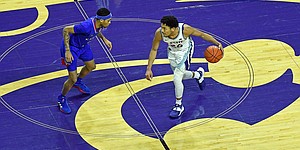 For much of the first half, when the Jayhawks (16-7 overall, 10-5 Big 12) built a 26-17 lead heading into halftime, that defensive performance played out right in front of the Kansas bench. That allowed KU’s coaches to put their intensity into helping the Jayhawks deliver the kind of effort and energy they wanted to see.

That set the tone in the first 20 minutes and it carried over into the second half on the other end of the gym, where the Jayhawks used their defense to create offense that helped them turn the final 10 minutes into a track meet.

“I thought we guarded well,” Self said. “You know, they missed some open looks. Let’s not get too carried away. But they had 35 with one minute left, and we didn’t guard them the last minute. But I was pleased.”

Kansas forced 18 K-State turnovers and scored nearly half of their points (29) off of those KSU gaffes.

“That’s what I try to tell them, ‘Let’s get out and run and try to get steals and deflections,’” senior guard Marcus Garrett said after the victory. “That makes easy offense.”

Despite the lopsided outcome — KU’s largest lead was 24 points with 1:50 to play — K-State (5-18, 1-13) had the deficit at just four points (30-26) with 14 minutes to play after a block of a dunk attempt by Mitch Lightfoot by Kaosi Ezeagu turned into a quick K-State jumper on the other end.

But Lightfoot (four points and three rebounds in 14 minutes) atoned for the miss on the next possession, posting Ezeagu up and hitting a soft hook over him to put Kansas back up six.

One possession later — after yet another K-State miss — Kansas freshman Bryce Thompson scored his second of three second-half buckets, knifing his way to the rim for a silky smooth layup that put KU ahead 34-26 with 12:49 to play.

Soon thereafter, the Jayahwks’ lead grew to 10 after a transition layup by Ochai Agbaji that came from a Dajuan Harris steal.

That stretch proved to be the one Kansas needed to pull away. The unofficial knockout blow came when the Jayhawks got an alley-oop from Thompson to McCormack and a steal and layup in transition from Christian Braun to go up 44-29 with 9:25 to play.

“(They were) great,” Wilson said of the KU bench. “’Juan and Bryce definitely stepped up for us. They hit some tough shots and made some tough plays on defense and those are the little things that we definitely need from them to win games.”

Added Garrett of the KU bench: “They came in and gave us the spark we needed.” 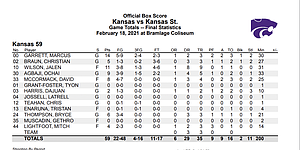 Thompson’s offensive skills, both as a scorer and as a key part of KU’s ball and body movement, played a big role in KU finding better offensive flow in the second half.

And Harris, who Self said still needs to look to score more, did his thing defensively and also put pressure on the defense with his vision every time he had the ball.

Self stopped short of saying he had reached the point where he expected that kind of production night in night out from the KU reserves. But he noted that the Jayhawks are “a different team when we can rest those starters a little.”

KU’s starting five averaged just 29 minutes per player on Wednesday, with Agbaji topping out at 33 minutes and Wilson playing just 25.

Although it might not have been as pretty as some of KU’s victories this season, Wednesday’s victory, and the defensive effort that accompanied it, added another layer to the Jayhawks’ growing confidence.

KU now has more conference wins than any other Big 12 team — the pandemic has created some uneven scheduling — and the Jayhawks are playing with as much confidence as they’ve had at any point this season.

Next up, Kansas will play host to No. 15 Texas Tech at 1 p.m. Saturday at Allen Fieldhouse.

Kansas coach Bill Self on what stood out in 59-41 win over Kansas State by KUsports.com

Senior Marcus Garrett after leading Jayhawks with 14 points in win over Wildcats by KUsports.com

Jalen Wilson on importance of KU's bench in rivalry win over KSU by KUsports.com

2] I just read the NCAA rules...it is possible that this entire KU team, no matter what year they are in, can return next year. Do we want that?

3] I am a good lip reader but I couldn't decipher what "magic" word that was uttered by Brucie Boy!

4] The KSU cheerleaders had the most boring outfits I have ever seen. [Unless they were going commando :) ].

5] Ochai had better be better Saturday.

6] I have total faith in Coach Scott Drew that he will find a way to screw up Baylor's season.

7] Here in St. Louis we kept getting disconnected by ESPN+. However, the announcers were OK compared to previous pairings.

does anyone else have Juan Dixon flashbacks when the call dj harris that? *chills* better get used to it tho! rcjh

Numbers don't lie, but eyes don't lie either. It seems our defense won it, but watching they were able to sneak in, a few dunks here & there, constantly missed uncontested 3pts - KSU is just the worst of the two teams in offense . Their defense sure made us look bad on offense, too. Until the last 7-8 minutes of 2nd half we managed to launch 3s and penetration. We are good enough to enter the tourney, that's all I care at this point.

2nd place and most wins in the conference. Not bad for an off year.

-This is the longest losing streak for KState in 93 years.

-When Bruce Weber got the technical, it was like he was toddler put in time out. He put his mask on and hyperventilated on camera for 20 seconds, sucking his mask practically down his throat. It was weird. The technical was also odd. That particular ref was a lot more free with the whistle than the other two.

-KSU scored their fewest points in Bramlage...ever. They have played there for 33 years. Let that sink in.

-The ESPN+ announcers were ok this time. But every once in a while, they would switch to a camera on the opposite side of the court. It changed the perspective on which way the players were going and was really weird. I've never seen that done before. I hope that ends.

-KU continues to be a team that plays at the level of our opponents, at least on offense. Fortunately, defense and the "make the other team play bad" strategy will win games.

-KState players kept slapping the floor on defense. That's great that they were amped up, but it was super annoying. The floor slap, which has its origins in Duke, needs to go away. Notice how you never see a pro int he NBA slap the floor? Save your energy for actually guarding, not beating up a defenseless piece of wood.

-Once again, KSU is not a rival of KU in any meaningful way. We share the same State, and that's about it. There is nothing else, besides proximity, that contributes to a rivalry. Until 2008, we had a 24 year (I believe) win streak in THEIR arena. There were literally grown adults drinking beer around Lawrence that had never, in their life, see KU lose at KSU in men's basketball.

-Ahem. Let's make sure we call it the correct name (please hear my sarcasm). It's not the "Sunflower Showdown", it's "The Dillon’s Sunflower Showdown". In 2010, Dillons bought the naming rights and the series was re-branded. (Once again, this rivalry does not exist but is propped up by corporations who want to make it happen).

I would love to see Bruce Weber get ejected someday, like Jim Wooldridge (AKA Bill Clinton's long-lost twin brother) did when he was ejected from a KU-KSU game in Manhattan in 2002.