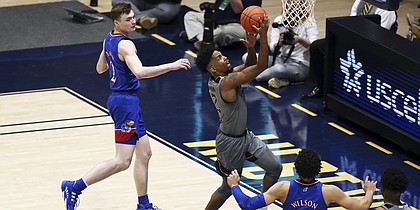 Non-existent defense and another poor start on Saturday led to another loss for No. 23 Kansas, which fell to No. 17 West Virginia, 91-79 at WVU Coliseum in Morgantown.

Despite starting with good energy and playing what Kansas coach Bill Self called “about perfect” on offense to open the game, the Jayhawks fell in a 12-2 hole because of their lack of defensive pressure and their inability to hit shots at close range.

“The game was not lost in the first four minutes,” Self said. “But we had to expend so much energy (to get back into it) and play starters a long time and it put extra pressure on them. It put us in a position where we had to be more perfect than what we were.”

KU’s offense eventually did get going. The Jayhawks followed up that 1-of-8 start by hitting 12 of their next 20 shots heading into halftime.

The problem was, they did nothing to keep West Virginia from doing the same. The Mountaineers scored 44 points in the first half and followed that up with a 47-point second-half, which KU made interesting for a while until running out of gas.

“Defense should travel,” Self said after the loss. “And it hasn’t been.”

Several of KU’s early misses were from point-blank range, with David McCormack (17 points and nine rebounds) missing a couple of put-backs in the paint and Marcus Garrett missing a breakout layup after getting tied up on whether to lay it in or dunk it.

Christian Braun and Dajuan Harris also missed baskets right at the rim in the first half, keeping KU from gaining any kind of offensive rhythm or momentum. 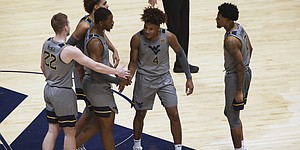 “Even though we probably deserved to be behind at halftime, that should have been a two- or four-point game,” Self said of the 44-34 deficit at the break. “And we just didn't convert. I don’t know if I've ever seen a team, in one half, have two uncontested layups with nobody around them and come away empty.”

Added Jalen Wilson (16 points, 14 rebounds in 40 minutes) of the close misses: “Those buckets, we have to execute them. We had a lot of good looks, easy looks, and they just bounced out. That’s a part of the game and its bound to happen, but if we’re not going to hit those we have to make sure we play better on the defensive end.”

After trailing by 10 at the break, the Jayhawks unleashed an entirely new brand of basketball on the Mountaineers to open the second half. Kansas jumped into passing lanes and pressured the ball all over the floor. And the Jayhawks followed that up by hitting their first six field goal attempts of the second half, many of them coming in transition as the result of that increased defensive intensity.

KU had the game tied at 47 just 2:07 into the second half and again at 51-all a few minutes later. But West Virginia’s Miles McBride’s 3-pointer with 14:18 to play put the Mountaineers up 54-51 and KU never tied the game again after that.

McBride led all scorers with 29 points on Saturday and teammate Taz Sherman chipped in with 25. The two combined to hit eight of 12 shots from 3-point range while shooting 17-of-32 from the floor overall.

“I’m sure it's happened, where other players had big games,” Self said. “But usually it's a Michael Beasley (of Kansas State) or an Arthur Johnson (of Missouri) and they're throwing it inside and whipping our (butt) that way. But we usually don't have guards go whip us, and that's what happened with those two tonight.”

After surrendering 16 3-point makes to KU in the first meeting between the two teams in December, the Mountaineers held KU to seven 3-point makes (on 20 attempts) on Saturday while draining 11 of 21 of their own. 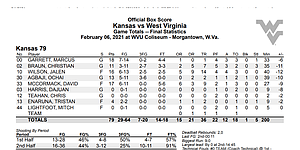 KU’s defensive struggles on Saturday seemed to weigh heaviest on Self’s mind after the game, and that issue far outweighed any positives that came on the offensive end.

“Nobody guarded,” Self said. “And that includes Jalen, Marcus, Ochai (Agbaji), David, Christian, Tristan (Enaruna). It doesn’t make any difference. Nobody guarded.”

Saturday’s loss was KU’s fifth consecutive away from home. You have to go back to the 1982-83 season to find a stat like that.

All five of those road defeats have come at the hands of Quadrant 1 teams in the NCAA’s NET rankings. And all seven of KU’s total losses this season have been of the Quadrant 1 variety, with five of them coming to ranked teams.

While that paints the picture of KU not having suffered any bad losses, Self said that consolation did not mean much because the Jayhawks were so rarely competitive down the stretch in most of their setbacks.

Added Braun, when asked after the game about the team’s mindset moving forward: “I think everyone’s head is in a good spot, but we just have to do it on the court. We have to stop talking about it and actually be about it.”

The Jayhawks face a quick turnaround for their next game, which comes at 8 p.m. Monday night against Oklahoma State at Allen Fieldhouse.

And, in many ways, they appeared to have moved on to that one shortly after Saturday’s loss went final.

“In basketball, you sometimes have to focus on what’s in front of you and not think about the past and what you could’ve done,” Wilson said. “Another day, another game. We just have to focus on competing.”

Kansas coach Bill Self on what went wrong in 91-79 road loss to West Virginia by KUsports.com

WVU progressed so much since last time we beat them. Give them credit. They play better ball, coached better and has a lot more weapons than we do (plus those stupid calls), that's just facts - we, on the other hand, are travelling down the hill fast.

No matter how much coach whining about our team's defense. Don't you realize they even beat TTU - a better, if not the best, defensive team in B12. We just need to make those baskets and play better together. Offensive wise, I think we executed better today, it's just when missing those shots - we're not going to win. Same case if we keep missing those bunnies, missing opportunities to throw lobs, unforced TOs. Make every basket count, then let's talk again comes March. Here's to better and better OFFENSE!!!!!!!!!!!!!!!!!!!!!!! Rock Chalk!

I am not a person to criticize our players but I bet McCormack shoots about the same percentage from 8+ feet out as he does under the hoop. He either gets the ball in great position on the feed or he grabs a rebound right under the basket and just spazzes out and misses the bunny. There is such a fine line between him playing with energy and playing line a spaz. Easily missed 8 points on bunnies today, plus of any of those could have turned into an ‘and one’.

Self has shown over the past several years he can no longer recruit kids at the level of talent it takes to win the Nig 12. Especiialy without the help of a shoe company.

1] For all you posters, with all due respect, who questioned my position last week that KU would be fortunate to go 4-4 for the last part of the season as opposed to the 6-2 record you felt was within our grasp...please point out 6 wins for me.

3] This season is being tough to watch but compared to what next season may be like under NCAA probation, maybe we just better enjoy it as best as we can.

4] Well, KU did score a lot with five starters in double figures.....that's something isn't it?

Actually coach has done a decent job with this bunch. Fact is we have no weapons that really threaten our oppoents on offense, and we are one of the worst defensive teams we have had in recent memory.

We actually played a better offfensive game today, but our defense was sorely lacking.
As bad as we are on offense, it is our defense that really let's us down.

We either make shots or we lose. It's that simple.

This is the first time in a long long I'm not excited about the tournament .Last years team may not have won .....who knows ...but there was still that hope that we might have....

This is a poor team. Players cannot sustain their effort for forty minutes. Coach Self has not developed schemes to fit these players strengths. It will be a cold winter in Allen Fieldhouse.

Ochai, this is now your team!

Didnt know if Rodneys reply was to my comment ,but let me clarify it . We had a great team at 28-3 last year and would have been number 1 overall seed ,we have lost in the tournament with better KU teams than last years team .........so a National Championship wasnt a given .and because the tournament wasnt played we will never know.if we would have won ........That said... this team only makes you look forward to next years team

Mallory, I'm with you. I thought last year's team had as good a shot at the NC as any team we've had in awhile. This years team is a product of the evolution of team chemistry....with the loss of three contributing seniors and an anticipated big man off the bench, maybe this down season should not have been a surprise. I guess we have been spoiled. Looks like no KU, Duke, UNC, UK Michigan State or UCLA in the Top 25 this week!!!!

Really bad unforced turnovers, incredible misses of numerous layups, missed threes, and porous defense. Sadly, we don’t have any great offensive weapons, i.e., guys who can flat out score, carry the team, get downhill, etc. We have no rim protection, and for that matter, no real point guard (though Marcus is a great player). Hate to say it, but we don’t have the talent level to get behind by 10 points every night in the Big 12 and hope to win. Hard to be optimistic about next year—don’t we have the same guys back?

How do we not defend Culver for going for his left hand? If we are not going to double team him, then it's a must to overplay him and make him go where its not comfortable.
I actually like what Self has done in regards to going easy on the guys at a time when life is not all that enjoyable, but we have no team chemistry nor love for each other. Got to hold the HC responsible for getting them to buy in for the sake of the team on both ends of the floor as well as off.