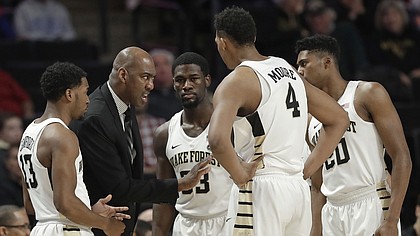 One former Kansas basketball player, Mark Turgeon, is out as Maryland’s head men’s basketball coach, and a Jayhawk great, Danny Manning, will step in.

Maryland’s athletic department announced Friday, after a slow start to Turgeon’s 11th season knocked the team out of the top 25, that Turgeon was stepping down in what was called a mutual decision.

An assistant on the staff, Manning was made interim head coach for the rest of the season.

“After a series of conversations with Coach Turgeon, we agreed that a coaching change was the best move for Coach Turgeon and for the Maryland men’s basketball program,” Maryland Athletic Director Damon Evans said in a statement. “He has dedicated over a decade of his life to the University of Maryland, and has coached with distinction and honor."

The Terrapins won at least 23 games in five of the past seven seasons, but Maryland has reached the Sweet 16 just once under Turgeon and hasn’t gone further. The Terps began this season ranked, but a loss at home to Virginia Tech on Wednesday night dropped them to 5-3 on the season.

“After several in-depth conversations with Damon, I have decided that the best thing for Maryland basketball, myself and my family is to step down, effective immediately, as the head coach of Maryland basketball,” Turgeon said. “I have always preached that Maryland basketball is bigger than any one individual. My departure will enable a new voice to guide the team moving forward."

Turgeon went 226-116 at Maryland and is 476-275 overall as a head coach. He coached at Jacksonville State, Wichita State and Texas A & M before being hired to take over the Terrapins.

“Maryland basketball has been my passion and focus for the last 10 seasons, and I am extremely proud of what we have accomplished," Turgeon said. "It is through the combined effort and commitment from our coaches and players, both past and present, that we have sustained consistent success in a sport that is ultra-competitive. ... It has truly been an honor to be the men’s basketball coach at the University of Maryland.”

Manning, who led Kansas to the 1988 NCAA title as a player, spent six years as the head coach at Wake Forest before joining the Terps as an assistant this season. Manning and Turgeon played three seasons together at Kansas.

Manning also was the head coach at Tulsa before taking over the Wake Forest program. Manning has a 116-140 record as a head coach. He led Wake Forest to an NCAA Tournament appearance in 2017, and also made one March Madness appearance with Tulsa, in 2014.

Maryland said a national search for the next coach will begin after the season.

Now watch them struggle to win 17 games per season.

The Maryland AD is an Idiot to break up Mark+Danny prematurely.

Does anybody else feel like Turg’s comments seemed “polite talk” for “We had a big fight and things were said. I quit and feel good to be out?”

That makes total sense. That entire Iona game I kept thinking, "Some college is going to take a chance on him again, I wonder who it will be."

Maryland is perfect. Locked into slightly over mediocre, football is not pulling the athletic budget their way, they need basketball to have a resurgence.

Agreed. Look at our last three: Brown; Williams; Self.....if that ain't the gold standard, what is?? 38 straight years of stability & quality.

Roy Williams was a gamble, no doubt, but not as much as you'd think. Not when Dean Smith made a special trip to Lawrence to lobby for KU to give Williams a chance. It was still a gamble, but an educated one.

Congratulations to Danny all the best to you at Maryland . And before we put Rick Pitino in the hat for the Maryland job can we a least give Danny a chance to coach this team

Rick Pitino is a nasty mess. Look what he did to Louisville. Maryland should look elsewhere.