Though the Kansas football team registered just one victory during Big 12 play in 2021, the conference’s coaches didn’t overlook two of the Jayhawks’ most impactful players when making all-league selections.

A fifth-year defender for KU who bounced around between different positions earlier in his career, Johnson stood out in his final season, after defensive coordinator Brian Borland arrived and asked Johnson to be an edge rusher.

The 6-foot-1, 235-pound veteran led KU with 8.5 tackles for loss, 6.5 sacks and 10 quarterback hurries. Johnson’s four forced fumbles on the year ranked third among all Big 12 players. His 61 total tackles were a career high. 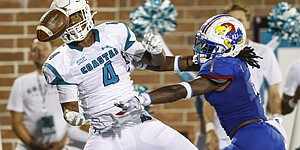 In just his second season as a starting defensive back in KU’s secondary, Logan became the Big 12’s leading tackler, finishing the year with 113 total tackles, which leads all FBS defensive backs. The 6-foot, 205-pound safety from St. Augustine, Fla., was so important to KU’s defense that he was in on 15% of the 763 total tackles the Jayhawks made in 2021.

Logan had a career-best 15 total tackles in KU’s narrow loss at TCU in late November, and he averaged 13.3 tackles per game over the final three weeks, coinciding with KU’s best stretch as a team in Lance Leipold’s debut season as head coach.

Additionally, KU had six players receive honorable mention in the all-league process, with postseason honors being voted on by the Big 12’s 10 head coaches, who are not permitted to vote for their own players. 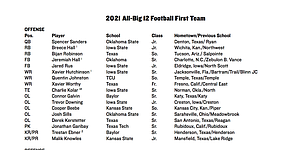 Another transfer from UB, junior linebacker Rich Miller, received honorable mention in the defensive newcomer of the year voting.

Logan also appeared on the honorable mention list, from the defensive player of the year voting.

DEFENSIVE NEWCOMER OF THE YEAR: Siaki Ika, Baylor, DL, So.