No pressure: KU volleyball upsets No. 19 Oregon to reach 2nd round of NCAA Tournament

Whatever pressure that is supposed to go hand in hand with playing in the NCAA Tournament was nearly nonexistent for the Kansas volleyball team Thursday, as the Jayhawks swept their way to the second round with a three-set upset victory over No. 19-ranked Oregon, in Omaha, Neb.

Even though KU was making its first postseason appearance since 2017, sophomore middle blocker Caroline Crawford said the Jayhawks arrived at D.J. Sokol Arena “super-confident” in each other, making the 25-21, 25-21, 25-22 victory possible.

Teams like the Jayhawks (17-11) that have young players or lack NCAA Tournament experience may come in “kind of frazzled” or with “unsettling vibes,” Crawford said during a postgame video interview.

“I didn’t feel that once — not during the match, not before the match,” she added. 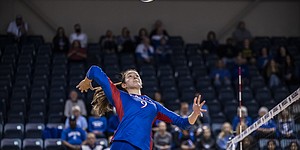 KU freshman outside hitter Caroline Bien said facing the Ducks (22-9) came with a little more scouting due to the players’ lack of familiarity with their Pac-12 opponents, but she thought the Jayhawks were so accustomed to facing high-level players and teams in the Big 12 that taking on Oregon didn’t seem like anything out of the ordinary.

Bien pointed to the team’s “business as usual” approach as a key to getting the program to the tournament’s second round, a feat KU hadn’t pulled off since 2016.

“Obviously it’s not just another game, but we kind of had that mindset going into it,” Bien explained.

The Jayhawks looked and played loose against Oregon, which entered the matchup as the favorite. KU head coach Ray Bechard figured his players were able to evade any elements of pressure and lean into a free and easy approach, because the Jayhawks already had experienced the stress of feeling like they had to finish the regular season with four consecutive wins just to secure a postseason invitation.

“Why would we worry about any pressure in this situation?” Bechard said of the message entering the first-round match versus Oregon. “Go enjoy it. Very few teams get to experience this. So don’t go a moment without a smile for a teammate or over-communicating, all those things. I just think the vibe has been so good, ever since we saw our name come up on the board (on the NCAA Tournament selection show). They were not going to let this opportunity go by without creating our best case scenario and our best effort.”

Indeed, Bien, Crawford and Jenny Mosser came out delivering kills and avoiding many errors during the first two sets, as the Jayhawks applied pressure and put the favored Ducks in a 2-0 hole to open the tournament.

And when Oregon looked to form a rally in the third set, the Jayhawks responded out of a timeout, just after the Ducks cut KU’s lead to 17-16.

KU answered with four straight points, including two Bien kills and an ace from junior Kennedy Farris. Bechard said he was “really proud” of his team’s play.

“I think we’ve got a team that’s obviously peaking at the right time. The last couple of weeks in the Big 12 obviously has given us some momentum,” Bechard said. “We’ve got a really young team out there competing against an Oregon team that's very mature and very experienced. So it was it was a joy to watch.” 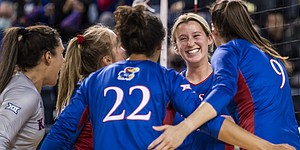 Kansas volleyball players, including outside hitter Caroline Bien (smiling), celebrate after a point during the ...

Crawford credited KU’s coaching staff for having a strong scouting report and the players’ attention to detail served them well.

“I think on top of that, this group is just so close,” Crawford added. “And that closeness comes from trust off the court. So when you’re in crucial moments, it just comes down to trusting your teammates.”

“We play better when we’re all having a good time, trusting each other. And when we’re up tight, everything goes wrong,” Turner said. “So we were all so confident in each other that we just played our game.”

And Turner's faith in Crawford and Bien was on display throughout the win, with many of her 30 assists setting up those two teammates.

“Oh, I knew if I were to give them the ball, that they would put it away — which is how it has been all season, but tonight you can just really feel like the energy,” Turner said.

The first-round win set up a Friday night matchup (7 p.m., ESPN+) with host Creighton. The Bluejays (31-3) are the tournament’s No. 14 overall seed.

The winner of Friday’s second round match in Omaha will advance to the Sweet 16. KU hasn’t moved on to the tournament’s second weekend since 2015.

Awesome! They said they felt "super confident" going in. Apparently the confidence was warranted. Keep on Rock Chalkin', ladies!

Really proud of this group of players and the coaches for not giving up on this season when that would have been the easy thing to do 4 weeks ago. Now we need to keep competing and not become satisfied with what we've accomplished so far.

We can beat Creighton if we are locked in like we were this evening. If we're not they might embarrass us because Creighton is very sound and doesn't make many mistakes.

I watches until I saw the support staff wearing Black Lives Matter shirts on the sidelines.

I hope the team does well, but I won't watch any of it.