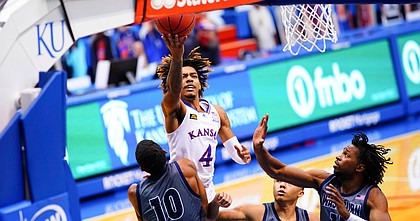 The Kansas men’s basketball program lost another player to the transfer portal on Thursday, when freshman guard Latrell Jossell decided to explore other options.

Jossell, a former 3-star prospect from Texas, who joined the program last summer, played in 10 games for Kansas during his lone season with the team and was hampered by injuries at both the start and end of his time as a Jayhawk.

KU coach Bill Self said he and Jossell visited a few times during the past few days and Jossell made the decision to look for more playing time elsewhere.

“Latrell is very popular with our staff and teammates and we all wish him the best at his next stop,” Self said. “He’ll do great.”

Jossell becomes the fourth member of the 2020-21 roster to enter the portal. He joins Tyon Grant-Foster, Tristan Enaruna and Gethro Muscadin in electing to look for a fresh start and bigger role somewhere else.

None of the four players have made a decision about their next school yet, and Jossell’s departure opens up another scholarship for Self to fill this offseason, perhaps through the portal or through typical high school recruiting channels.

Self's program remains in pursuit of prep guard Ty Ty Washington, a top-40 prospect from Phoenix, who backed out of a commitment to Creighton earlier this spring.

The Jayhawks also have had contact with Creighton transfer Christian Bishop, a 6-foot-7, 220-pound junior from Lee’s Summit, Mo., who, be-cause of the extra year of eligibility brought about by COVID, will have two years of college eligibility remaining wherever he elects to transfer.

I say this with no snark, no cruel intentions or meaning to be mean:

I swear to God that I do not recall hearing his name even once.

LJ saw the handwriting on the wall. First, he had to beat out Harris and now here comes Pettiford and Yasufe!

Yesterday, it was mentioned that the Jayhawks are over limits on Scholarships by one player. Today, it's revealed as to who else is leaving the program.

Now, the Jayhawks are back at 13 (allowed) Athletic Scholarships for their Men's Basketball program.

I believe that as the count currently stands, the Jayhawks are at 12+Mitch.

Mitch and Marcus could both return and not count against the scholarship limit due to the Covid allowance.

Jossell's departure I think frees a roster spot that could be used to add yet another newcomer, to bring KU back up to the limit of 13

My understanding, Mitch is on Scholarship. So, he would officially count as the 13th player (unless, he's no longer on scholarship).

Based on what I just said, I don't see there is any more available scholarships (for any future addition, unless someone else leaves the Jayhawk's bench).

returning players (none of these players, as far as I know, have made any announcement yet regard testing/entering the draft or intentions to return):
Ochai Agbaji,
Jalen Wilson,
David McCormack,
Bryce Thompson,
Christian Braun,
Dajaun Harris,

Gavin, Latrell mainly played at the end of games that were deemed out of hand. He is appeared to be an excellent shooter and a solid point guard and will likely do well if given a chance to play elsewhere.

Apparently Self has another recruit ready to commit and he needed (as speculated) another scholarship. The cold reality is scholarships are awarded for one year and must be renewed by the head coach. Unfortunately Self apparently does not believe that some of his previous recruits have the athletic talent to compete at the highest level. The transfer portal has become college’s version of free agency and a way for coaches to recruit more polished players from other programs. Hopefully Self will still stick with at least some of his less ballyhooed recruits and actually develop them (e.g., Mason, Graham, Svi, Garrett, etc.) and not get into the one and done approach, but this time via the transfer portal.

So far, I do not see that Aidoo's interest in Kansas has increased. Course, I'm relying on 24/7 Website for that information. So, who knows....

That's what I've been wondering for week now. With no disparagement at all for the how we've done with shuffling some of the perimeter pieces, an explosive 7-footer with a 7'5 wingspan is a relative unicorn in the talent pool, and landing him would be the most significant addition of the group. Doesn't look promising but still hoping for it.

Andy Godwin, Garrett was the Gatorade POY in Texas

Andy hits the nail on the head.

Joseph, Mitch was the Gatorade POY in Arizona.

As always, I’d prefer that we actually pretend to be a university. Recruit kids who want to play collegiate basketball, earn degrees and, maybe play professionally. In that order.

In regards to the transfer portal, good for the kids. Coaches lie. Coaches cheat. Coaches leave. Maybe the portal will start to impact recruiting on the front end.

Self basically pulled a Charlie Weis pile-of-crap moment with this year’s team. They all should transfer.

Grow up! We get it, you hate Self. Move on to your other favorite teams because Self is going to be here for the long run.

Should've closed our door on 6' or shorter in the first place (with the exception of player who can dunk like Yesufu). What's crazy is if we even pursued this kind of player.

All the best, Latrell.

This year I believe is being used as a test bed for the transfer without a year to sit out. I think that HCBS is using it to his advantage. I think this will allow the NCAA to evaluate whether it is "good" for the student athletes or not.

I like the sit out rule, but I'm not affected by it. I realize that a lot of players get in and realize that it is a different ballgame and want a change. Right now it is difficult to change, does it need to be easier, not my call, but I think this will give the NCAA some thoughts on whether they should implement it permanently, and blame it on the pandemic.

Coach Self will continue to develop players as he has done in the past.

Some have the ability but not the willingness to work through the process with the staff at KU.

Some learn they don’t have the ability to excel at KU and will leave for lesser places where they can excel.

Some won’t have the ability to excel but will stick around just because they are willing to work and recognize the excellence of the staff. Sometimes they leave for just the last year or two of playing more elsewhere. And then there’s Mitch 😎

Coach Self has commented on not being in favor of it, but recognizes it is the way the game is currently being played.

In the end, it should benefit schools like KU who will get the better players while the lesser players will move on to make room.

If you're a KU fan, you should understand we're a big family. Let's be nice to players that have decided to leave the program in good standing. Let's hold off to say things that hurtful to these players. Respect them as they're part of our family. Let's try to be a bit sensitive. Imagine yourself in their shoes. They didn't do anything bad to our program. Let's not be a d*$#.

Yes, and remember that while the players are coached to absolutely ignore these fan boards and NOT read them in order to stay focused and disciplined, I'm sure that they sometimes do. Also that the reality of the situation is sometimes players are literally forced out and their scholly's reassigned to a new recruit viewed to provide more upside; decisions to enter the transfer portal can be as much the coaches' decision as the players. They have the ultimate power over the roster and sadly a dedicated player (like Jossell perhaps) is asked to move on That just the reality of the business side...

Thank you Tony . I jokingly posted last week after TGF and Enaruna left that Jossell was next .
All the best to Jossell ...............on the flipside that opens up a roster spot ........addition by subtraction.