Baylor shakes off early rust, rolls past Kansas for 47-14 win

An unexpected change at quarterback only afforded the Kansas football team a fleeting spark in Waco, Texas, Saturday night.

True freshman quarterback Jalon Daniels led the Jayhawks down the field for a touchdown to launch into the Big 12 opener and his first career start at Baylor’s McLane Stadium. However, that bit of offensive success proved to be an aberration in a 47-14 road loss.

By the end of the night, KU once again looked the part of a program that saw its losing streak in true Big 12 road games reach 50.

“I don’t like finishing second — it isn’t any fun,” KU head coach Les Miles said during his postgame video press conference. “But sometimes the opponent makes you — that’s just the way it goes.”

The Jayhawks’ early TD against a Baylor team that had yet to play in 2020 was followed by six punts, two turnovers on downs, and worst of all, a safety in the fourth quarter before the visitors made their way across the goal line again.

Daniels (19-for-33 passing, 159 yards) manned the QB position throughout, but the offense often sputtered, and dealt with blocking issues along the offensive line once the Bears recovered from their early issues.

Even so, star running back Pooka Williams praised Daniels following the loss.

“He didn’t come out with the victory but he played like a starter,” Williams said, “a veteran quarterback.”

The wheels completely fell off for KU (0-2 overall, 0-1 Big 12) in the second half. If Terrell Bernard’s sack of Daniels for a safety early in the fourth quarter wasn’t the final blow, then Trestan Ebner’s ensuing 83-yard kickoff return for a touchdown did the job, as Ebner became the first Bear in the program’s history to return two kicks for a touchdown in the same game.

KU star running back Pooka Williams rushed for both of the team’s touchdowns, finishing with 14 carries for 76 yards, as well as three catches for 24 yards.

The Bears (1-0, 1-0) by the third quarter shook off any rust that may have kept them from burying KU in the first half.

A heavy favorite, BU finally began manhandling the Jayhawks in the third quarter. The Bears’ first possession of the second half covered 61 yards in nine plays, capped by a John Lovett rushing TD and a 31-7 lead less than six minutes into the quarter. 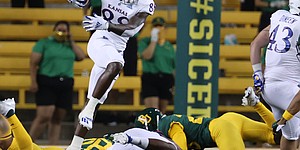 The drive followed a three-and-out for the KU offense on its opening series of the half. An illegal block by Lawrence Arnold cost KU 10 yards off the bat and by 3rd and 4, Bernard sacked Daniels, forcing a KU punt.

BU do-it-all senior Ebner delivered the first serious knock to KU’s short-lived upset hopes on his first touch of the second half.

A Liam Jones kickoff into the front of the end zone to open the third quarter turned into a golden opportunity for Ebner, who broke a tackle on the left side, allowing him to get to the edge out right, racing to a 100-yard touchdown return, the first kickoff TD for BU football since 2013.

The Jayhawks were down, 24-7, 16 seconds into the second half, in large part due to Ebner, who had already rushed for a score and caught a TD pass in the first half.

“He was a great athlete,” KU sophomore safety Kenny Logan Jr. said. “You always have to respect that. I give him kudos.”

The Jayhawks had a chance to finish the first half with a score, despite their last possession of the second quarter starting on their own 28-yard line with 1:09 left.

A Daniels throw to fellow freshman Lawrence Arnold gave KU its initial 1st down and a couple plays later Daniels found Kwamie Lassiter II open over the middle, slinging a 17-yard completion while taking a late hit that moved the ball another 15 yards.

The Jayhawks were at the 33-yard line but stalled out, ultimately opting to go for it on 4th and 11 from the 34, a play that resulted in William Bradley-King sacking Daniels.

BU achieved its first double-digit lead of the night late in the second quarter, and a 15-yard penalty on KU hastened the Bears’ path to the goal line.

After Ebner picked up a 1st down with a 13-yard run to the KU 33-yard line, safety Kenny Logan got flagged for hitting him out of bounds, giving BU an additional 15 yards. On the next snap, BU senior QB Charlie Brewer found Ebner for an 18-yard touchdown, allowing the Bears to go up, 17-7, with 4:13 remaining in the half.

The Bears successfully kept the Jayhawks’ offense off the field for nearly half of the second quarter when the game was competitive, as they methodically completed a 20-play, 60-yard drive that began late in the first quarter.

The 7:54 scoring possession gave BU its first lead of the Big 12 opener, but KU’s defense at least kept the Bears out of the end zone. Freshman cornerback Karon Prunty broke up a 3rd and 15 Brewer pass attempt to get the unit off the field. Baylor went up for good, 10-7, on a 47-yard field goal from John Mayers.

KU might have scored twice before the end of the first quarter if not for a dropped pass. One play after BU safety Christian Morgan got ejected for targeting because he torpedoed into Daniels after the QB slid and surrendered himself to complete a run, sophomore KU back Velton Gardner found himself wide open down the right sideline and Daniels put the ball on the money. But Gardner couldn’t complete the catch as he headed for the end zone.

“You just get a little sick in your stomach when you finish second like we did,” Miles said. “Especially with the idea that you take the lead 7-0 and you have the opportunity with a dropped pass, it could’ve been a (14-7) lead. That’s certainly something I look at more.”

The Jayhawks jumped out to an early lead, thanks in large part to a costly Baylor penalty on the game’s opening series. Daniels’ short completion to Andrew Parchment on 3rd and long in KU territory would have put an early end to the freshman QB’s first possession. But after Daniels found Parchment, TJ Franklin hit the QB late for a 15-yard penalty and free 1st down.

With that gift, Daniels and the Jayhawks capitalized. Daniels fired a 23-yard completion to Stephon Robinson Jr. Two plays later, Williams busted a 21-yard touchdown run off the right edge.

The KU defense briefly kept the momentum going in the visitors’ favor, with a three-and-out against the Bears in their first offensive possession of the year. 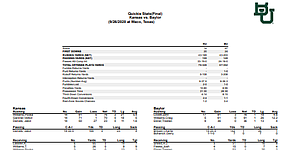 The Jayhawks’ second possession began near midfield, and though offensive coordinator Brent Dearmon called in a deep shot on 2nd down that resulted in Parchment beating the coverage deep, Daniels overthrew his target on the potential 54-yard TD.

A nine-yard connection between Daniels and Lassiter set up 4th and 1 at the Baylor 45-yard line, but the Bears put an end to the series by stopping freshman back Daniel Hishaw short.

The Bears turned the favorable field position into their first TD drive of their season, tying the game at seven a little less than 10 minutes into the first quarter.

Following the 33-point defeat, Miles shared what message he delivered to his team.

No turnovers and down by only ten on the road at halftime is encouraging but was hoping for something more competitive. Can’t really call this progress.

The one positive I take from this game is Jalon Daniels getting an opportunity. He made mistakes, sure, but that's expected as a first game starter for a true freshman. Give him more games, get him experience and time to develop without losing a year of eligibility. Then we may just have our QB of the future ready to go next year.

Can anybody explain to me why they didn't use Pooka more???

As for Daniels, I thought he did very well given the circumstances. He made a few mistakes, but most of his difficulties came because of another rough outing by the offensive line. And I also thought that Daniels showed some really good signs. I definitely feel like he's the best choice of the three right now.

BTW, I assume people noticed that despite the broadcasters' comments about the crowd wearing masks and social distancing, a large part of the crowd was NOT doing that? I've been saying from the beginning that it's insane to be having fans at these games, and the response has always been that with masks and social distancing, it won't be a problem. But it IS a problem, because people are not taking the protocols nearly seriously enough. And that wasn't just in this game; it's happening in EVERY game that allows fans. This is why if they are going to have games, they should ABSOLUTELY NOT have people in attendance.

I won't agree or disagree with your opinion of fans/no fans. But I will agree that protocols are not being taken seriously.

Universities and teams have established protocols but its baffling to watch fans,coaches and players flout those rules. Large groups of maskless fans clumped together was easily detected.

The Baylor coach was wearing a mask -- but repeatedly jerked it off to hoop it up with his players and high five them as they came off the field. Why does he even bother with the mask in the first place?

And the players on the sideline? Who knows. Some wore their masks and some didn't.

The schools and teams publicly support the protocols but in actuality its a charade -- producing nothing more than a slapdash effort to follow them.

It's all basically security theater.

Some people believe that wearing masks is a charade. As for the game, it’s the same old same ol. Nobody can tell me that K-State has that many better recruits than KU, and they went into Sooner nation and won......why? Coaching?...... That Dearmon offense is a juggernaut, isn’t it? Something isn’t adding up.

We have 116 players on our roster, the same as OU. The discrepancy in talent between KU and OU I understand and it makes sense when we lose to them. But K-State and Iowa State? Is the discrepancy in talent between KU and K-State significant enough to explain the discrepancies on the scoreboard? The results on the field would indicate the level of talent in Manhattan is substantially better than what is in Lawrence. And if that’s not the case then it's fair to assume there is a coaching problem.

2 kickoffs to the same guy, returned for tds? reasons to watch ku football: u will always see something new. jfc 🤯🥴🤦‍♂️

Can someone in Lawrence please introduce Dearmon to one of the best running backs in the League. Let him know t1hat he is number 1. Hopefully that easy for him to pick up. If not lets give Dearmon some bus tickets out of town. He has not shown a real exciting offense. I not sure the future is so great with Daniels at Quarterback. Nothing overly special and not as fast as I thought he would be.