1. Improve on the O-line

In the Jayhawks’ conference debut at Baylor, the offense only scored twice on 12 drives. That type of production won’t keep a team competitive in the Big 12, and in order for the offense’s skill players to find the end zone more often, the big blockers up front will have to keep improving.

Hughes, a 6-foot-3, 315-pound senior, said the O-linemen showed at Baylor this past week that they’re capable of learning from their mistakes.

“I think one of the biggest improvements we had from game one to game two was just moving with more speed and with greater pace,” Hughes said. “Just having everybody jell a little bit more as we continue to play together and move together — how everybody’s going to move, how they’re going to step, what type of foot placement they’re going to have.”

Hughes pointed out there’s “a lot more” the linemen can achieve if they view their mistakes from the first two losses as opportunities to learn and develop.

At their best, the blockers have given running backs Pooka Williams Jr. and Velton Gardner the lanes they need to gain chunks of yards. At their worst, miscommunication at BU led to a safety.

“We can’t have that, obviously,” Hughes said of blown assignments and misreads.

The No. 17 Cowboys’ offense has yet to take off the way most of its predecessors have in previous seasons under head coach Mike Gundy. But a lot of that has to do with an unstable quarterback situation, with would-be starter Spencer Sanders hurting his ankle in the first quarter of OSU’s opener.

Sanders may return versus KU, but even if he remains out, freshman QB Shane Illingworth will likely be trying to get senior receiver Tylan Wallace more involved in the passing game.

A Biletnikoff Award finalist in 2018, Wallace was hurt a year ago and has yet to explode back onto the scene in OSU’s first two victories of 2020. So far Wallace, a 6-foot, 190-pound target, has just 10 receptions for 177 yards and no touchdowns.

The Cowboys have run the ball far more often than they’ve passed, but it’s safe to assume they’d like to even out their approach as well as test a KU secondary that plays a few young backs in true freshman corner Karon Prunty, sophomore safety Kenny Logan Jr. and true freshman corner Duece Mayberry.

Wallace has 2,689 career receiving yards and 20 touchdowns, despite only playing in parts of his freshman and junior seasons.

Likely the best thing that happened to the KU offense in its loss at Baylor was that the Jayhawks cleaned up the turnovers that cost them repeatedly in their opener.

But there was some luck at play for KU in its turnover-free outing versus the Bears, with the Jayhawks recovering a couple of their fumbles and the Bears failing to intercept some of the throws by Jalon Daniels that they might have been able to get their hands on.

The OSU defense ranks in the top 25 among FBS teams in nine categories, including third down defense (20.7%), scoring defense (10 points per game allowed) and total tackles for loss (9.0). It’s the best unit the KU offense has faced to date, and the greater the mismatch, the cleaner KU's game needs to be.

Head coach Les Miles explained this week how he and his staff have addressed ball security.

“It continues to be stressed,” Miles said, adding that it begins with the center-quarterback exchange at every practice. “I think there’s a point in time when you don’t overstress it. But I think it’s fundamental in every practice that you take care of the important things. And that ball’s the most important thing of the day.”

A week ago against West Virginia, the OSU defense recorded 11 tackles for loss, five sacks, nine QB hurries and a defensive touchdown.

Whether it’s true freshman Daniels or senior Thomas MacVittie playing QB for KU, the job in front of them won’t be easy. 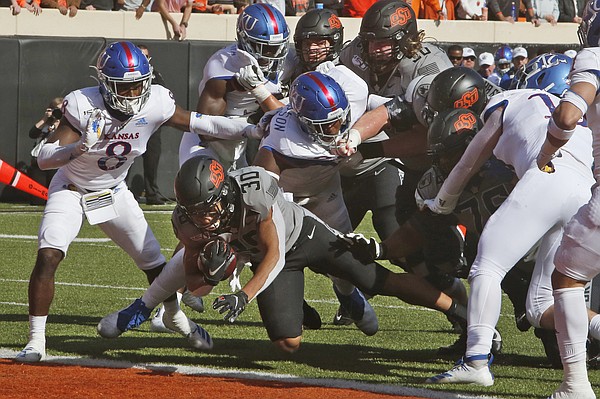 Oklahoma State running back Chuba Hubbard (30) dives into the end zone for a touchdown in front of half of Kansas cornerback Kyle Mayberry (8) and defensive tackle Caleb Sampson, center, in the first half an NCAA college football game in Stillwater, Okla., Saturday, Nov. 16, 2019. (AP Photo/Sue Ogrocki) by Associated Press

The KU defense can expect to see a lot of Oklahoma State star running back Chuba Hubbard. Through the first two games of the year, Hubbard’s 49 carries nearly matches the combined 51 rushes between KU’s top two backs, Williams and Gardner.

Somewhat surprisingly, Hubbard, a talented senior and preseason All-American, fumbled twice against WVU (OSU recovered both) and has yet to deliver one of those massive days that gained him national recognition in 2019.

“He hasn’t made that last guy miss and broke a long one yet,” Gundy told reporters earlier this week. “That’ll come with him.”

Still, KU’s linebackers know Hubbard is capable of much more, and it will be up to them to try and contain the skilled rusher and attempt to prolong his relatively slow start. Last year, Hubbard rushed for 122 yards and two touchdowns in OSU’s win over KU.

The Jayhawks are giving up 4.6 yards per rush entering this week, but Hubbard is by far the best running back they’ve seen. Finding a way to slow or stop Hubbard is the best path to an upset victory.

The scene inside David Booth Kansas Memorial Stadium won’t look quite so desolate for KU’s second home game — unlike in the Sept. 12 opener against Coastal Carolina, the Jayhawks will have fans in the stands today, which the players say will be a welcome change.

“Game one was really weird, of course,” junior linebacker Jay Dineen said. “That’s exciting — have the band in there, get some noise going, have it feel like it’s a home game.”

Coming off a 33-point road loss at Baylor, the Jayhawks will take all the help they can get, even if there will only be 10,000 fans to create that home field advantage. KU’s stadium normally seats more than 47,000 people, but it's operating under a reduced attendance plan because of the COVID-19 pandemic.

“I think it’ll be a lot of fun,” senior receiver Andrew Parchment said of having fans back. “I’ve been talking a little bit to the Jayhawk community about it, some of the fans that I communicate with. They’re very excited to come out there, and we just hope to come home with a ‘W.’”

Our O-line consists of three seniors, a junior, a red shirt sophomore and a tight end who is a senior so their problems are not due to a lack of experience.

It's the usual lack of toughness. K U is the softest, most passive team in America every year. The O and D lines get handled rather easily in nearly every game.
They're never aggressive.

Again your prediction is very kind. Holding OSU under 50 will be an accomplishment.

Holding OSU under 35 by halftime would be nice