No. 1 Gonzaga sprints by Kansas, 102-90, at season-opening Fort Myers Tip-Off 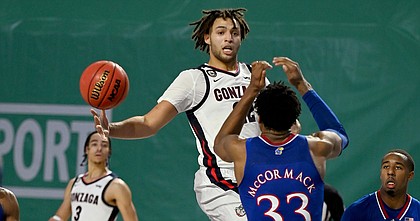 Different season, different team, different result for No. 6 Kansas, which had its 16-game winning streak snapped in a 102-90 loss to No. 1 Gonzaga on Thursday at Suncoast Credit Union Arena in Fort Myers, Fla.

After putting together one of the strongest defensive teams KU coach Bill Self has had at Kansas a season ago, the Jayhawks (0-1) saw the Zags (1-0) carve up their defense from start to finish during Thursday’s high-profile season opener.

Last season, Dayton’s 84 points were the most scored against the Jayhawks. That came in a track meet of a contest in overtime at the Maui Invitational.

Other than that, Texas Tech’s mark of 75 points last February was the highest total allowed by the Kansas defense, which only allowed opponents to reach 70 points or more four times in 31 games last season.

Gonzaga reached 84 with 6:45 still to play on Thursday, following up a 54-point first half with 48 points in the second to send the Jayhawks to their second consecutive season opening loss.

Thursday’s game marked the first time a team topped 100 points in a 40-minute game against the Jayhawks since Oklahoma did it in 1990.

“We certainly have a long ways to go to become good defensively,” KU coach Bill Self said after the loss. “I think we can get there. But we’ve got as long a ways to go as I think I've had pretty much (with) any team to start the season.” 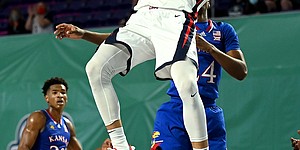 Gonzaga scored 62 points in the paint on Thursday, as sophomore forward Drew Timme exploded for 25 points on 11-of-15 shooting. Right hand. Left hand. Through contact. Timme was unfazed most of the day by whatever obstacles he encountered.

Self pointed out, however, that at least a third of Gonzaga’s points at the rim came in transition, where KU aided Gonzaga’s high-octane attack with early turnovers that led directly to an early double-digit lead.

“I think their speed and how fast they play definitely surprised us early,” Self said.

Added senior guard Marcus Garrett, who scored 22 points in 37 minutes but also tied with David McCormack for the team lead with four turnovers: “It started with (me). That early turnover got them started. We can’t start games off that tight.”

Suggs, who scored 24 points while dishing eight assists, was whistled for a technical foul after barking at Garrett following the dunk and a pair of Ochai Agbaji free throws tied the game at 4. KU did not pull even with Gonzaga again until 15:58 mark of the second half and the Jayhawks never led again after taking a 2-0 lead.

A late run in the first half trimmed the Zags’ lead from 14 down to seven and Gonzaga led by eight at halftime. KU played with better pace and poise to open the second half, outscoring the Zags 11-3 in the opening minutes to tie the game.

Gonzaga coach Mark Few said Gonzaga’s ability to stave off that KU surge, which he estimated he had seen “a thousand times,” came down to the Bulldogs’ confidence and poise.

Despite the Jayhawks’ ability to find their spots in a game that many said had a postseason feel to it, they never could fully slow down Gonzaga’s offense.

GU shot 65% for the game — including a KU worst under Self 77.3% on 2-point shots — and played with the kind of pace and attacking mentality that Self said he had not seen from too many teams in the past.

“I can’t remember the last time we scored 90 and didn’t win a game,” Self said. “From an encouraging standpoint, I think we can score enough points to win games. From a discouraging standpoint, we're not going to beat anybody unless we guard better. But if you're going to find out how good you are defensively, you might as well play the best offensive team in the country and that’s what we did today.”

“Next to Kentucky’s two teams, I don't know that we’ve played against a team where the pieces fit better and the talent matched the pieces,” Self said. “They’re good. They’re really good.”

Clearly happy with the victory, — No. 600 in his coaching career — Few said he was just as happy that his team was playing again and that the two winningest programs of the past decade could stage such a fun season-opening showcase.

Both teams return to Suncoast Credit Union Arena on Friday for their final games at the Fort Myers Tip-Off.

Postgame press conference for Bill Self, Mark Few and Marcus Garrett by KUsports.com

I don't care if Gonzaga is the #1 team in the country; for a Bill Self-coached Kansas team to surrender 100 points or more to anybody is just straight-up despicable. KU had better have their $#!+ together tomorrow afternoon.

You should go full circle and bail on the Jayhawks again by adopting Iowa basketball. Then you can become a full time troll.

Gonzaga might be one of the winningest programs, historically, but that would not be the case if they didn't play in a cupcake conference. St. Marys College, Santa Clara, University of Portland, etc.

I actually am satisfied to know we will score more than I thought this year. If we don’t talk about interior defense this game was not played that bad offensively or in general. Gonzaga had the luxury of well seasoned teams and will not drop off 1 seed line all year. Kansas will clearly have lots of options, but just need time. I feel more confident that we didn’t have scared players on offense.

Now the elephant in the room. Watching McCormick chase a player burn right by him got old and fast.

Dale, you can say the same thing about the Big 12. By definition, a conference can’t be good when one team dominates it for 14 years. And trying to minimize the accomplishments of a team that just absolutely dominated us is about as weak and whiny as it gets.

Brett, there you go again. This game was a much more experienced team playing against a new team, which we are. Yes we have some players back, but we are playing without the two key players from last year. That is something you don't just do without some growth.

The most important thing is the defense. We won't have a stopper, David, will be average at best, more like Landon Lucas, but if he does that and the other players pick up their defense as a team, we can still be very good.

I am also concerned about playing 4 guards around David, I think it puts too much pressure on him. The fact is that having Silvio could have really helped, we could have simply used his 5 fouls to be aggressive, now with just Mitch backing up, good as he is, we are much more vulnerable. I do think that JW may be the key to the season, he is a better rebounder than Tristan, and a little better defender. He must be a much better rebounder if he wants to keep his spot. Fact is there are 8 people besides Marcus, who could be starters, and whoever can play defense and rebound has a good shot.

Depending on who we are playing we may have to put Thompson into the lineup, or at least play him 50% of the time, because we need a second ballhandler, one to take some pressure off Marcus, so he can up his defensive pressure, and two to incease threat from outside.

I am reserving any judgements about this team until 5 games into the season, if we have a winning mark at that time, and we are playing defense, then lookout. Otherwise it could be a very long year.

*Sloppy game for sure. But turnovers and defense can be improved through coaching. It wasn't unexpected for us to be so sloppy, but certainly wish we could have defended better.

*Our guards can score. What a relief that we have guards who cane make 3s. If they turn cold, we'd be in big trouble.

*Defending inside might be our hardest challenge this year. Teams that are really big, like Baylor, will be a matchup nightmare for us on D.

*Why even bother with wearing masks and having the bench seats 6 feet apart? Aren't they all effectively in the same bubble? They are literally all touching the same sweaty ball, but then they must sit 6 feet apart? I don't understand.

I agree w/Brett & Bryce. We should cancel the whole program, burn down AFH, and charge anyone w/KU basketball paraphernalia with a capital crime.

We definitely have an issue w/size, I was less concerned about their ability to score in the paint than ours not to, we missed a few 'easy' shots under the rim. Easy for me to say...I couldn't hit a layup if you gave me an 8' ladder. But I will say I admired the team's fight and aggressiveness. Gonzaga is an outstanding team.

It kills me we couldn't bring home a couple of trophies last year.