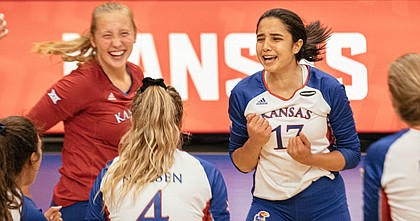 The Kansas volleyball team opened the final series of the fall season with a four-set victory (25-21, 25-13, 24-26, 25-20) over Texas Tech on Thursday night at Horejsi Family Volleyball Arena.

Playing for the first time in a while in a mostly empty venue, the Jayhawks brought their own energy and roared out to a two-set lead.

The Jayhawks nearly pulled off the sweep, but let a late lead in the third set slip away and fell to the Red Raiders 26-24.

KU responded to the hiccup by winning the first five points of the fourth set, paving the way for a 25-20 victory.

As has been the case at different points throughout the pandemic-shortened season, a few freshmen carried the load for the Jayhawks in their latest win.

KU’s kills leader, senior Jenny Mosser, added eight kills in the match but did not have her most efficient night of the season, hitting just .097 on the night.

KU was supposed to play TCU on the road in two weeks to close the season, but that match has been moved to the spring because of COVID-19.