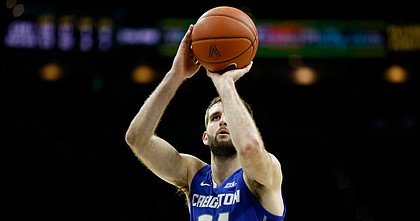 During his upcoming senior season at Creighton, Ballock will finally get his chance to play at Allen Fieldhouse.

That matchup was made official on Wednesday, when KU released the nonconference portion of its 2020-21 men’s basketball schedule.

On Dec. 3, Ballock, his Bluejays teammates and what he hopes will be his entire family will make the trip to Lawrence for a regular-season clash between the two Midwest college basketball powers. 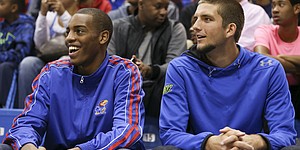 “It’ll be surreal,” Ballock told the Journal-World during a recent phone interview. “It’s one of those childhood dreams, you know?”

“I want to say every time I left the arena I was like, ‘All right, I’m about to commit,’” Ballock said. “But then I had to slow my roll and kind of figure it all out. It’s just that kind of place. It sends chills down your spine, and it’s fun, man.”

To be able to see all of the pomp and circumstance of game night at Allen Fieldhouse as a member of the opponent is something Ballock is looking forward to. Not just because he wants to do everything he can to help his team leave Lawrence with a victory. But also because it will add to the ways he has experienced the historic venue.

“I’m looking forward to that atmosphere,” Ballock said. “I’ve seen it from the stands, and it will be unbelievable to experience it from the court. Just being in there, playing on the opposite bench, will be an unbelievable opportunity and hopefully I can take a moment to soak it all in.”

In 2017, Ballock and the Bluejays played two games in the Hall of Fame Classic at Sprint Center in Kansas City, Mo. Several of his friends and family members from Eudora were in attendance as Creighton knocked off UCLA and lost to Baylor. 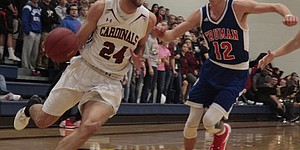 Eudora senior Mitchell Ballock drives to the baseline against Truman sophomore Donald Edmondson during the ...

But the former Cardinal still has yet to play a game with his entire family in the building. And he’s hoping the game at Allen Fieldhouse will end that streak.

“I’ve always wanted to play close to home,” he said. “And it’ll be cool to see a lot of my friends and family from back home all be at a game I’m playing in. Hopefully all of my brothers and sisters and nieces and nephews can make the trip over and see a game live.”

One of the last games Ballock attended in Lawrence was KU’s triple-overtime victory over Buddy Hield and Oklahoma in 2016. He’s hoping his next trip will feature similar high-level basketball, with or without the ovation that Hield got from Kansas fans that night.

Hopefully, the season will be played. NCAA threatening to shutdown the 2020/2021 Sports Year, if participating Universities are NOT opened up for business.

What was the reason he chose Creighton over Kansas?

Had your chance and blew it.

So after all that talk about playing close to home and how great KU and HCBS is, he chose to be a Blue Jay and play in the Big East at CHI Health Center in Omaha rather than AFH in Lawrence. Makes a lot of sense to me. Couldn't conceive of any reason why Matt would want him to ask, "Why?"

I suppose I could've, but that wasn't what the story was about and didn't seem all that important to me. We wrote about his decision back then, when he chose Creighton, and this was a story about his opportunity to come back "home" to play a game at a place he loves against a coach and program he respects.

He's had a nice career in Omaha and KU has been fine without him. Worked out well for all parties involved.

Should be a fun night for him! Just guessing but he probably went to Creighton because he saw an increased probability that he could have a great career. He could work his way into the lineup over the years there and not worry about the next Josh or Andrew to come in and push him back. Also, Vick was a Freshman, Devonte was Soph playing off the ball. Creighton is not a bad school either!

Local kid in search of PT. No problem...
Would have struggled for minutes here.